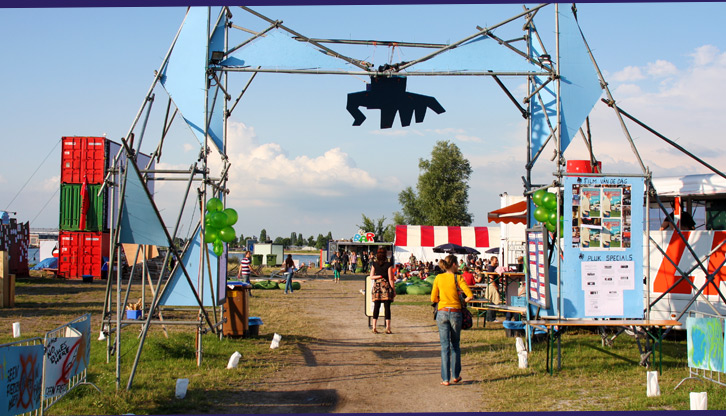 “Open-air cinema as a means to an end,” is how Caspar Sonnen, the driving force behind IDFA DocLab summed up the vision for the Open Air Film Festival Amsterdam (a.k.a. Pluk de Nacht), the summertime tradition he co-founded back in 2003, when I last chatted with him over coffee at Two For Joy in Frederiksplein. He went on to explain that all the film schools and Netflix DVDs in the world can’t capture the magic of cinema like a single collective movie experience can. “Our organizational structure is that of a block party,” he added.

Interestingly, this indie movie evangelist also likened Pluk de Nacht – which, unlike NYC’s similarly spirited Rooftop Films, takes place over ten days in August, screening unreleased arthouse films gratis (and drawing anywhere from hundreds to thousands, depending on the weather, to its Het Stenen Hoofd location on Amsterdam’s scenic harbor) – to his favorite Internet ventures. He cited Wholphin’s playful approach to cinema as a particular inspiration. (In fact, Wholphin’s Brent Hoff – who Sonnen met while on the shorts jury at SXSW – has even served as Pluk de Nacht’s artist in focus.)

Yet when it comes to programming for an outdoor festival, as opposed to for an indoor screening, pragmatism rules and context is key. A Burning Man-size crowd might not want to sit through the latest offering from Romania – or would it? Sonnen surprised me by revealing that his audiences favor narrative-driven films with a strong story over horror and cult flicks.

Perhaps less surprising, since all the films are subtitled in English, is that expats make up a large part of the audience. (“Does it have English and what time does it start?” top the festival’s most frequently asked questions.) Though the selection process runs year-round and filmmakers are always welcome to submit for free, with so few slots (one feature per evening over 10 days – you do the math) chances are better if you’re the type who thinks beyond the big screen. In fact, most of the festival’s new media installation program arrives courtesy of artists who simply offer their work to Pluk de Nacht. And though there is an onsite tent always kept at the ready, there are no rain dates, so if torrential downpours hit the evening of that must-see flick, you’re out of luck. Translating his festival’s jaunty name from Dutch to English for me, Sonnen declared, “It really is Seize the Night!”