From the Filing Cabinet Drawer to the Silver Screen 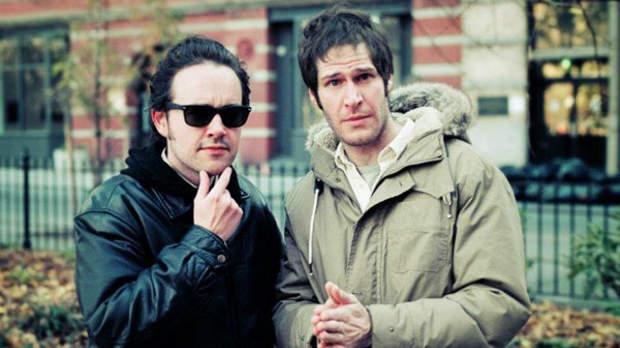 by Jeff Kaplan and Ian Springer
in Filmmaking, Screenwriting
on Sep 17, 2012

“You’re young, you haven’t done anything, and no one wants to work with you,” our first agent said to us after we graduated film school. He was absolutely right. We were trying to write what we thought were mainstream Hollywood comedies but to our shock, it was hard to get the second screenplay we’d ever written to the biggest comedy stars on the planet. That’s when we decided to write something smaller for two local New York comedians who we thought were hilarious and, more importantly, we thought we could get.

Six months later, we had a screenplay about two guys who are total opposites that meet because one of them is sleeping with the other one’s wife. Naturally, the two men hate each other, but somehow, miraculously, by the end of the movie they are able to become the best of friends–hence the title, Bert and Arnie’s Guide to Friendship. We contacted the comedians, who knew Jeff’s work with the directing collective Waverly Films, and they seemed eager and excited to read it. Then they got their own TV show, moved to LA and blew us off.

We were dejected and had no idea what the next step was since we could only envision those two guys as Bert and Arnie. The good news was we got signed to 3 Arts Entertainment based on the script. Our manager sent us out on various meetings and pitches, but whenever people asked us what we wanted to do, we always told them about Bert and Arnie.

Six long years of struggle went by. Ian worked at a coffee shop, Jeff took care of his sick mom. Projects almost came to fruition then fell apart, and we kept putting more and more pressure on ourselves to come up with commercial, high concept stuff that we hoped our manager could sell, but it seemed like the harder we tried, the more forced and unoriginal our writing became.

Frustrated, we finally said, “Screw it, let’s go back to what brought us to the dance in the first place,” and we returned to writing smaller, more character-driven comedies like Bert and Arnie. We didn’t worry about what was commercial, we just started cranking out scripts we were proud of.

Then one day, we heard about a script contest being held by NYC production company, Justified Ends Entertainment. The winning script needed to be ready to shoot during the summer of 2011, as a SAG signatory production. By this point, we had three scripts that qualified and we submitted all of them. Now, we’re used to not getting jobs, being blown off by actors, and generally having the door shut in our faces, so we were surprised when Justified Ends producer Sal Irizarry wrote us an email telling us how much he enjoyed reading Bert and Arnie. We were even more surprised when a week later, Sal and his producing partners Waj Arshad and Jane Basina called to tell us we’d won the contest.

The very first thing we did was go back to the comedians we’d written it for, certain they’d do it now that we had the financing, only to be blown off again! The nerve of those guys! Then a small miracle happened: two different, relatively unknown comedians auditioned, Matt Oberg and Stephen Schneider, and for the first time, we could envision other actors playing Bert and Arnie. Once cast, Matt and Stephen didn’t just give us the performances we wanted, they gave us more than we ever dreamed of. Things got even better when Anna Chlumsky, Adrian Martinez and Cristin Milioti joined the cast. A whole world we’d been waiting to see since 2005 had suddenly come to life.

The shoot itself was a roller coaster ride through a madhouse. We shot a 104-page script with 33 locations in 18 days. A lot of the time we were flying by the seat of our pants, locking locations and casting as we went. Luckily, Justified Ends put together an amazing crew who were not satisfied to just “get it in the can.” They also gave us the look and feel we always wanted: that of the classic New York comedies we love like Annie Hall and When Harry Met Sally.

In retrospect, we’re grateful for the long slog it was to get the movie made. Had the movie happened way back when we’d first written it, we would have been so over the moon to be making a movie at all that we would have been more inclined to make commercial choices ahead of creative ones. Instead, we made the movie we always wanted to make, the way we wanted to make it. We’ve been lucky enough to take the movie around to festivals and when we hear the audiences laughing at Bert and Arnie (aka Matt and Stephen), there’s no question it was worth the wait.

Bert and Arnie’s Guide to Friendship will be screening at the 2012 Williamsburg International Film Festival on Friday, September 21 at 10pm at the Knitting Factory in Brooklyn. Visit www.willifest.com for more details.