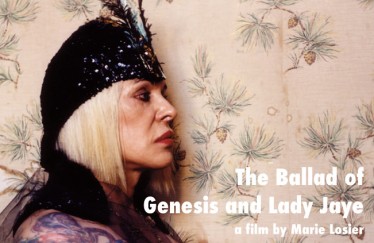 Filmmaker Marie Losier is well known in her New York for her beguiling experimental films, which include portraits of a number of today’s most unconventional and important artists. For the last four years she has been filming Genesis Breyer P-Orridge, artist and founding member of Throbbing Gristle and Psychic TV, among other ventures. Beginning in 1993, P-Orridge began a radical art project with his wife and artist partner, Lady Jaye, in which they both underwent plastic surgery to resemble each other, creating, they said, “an indivisible third,” a “pandrogyne.” Lady Jaye passed away in 2007, and Losier’s film will tell the story of their unique personal project. She has just begun raising money through Kickstarter.

From the Kickstarter page:

This film is about a transformation, a very unusual love story, addressing issues of identity, gender politics and artistic commitment. Through a labyrinthine mise-en-scène of interviews, home movies and performance footage, I hope to tell the story of what I believe to be a truly new kind of Romantic Consciousness, one in defiance of the daily dehumanization of the body by the pervasive presence of advertising and pornography, my attempt to convey beauty, dignity and devotion from a perspective most people will have never seen before on film.

A kaleidoscopic collection of moving surfaces, composed of interviews (Orlan, Peaches, Peter Christopherson, Gibby Haynes), role plays, concerts and his day to day life, comes together to paint a multi-faceted profile of this pioneer of industrial music and in doing so, exposes the abundant yet inherently elusive nature of his creativity.

Losier is modestly asking for $4,000 to cover post-production costs. Please give her more. You can read more about the film at its website. The rewards she’s offering, including silk-screen prints and signed vinyl LPs are pretty great, too.

I’ve embedded the trailer below as well as the Kickstarter widget.

The Ballad of Genesis and Lady Jaye – Trailer from Marie Losier on Vimeo.