The Week in Cameras: Interesting Times Ahead 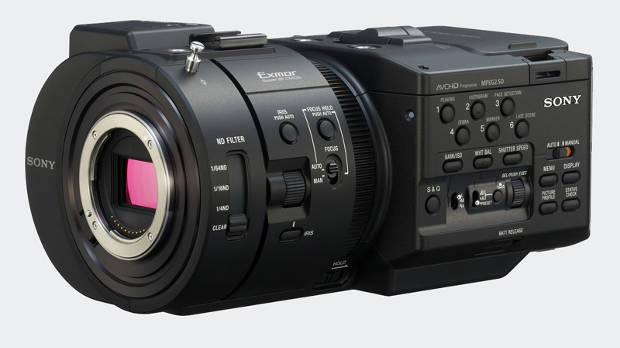 by Michael Murie
in Cinematography, Columns, Filmmaking
on Oct 22, 2012

If the Mayan calendar goes beyond 12, we could be in for an interesting new year. The next few months should see several new cameras being announced or begin shipping, and 4K acquisition becoming almost mainstream.

The New F From Sony

Sony is letting people know that a new “F” camera will be announced October 30th. You can even sign up to be notified here: pro.sony.com

Will this camera replace the current PMW-F3 ($13,000) or perhaps fall somewhere between that and the Sony F65 ($65,000)? It remains to be seen, but October 30th also fits with the time frame for the announcement of 4K support for the NEX-FS700…

Sony NEX-FS700 4K Support
When the Sony NEX-FS700 was announced, 4K support was promised sometime in the future. The camera is now shipping, but it still hasn’t been explained exactly when 4K support will be available, and what it will cost, or what hardware will be required. As recently as two weeks ago, Sony reps were still vague on the cost details, though they did say that more information would be available shortly.

If I were Sony, I’d be seriously thinking of announcing an upgrade of the PMW-F3 to 4K by the time 4K support for the NEX-FS700 was announced.

Canon C500 Shipping
Canon reps say the C500 should start shipping this week. The C500 is the 4K big brother to the C300, though the camera is physically only a little larger than the C300. It’s important to note that the C500 doesn’t include any internal 4K recording capability; you’ll have to add an external recorder to get 4K.

Canon 1D C Details
If your 4K needs to extend to something in a DSLR body, the ($13,000) Canon 1D C may be the ticket. Unlike the C500, it will be able to record 4K directly to internal CF cards, but the shipping date remains uncertain. However, it is half the price of the C500.

Recently, there had been some controversy over whether the 1D C was anything other than a 1D X with different software and $5,000 added to the price. However, multiple sources within Canon have now said that there is a different processor inside the camera.
CanonRumors: The Canon EOS-1D C is Different Than the EOS-1D X on the Inside

Less than 4K – the Sony NEX-EA50
The Sony NEX-EA50 doesn’t offer 4K support, but it is a $3,500 shoulder-mount camera with a large sensor. A couple of initial reviews have already been quite positive. It’s not expected to ship in quantities until the end of the year, but a local dealer told me they were expecting a demo unit in the next couple of weeks.

GoPro Hero3 – 2.7K
It’s not just the big guys with some interesting new cameras. GoPro has announced new versions of their Hero camera that are smaller, sharper, with have better low-light performance. Available in three models, the high-end $400 Black edition will even shoot in 4K, but only at 12-15 fps. Switch to 2716 x 1440 (2.7K) and you can shoot at 30/24 fps. At 1080p you can shoot up to 60fps. While the 15 fps 4K support seems less than useful, 2.7K should be great for stabilizing footage that will be output at 1080p.

With higher bit rates, WiFi support and the ability to add a 3.5mm mic jack using an optional cable, the Hero3 offers several improvements over the previous model.

And more
These aren’t the only new cameras coming our way. Also expected before the end of the year is the full-frame Sony NEX-VG900, and the Canon C100. All in all, the camera choices you’ll have at the beginning of next year will be very different from the ones you had at the beginning of this one.