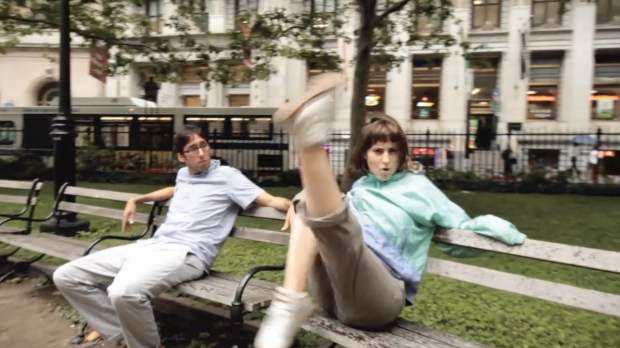 by Nick Dawson
in Directors, Interviews
on Nov 1, 2012

Director and photographer Jacob Krupnick was waiting for a spark to ignite a major creative project, and it came when he was listening to All Day, the 2010 album by mashup maestro Girl Talk. Krupnick’s debut feature, Girl Walk // All Day brilliantly utilizes the entirety of the album, using it as both soundtrack and inspiration for an epic, feature-length music video, the story of a young dancer (Anne Marsen) who escapes for the day to New York City, turning the great metropolis into one big, ever-moving stage. Along the way, she regularly crosses paths with both The Creep (John Doyle), a weirdo in skeleton sweats, and his courteous counterpart, The Gentleman (Dai Omiya).

Since premiering in Brooklyn almost a year ago, Girl Walk //All Day has had screenings all over the country (as well as internationally) that have become legendary for becoming mass dance parties, as the entire audience gets caught up by the funky grooves and irresistibly infectious energy of this wordless dance movie. On the eve of the film’s theatrical opening at Brooklyn’s reRun Theater — as the first movie to play there through the venue’s programming partnership with IFP and Filmmaker — Krupnick sat down to talk about the unique experience of making Girl Walk // All Day.

Filmmaker: Girl Walk // All Day first began life as a dance video that went viral. Was there always an idea to make something bigger?

Krupnick: In truth, it all began with a totally foolish attempt to make a super-long music video in a few days.

The first time I heard Girl Talk’s album All Day, a few switches flipped, and a handful of ideas that were all on backburners started to simmer. I wanted to take on a bigger project than I’d made before. A couple years before, I’d met Anne Marsen, the ultra-talented dancer with an encyclopedic catalogue of dance styles. I’d been feeling a waning love for my hometown, NYC, with all its rules and restrictions. And suddenly, I had the perfect soundtrack for a big idea: to make a feature-length music video that we would shoot in public spaces, and then try to screen in public.

The first fragment of Girl Walk we shared (on Vimeo here) was shot in early January of last year. It was a warm streak, and as snow melted on a warm day, we filmed for an afternoon around the Staten Island Ferry terminal. I’d initially hoped to film it very quickly without much planning. Fortunately, we slowed the production down a bit, and put this “proof of concept” on the internet, where it started to take off. We launched a Kickstarter campaign to raise money for production, and in the months before we began filming, I learned how to operate a Steadicam, gathered supporters and resources, and worked with the dancers to refine the whole idea.

Filmmaker: How “scripted” was the film? It feels very loose and spontaneous, but presumably it must have taken a lot of planning.

Krupnick: Almost all the dance is improvised, although a lot of thought went into what the characters are trying to communicate, and the environment they’re working in. Anne, John, and Dai are all outrageously good at working on the fly, and staying in character as they slalom, stylishly, through the city.

Before we first filmed, I wrote a short script that told the story of a girl quitting her job, taking the ferry to the city, and dancing across the city. As time went on, Girl Walk developed into a 20-page script with very precise reactions happening at specific moments in the music. This was helpful to have, though we deviated from it constantly. I relied on the dancers completely to establish their set of movements. Once I’d been out with them dancing enough, I could imitate their styles (brutally…) to communicate my suggestions for how they might move.

While there are a couple choreographed scenes — The Creep’s dance class, and The Girl’s back-alley boogie — I wanted the whole thing to feel very natural, with the dancers reacting to the world as it is. Working with a tiny team and virtually no budget, this lack of practiced performance became an asset. 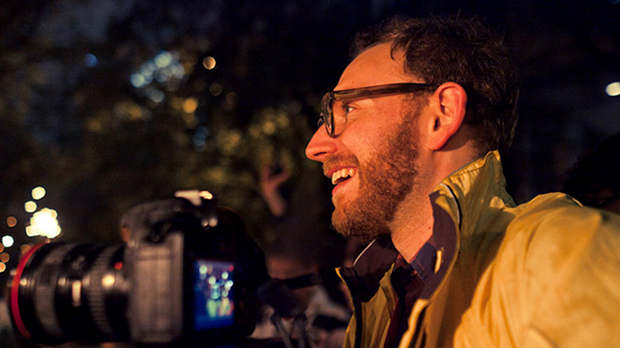 Filmmaker: How did you approach the task of shooting Girl Walk // All Day? You shot in so many locations — presumably without ever having permission…

Krupnick: Making a film is outrageously daunting. Like an island nation, I asked myself what our competitive advantage was. In exchange for not having much money, space, professional equipment, or experience, we had a few key things in our arsenal: fantastic freestyle dancers, a solid idea with a lot of momentum, and an amazing piece of music to work with. As a cyclist, and a New Yorker since age 10, I knew a ton of locations I could draw on for imagining the story.

Girl Walk was developed incredibly quickly. I was listening to the Girl Talk album on repeat, trying to divine a story from it while also scouting regularly with my shooting partner, Sam Petersson. We’d visit locations and talk about how the characters might traverse the city. My wife began managing the onslaught of inquiries and interest in the project. And rather than eschew all this — the classic auteur model — we harnessed the energy to influence the film itself, in one scene using a dozen volunteer camera-people, and in another, a hundred dancing extras.

As for the shooting itself: having been a photographer for 10 years, I know how quickly people get suspicious, and how important it would be to be a lean team in the street. Our cameras, our outfits, our street tactics were all considered to bring as little attention to us and make it possible to move around easily. Sometimes I’d film alone with one dancer; other times we’d have two cameras and a PA, with an extra dancer helping watch equipment. It was thrilling, and also pretty un-glamorous.

Filmmaker: How many hours of footage did you end up with? Can you describe the process of editing the film?

Krupnick: We shot about 20 hours of footage for the 75 minutes that make it into the film. Some people think this is a lot. I found it pretty easy to pull out the really good takes that might add up to a few hours, and then gradually winnow down which takes were the keepers. As far as the process, I’d play about a minute of the track that the footage would eventually be set to on loop, watching all the different takes, and label everything in a way that eventually elected certain takes to the keepers pile.

Once I started assembling the film, I found that many of the most impressive dance moves, or best shots, or most in-sync routines might not be best for the story line. I made several passes over the whole film, gradually shifting the dance moves so that they’d correspond to a rap lyric, or a beat, or a tonal shift in the music.

Because of the nature of the music and the content, I was also play back what I was working on and just smile constantly.

Filmmaker: What was the craziest thing that happened while making Girl Walk // All Day? (I read that you were arrested at Yankee Stadium?!)

Krupnick: Aye. Strange wonders happen when you turn your fate over to chance. Anne fell off the Vespa while doing a standing-leg-lift in Chinatown. John split his groin while dancing in an African weave parlor, which sent the salon into hysterics. We were greeted by heavily-armed security (and fans of the first viral video) on the ferry as we filmed the morning after Osama Bin Laden’s killing. We met Bill Cunningham, who wound up publishing photos of The Creep in the Sunday Styles section of the New York Times. And of course Anne was ejected from Yankee Stadium which I initially recorded with a point-and-shoot camera for our blog, but then decided was perfect material for the film itself.