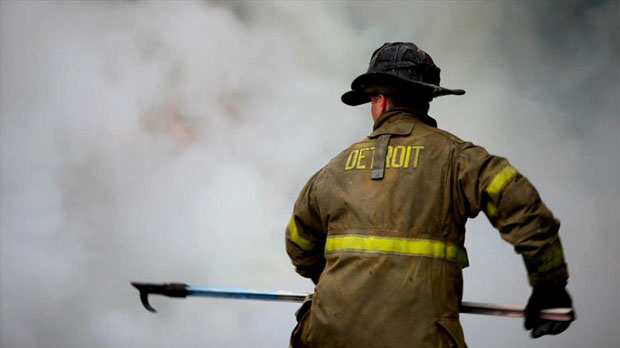 by Kevin Canfield
in Directors, Interviews
on Nov 6, 2012

A news item about a tragedy in Detroit got them started, and by the time they were finished—three years and 1,000 hours of footage later—co-directors Tom Putnam and Brenna Sanchez found that their firefighting documentary had become something bigger than they’d imagined. Burn follows a group of firefighters as they try to contain blazes in a city with an endless roster of buildings left vacant amidst an economic collapse (a topic dealt with in Detropia and several other documentaries). Detroit’s population, as the film notes, is less than half of what it was 60 years ago, and many of those abandoned houses and former businesses have become firetraps. The film is built on vivid scenes that depict the danger facing fire crews from one shift to the next, but Burn also has broader implications, raising a host of issues about the changing texture of 21st century American cities that are being forced to make do with fewer resources.

Burn opens Friday at the Quad Cinema in Manhattan, and is a nominee for the Audience Award at this year’s Gotham Independent Film Awards. (You can vote online for the award here.) Putnam, who has directed several films since being named one of this magazine’s “25 New Faces of Independent Film” in 2003, and Sanchez, a Detroit native who produced, among others, Search and Destroy, a 2010 documentary about her city’s own Iggy Pop, answered a few of our questions this week.

Filmmaker: You two hadn’t directed a film together before. How did you come to collaborate on Burn?

Putnam: Over the 2008 holiday I heard a news story about a Detroit firefighter named Walter Harris who was killed in an abandoned building collapse. I called up Brenna, who is from Detroit and was back visiting her family. I think she called me about an hour later from her old fire station and was already on the case.

Sanchez: We began by asking ourselves the obvious question: ‘Why would someone risk their life for an abandoned building?’ And the answer turned out to be surprisingly complicated. We didn’t set out to co-direct, but it’s a big movie and we’re glad we did it together.

Putnam: We worked on it for three years, and shot intensively for 14 months, filming over a thousand hours. It started out as a movie about an entire fire department, which is 900 guys, and it took a long time and a lot of shooting for the main characters to slowly work their way to the surface.

Filmmaker: In 2011 you made a short called How to Burn a City Down. When did you realize that it could translate to a full-length feature?

Sanchez: Actually the short was something we cut together from footage we’d been shooting for the feature. No one had seen anything since our initial 2009 sizzle reel, which we’d been using to raise money for the film, so we decided to put something together and see if people liked it.

Putnam: Within a few weeks it had gone viral and had been featured in the L.A. Times, the Huffington Post, the Atlantic. It was all over the place. The response to that video and the others we posted after really helped inform how the film came together.

Sanchez: We got to see what struck a chord with people and what didn’t while we were filming. 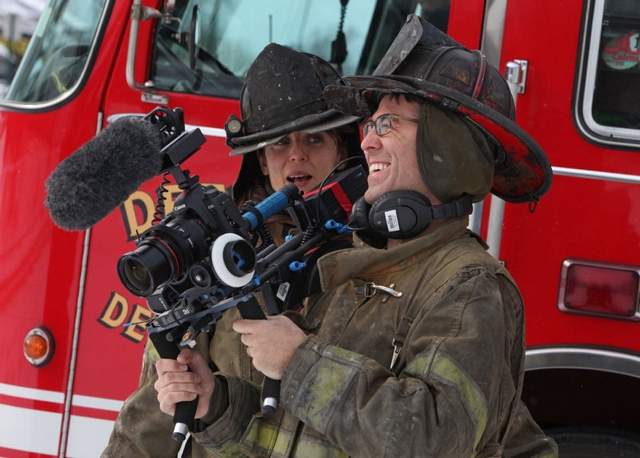 Tom Putnam and Brenna Sanchez during the making of Burn

Filmmaker: Was the making of the film as dangerous as it looks, and did it require unusual equipment that could withstand all that heat and water?

Putnam: Actually we went the opposite way and tried not to have anything that we couldn’t replace. No one had sent cameras into fire before, so we had to do all our own tests, and discover what worked and what didn’t. We had a rule that we never wanted to avoid getting too close, or getting the killer shot, because we were worried about losing a piece of gear.

Sanchez: And yes, it was as dangerous as it looked! The safety of the crew was paramount. We were constantly dodging trucks, equipment, fallen power lines, things like that. Our gear was always secondary. And I’m proud to say that, in three years, no one got hurt and we never lost a camera! We did go through three windshields and a couple of truck bumpers, though.

Filmmaker: The film’s about firefighting, of course, but it also seems to be about so much else that’s important in America today: the fabric of family life, civic involvement, the role of government and unions. How did these themes reveal themselves as you were making the film?

Sanchez: We went into this not knowing where the story would take us. And we discovered that these guys really are a family. Like many families today, they’re facing uncertain economic time, health issues, and an uncertain future. It takes place in Detroit, but it’s not about one city. Now that we’ve begun touring the country with the film, we’re learning that these issues are everywhere. No matter where we are, people feel like it’s a film about them, and the guys who they hope will come to their house when there’s a fire.

Putnam: Many of the issues that seemed Detroit specific when started filming—an eroding tax base, pension cuts, and the role of first responders and city employees—are now popping up in cities all across America. It’s really become a national story.

Filmmaker: You funded this film with help from corporate partners and sponsorships, grants and donations from various other people and groups who believed in the project. What lessons did you learn during the crowdsourcing process?

Putnam: Every cent of Burn was funded with charitable donations.

Sanchez: Most of our funding came in five or ten dollar donations through Kickstarter and Fractured Atlas. Through that process we learned what appealed to people about the story we were telling, and it really helped keep us honest. We have over 4,000 donors, so if we didn’t do it right we knew we’d hear about it! And that really helped, because we were always making the film with an audience in mind.

Putnam: That’s one of the reasons the film is so action-packed, shot in 2.35 widescreen, and feels like an action movie even though it’s a documentary. We wanted to make a film that guys like the firefighters would want to watch and that could hold its own against anything else at the multiplex.