How to Make Your Own Movie Poster 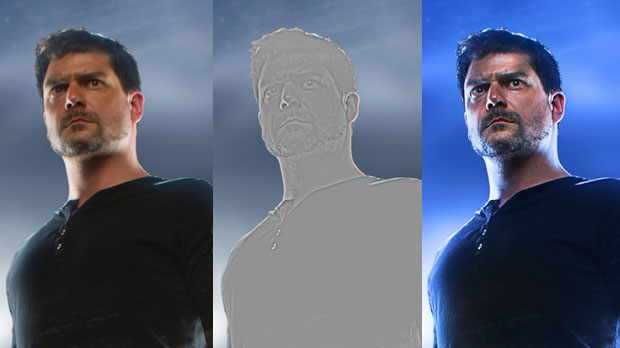 by Zak Forsman
in Distribution, Filmmaking
on Nov 19, 2012

Every movie deserves a great poster. It’s the visual signature that establishes the world, the stakes and tone of the movie, but is also the familiar and identifiable touchstone that (potential) fans will see as it pops up online, at festivals and while browsing their VOD menu.

I want to start by noting that for better or for worse, I kinda get off on “leaping without looking”. Maybe that’s a flaw but I don’t have much patience for formal training. So take this breakdown with the knowledge that there may be better ways to do things, or techniques I’m flat-out unaware of. That being said, I’ve picked up a thing or two while stumbling my way through designing movie key art and thought I’d share the steps that went into creating a poster for Down and Dangerous.

Early on, it became pretty obvious that different designs would serve different needs. Our main character is a uniquely principled cocaine smuggler who goes by the alias “Paul Boxer”. We wanted one iconic poster that presented the world he inhabited and that this world had been metaphorically “turned upside down”. From this we settled on the image of an armed Paul Boxer inverted in the reflection of a cocaine mirror. A second poster was conceptualized with an emphasis on the action in the movie. It would feature Paul Boxer having just delivered a devastating punch to a faceless adversary. In this breakdown we’ll focus on the first design.

We began with a photo shoot at the studio of NITSCHKE+REESE, gathering hundreds of low-angle, high resolution, stills of our lead actor, John T. Woods. We refined the pose and opted for an aggressive lighting scheme that would instantly pop against any backdrop we would place him against.

The next step was to select an image. This took a couple days because I can be a little indecisive when I know a choice is going to last forever. I pulled it into Adobe Photoshop and started by creating an image mask to cut John out from the black background.

I then created a document that was two inches wider on each side than the standard one-sheet size of 27″x40″ to give it some room to bleed. Within that, I inverted the image of Paul Boxer and experimented with how he’d be placed against the background, with temporary placeholders for the title, tagline, and room up top and bottom for a review quote and billing block.

Once I was happy, it was time to bring in the cocaine elements that would sit atop the image’s mirrored-surface. These were photographed in my living room with a single LED light, on a large mirror my mother bought me many years ago, surrounded by black duvetyne draped on c-stands. In the movie, we used an artificial sweetener called mannite, which is something my father used to cut the cocaine he smuggled as it was harmless and very similar in look and texture. But for the poster, I opted for the slightly lumpier qualities of corn starch. In the cocaine world, lumps are a sign of a quality product.

The original design called for a large pile and three rails of cocaine along the top. As well as a pile at the bottom, and striations throughout the center. And we even presented this version of the poster to our Kickstarter backers in a private update. But I wasn’t satisfied with it. Attempts to place text over the cocaine at the top and bottom were hard to read, the sense of it being a reflection in a mirror was harder to grasp, and on the whole it felt too cluttered.

So I returned to the raw elements I had, taking more care in their placement and finally landed on a layout that was cleaner, less cluttered and free of white powder anywhere text would be placed. Now I could focus on touching up the image using three techniques: high pass filters, color grading, and the dodge and burn tools.

To create the added intensity that high pass filters can give, I started by duplicating the image layer of Paul Boxer two times. On the first, I did a medium filter pass and on the second I reduced the amount to a fine rendition of detail. I changed the blending mode of both to “Overlay” and adjusted their opacity until I got a level of “pop” that I was happy with.

When I began working on the color, the intent was for a nearly monochromatic blue look so that Paul Boxer’s warmer skin tones would cause him to standout. This was accomplished by experimenting with adjustment layers for exposure, photo filters, levels, curves and saturation.

Next, I went in for shading Paul Boxer’s face, arms and more. The dodge tool will lighten areas and the burn tool will darken them, so you can create more dramatic shadows and highlights than you had in the original photographic element. I reduced the intensity of the brush to anywhere from 10% to 50% and went to work shading along his bone structure, while carefully brightening the eyes which had grown a little red from the color grading step.

Now it was time to tackle the title, the billing block and everything else. I wanted it to feel unified so I limited myself to two variations on the font, Helvetica Neue 93 Black Extended Oblique and Helvetica Neue 33 Thin Extended Oblique. The exceptions being the ultra thin font used for the billing block and the logos at the bottom. I also limited myself to three font sizes so that no matter what it was used for, it would be consistent with usage somewhere else. Further, I was careful to line up the text at the far right and left to give it a sense of order, despite the extreme 12 degree angle most of it was placed on. Adding a simple gradient and thin drop shadow gave it a bit of silvery dimension that looked much better than simple white text.

And last, I wanted to add a bit of cinematic light to do two things: I wanted to emphasize the 12 degree angled “lines” that the cocaine and text had established, while adding a splash of ornamentation and flair (not just flare) to the title text and Paul Boxer. For this, I actually took a reference file into After Effects and designed the lens flares around it. Then I turned off the reference layer and exported the single frame After Effects composition and brought that into the poster. I set its blending mode to “screen”, and made additional tweaks for color and contrast until it suited the design.