by Scott Macaulay
in Filmmaking, Post-Production
on Mar 14, 2010

The genius of the Jason Bourne movies is their welding of existentialist inquiry with the demands of the thriller in a globalist age. Adapted from Robert Ludlum’s series, Doug Liman and screenwriters Tony Gilroy and W. Blake Herron established the template with The Bourne Identity, locating their film’s MacGuffin not in the outside world but under the skin of its hero. As ex-intelligence operative Jason Bourne skips from city to city, pursuing clue after clue, he is ultimately investigating not a case but his own identity. What kind of man was — is — he? 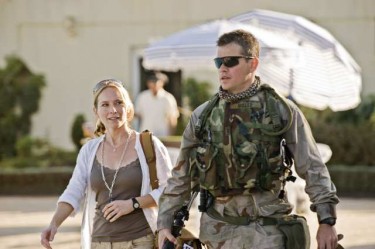 For my money, the first Bourne movie is the best (maybe just because it’s the first, and the fresh concept is so satisfying), but Paul Greengrass’s agitated camerawork and sophisticated editing made the next two more than sequels. As a director, Greengrass organizes physical space with the relentlessness of a search engine, mirroring the panoptical information state that exists around us. Of course, by doing so he accentuates the films’ central irony: in a world in which everyone can be tracked, followed, and indexed, Bourne searches for a kind of gnosis that can not be physically represented. He thus becomes a fascinating filmic protagonist. Is he a hero or a villain? We — and he — don’t know.

Less concerned with character and identity, Greengrass’s recent non-Bourne films are more broadly epistemological in their concerns. United 93 fixes on screen what remains unknowable as well as debatable — what really happened on board the downed flight on September 11. By reconstructing these events within a Hollywood picture, Greengrass implicitly poses questions about the relationship of politics and ideology to history. These issues are tackled again, head-on, in his latest, The Green Zone, in theaters now. Matt Damon is now Miller, a U.S. Army officer showing no traces of Jason Bourne’s inner conflicts. Commandeering missions to unearth weapons of mass destruction at sites identified by “human intelligence,” Miller comes to believe, first, that these leads are faulty and then, finally, fictitious. The camera jitters and the score pounds as Miller searches for “the truth” — not for evidence that weapons of mass destruction exist in Iraq but for the knowledge that there are people who know that they don’t. 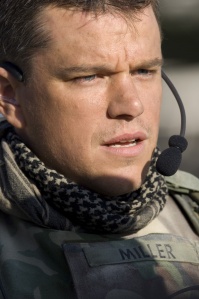 Set in the months following the fall of Baghdad, The Green Zone is, as critic Todd McCarthy wrote in Variety, the first mainstream Iraq war drama to assimilate the critique of the post-war U.S.-led occupation found in Charles Ferguson’s essential historical corrective, No End in the Sight. Rather than the “everyone in the foreign policy establishment” who supposedly endorsed the WMD argument—currently being recalled by Karl Rove on his book tour—Greengrass remembers other key figures of the time: the preposterously self-serving Ahmed Chalabi, the discredited Iraqi informer Curveball, the gullibly cozy Judy Miller of the New York Times (here transposed to a Wall Street Journal reporter played by Amy Ryan). The film is credited as being “inspired by” Rajiv Chandrasekaran’s Imperial Life in the Emerald City, a blackly comic depiction of life inside the Green Zone. I haven’t read Chanrasekaran’s book, but my guess is that little of it remains on screen other than a scene in which Miller, in his military uniform, goes to meet a regional CIA analyst played by Brendan Gleeson while young members of the Coalition Provisional Authority cavort around a giant swimming pool.

Despite his film’s source material, Greengrass is not interested in satire, or social commentary. He has resisted the urge to make the M*A*S*H of the Iraq war, riffing, instead, once more on man’s quest for knowledge. If the Bush administration became more aggressive the more roundly it relied on ideology rather than empirical facts, Miller does the opposite, becoming more of a macho action figure the more armed he is with the certainty that his government has been lying to him.

As it plays faster and looser with recent events, however, The Green Zone becomes intriguingly and not unrewardingly problematic. By the time Damon is told that “the fate of a nation” lies in his hands, The Green Zone flirts with an Inglourious Basterds kind of alternate history making. (I would have loved to have seen what Greengrass and scriptwriter Brian Helgeland would have done if they had freed themselves to pursue such an approach.) The movie ends on a note that in thriller terms is somewhat of a let down. I won’t reveal it here, but as you leave the theater I suggest you do a mental edit and cut in the last line of one of my favorite movies, Three Days of the Condor, and see how that plays. Still, as imperfect as its ending is, The Green Zone carries a punch after you leave the theater. It throws you back to 2003 and makes you wonder why the knowledge gathering dramatized so skillfully by Greengrass, Helgeland and Damon has led to so little accountability in the real world. The action heroes of Greengrass’s films have a will to know, but the film also reminds us that there is a collective will to deny or, simply, forget, and these are powerful urges too.