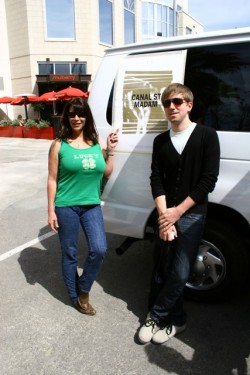 Cameron and I went to pick up Jeanette Maier (the subject of our documentary, and the former high end madam of New Orleans) from the airport in our “Madam-mobile” which is what we’re now calling the 8 passenger van that we ended up renting when we got to town. It’s all they had left, because there are so many folks in town for SXSW and of course everyone had already booked the more subtle smaller cars. While we were waiting, the airport cop grilled us about what we were doing there, because apparently last year there were unmarked vans trying to pick up unsuspecting SXSW festival goers and charge them for a ride to the convention center. So we got out and taped some of our film posters on the side of the van.

Jeanette got a kick out of that, and she loved the poster (re: photo of Cameron and her in front of the van). As we drove into town, Jeanette told us how excited she was to be back in Austin. She hasn’t been here since the ’70s when she came here hitchhiking and started to work in prominent Austin houses, part of the national prostitution circuit.

We had a television interview up on the “smoking deck” at the Austin Convention Center, which is the headquarters for all three conferences, and generally where everyone hangs out between panels, events, and films.

I’m enjoying running into people I know from previous projects I’ve worked on and meeting new people too. It’s generally a relaxed and friendly atmosphere. Getting into the film parties and sponsored events feels hassle free compared to some other festivals I’ve been to, and that makes it easy to meet people and have a good time! Last night a bunch of us went to the Florida Fish Fry party (free drinks and food), the Gay bloggers party (where I had my first red bull and vodka), the Bejing Taxi party (live music), and the Putty Hill premiere afterparty (where I had the best thai cart food EVER). Maybe we were blowing off steam before our premiere the next day (TODAY!!!) and also being a little nutty, but everything is so accessible and walking distance, and I’m loving this friendly Texan town. — Mridu Chandra