A Teacher, filmmaker Hannah Fidell’s feature debut, focuses on the increasingly unstable Diana (Lindsay Burge), a young teacher carrying on an affair with her underage student. But the film is not too concerned with the shocking or tawdry details of this central relationship. Instead, Fidell turns her focus inwards towards Diana’s subtly crumbling mental state, treating her gradual self-destruction as the focal point of tension. It’s a subtle and precise work, and surely one of the most unnerving selections of this year’s Sundance Film Festival.

Filmmaker: Like your short The Gathering Squall, which was based on a Joyce Carol Oates story, A Teacher tells the disconcerting tale of a woman in crisis. What draws you to these types of stories?

Fidell: Well, I like other types of movies too (Bad Boys 2 is in my top five favorite films of all time), but I think the concept of “write what you know” is kind of true in my case – not in the stories themselves, but I can find bits of myself to put into characters that make them seem real. I am an only child and spent many wonderful years creating elaborate multi-character worlds alone in my bedroom. Writing screenplays isn’t really that different.

Filmmaker: Were there any particular influences – be they filmic or otherwise – that inspired your process on A Teacher?

Fidell: In terms of narrative inspiration:, Funny Games, The Piano Teacher, Lolita, House of Pleasures, Opening Night – those are all films that made me feel like I was kicked in the stomach, that left me gasping afterwards, wanting more. For A Teacher, I had to figure out how to force viewers to go along for the ride even if they didn’t necessarily like the main character or what she was doing. I knew that if I couldn’t get that right, the movie would fail.

I rewatched all of the Jean-Pierre and Luc Dardenne’s films. They always keep their actors moving, doing physical tasks. Their films are also often shot very close up, creating a sense of real unease that I thought was important to bring to A Teacher.
Andrew Droz Palermo (the film’s DP) and I referenced a lot of the camera movement found in Boogie Nights during pre production. 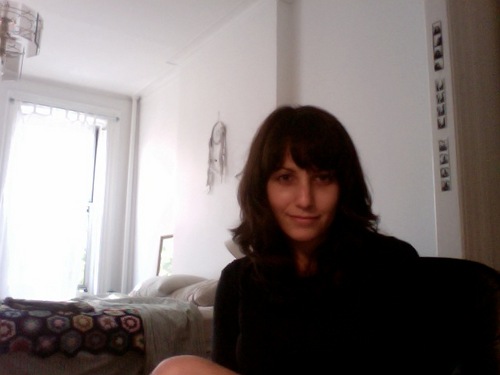 Filmmaker: How did you meet Lindsay Burdge? Did she bring anything to the role of Diana that you didn’t expect?

Fidell: My first real job out of college was at the front desk of a commercial production company. Lindsay’s boyfriend was a director there and she sometimes would produce his music videos and commercials even though she had studied acting at NYU. We became friends and I cast her in a featurette I made in 2009 called We’re Glad You’re Here. Lindsay is an incredible actor – she is full of expression and emotion and isn’t (as cliche as this sounds) afraid to expose herself. The whole film is littered with Lindsay-isms, from her facial expressions to the way she had hair and make-up do her hair…she brought a lot more to the role than what was written down on the page.

Filmmaker: How did you get yourself into Diana’s headspace during the writing process? What was it about her character, and her relationship with Eric, that intrigued you?

Fidell: Having just moved to Austin I was honestly feeling very lonely and isolated. I put a lot of those feelings into the character of Diana. These stories are so fascinating though, because in my research I learned that the real life female teachers who have affairs with their students are often around my age. And honestly, who isn’t intrigued by the teacher/student story?

Filmmaker: The film keeps hardly any critical distance from Diana – it never feels like you are passing any kind of judgment on your character’s actions or motivations. Was this intentional? And if so, how did you settle on this tact?

Fidell: Absolutely. This was very much intentional. And I’m so happy to hear that it comes off that way (you can never be sure how other people will see or understand your film). I didn’t want to place blame or judgment because, honestly, what intrigues me is not why their relationship is what it is, but how.