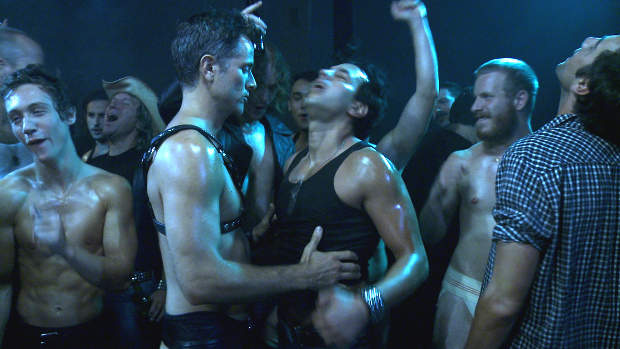 by Julian Hoxter
in Directors, Festivals & Events, Interviews
on Jan 19, 2013

San Francisco-based gay filmmaker Travis Mathews built his reputation as one of the leading figures in the latest new wave of gay independent cinema on the back of a series of award-winning intimate, confessional documentary films about young homosexual men, In their Room. His first narrative feature, I Want Your Love, explored gay friends negotiating their way towards and through sexual relationships and featured unsimulated sex. His new film, Interior. Leather Bar, co-directed with the actor James Franco, is just as honest in its depictions. This film within a film begins with a re-imagining of the lost 40 minutes of William Friedkin’s controversial 1980 thriller Cruising and expands to engage with wider issues of creative freedom explored in frank “behind the scenes” sequences with cast and crew.

Julian Hoxter worked as a story consultant on the film, and he sent Filmmaker this conversation with Matthews done with Matthews while he was packing for an early morning trip to the Sundance Film Festival.

Matthews: One of the things that James wanted to do was make a queer film. The thing that’s the most queer about it to me is that it really does resist easy categorization. It’s a movie about movie making. It’s a movie about celebrity and what people do to be part of a celebrity project. It’s definitely about boundaries around sex and sexuality. Originally the Berlin Film Festival put it in the documentary section, ‘Panorama’. And then I got an email a couple of weeks ago that said they were moving it to the fiction section.

Filmmaker: How long did the project take to come together?

Matthews: James contacted me because he was interested in revisiting a series of movies from the seventies. He didn’t want to remake Cruising, but to do something that was a nod to it. And he knew that he wanted there to be real gay sex, but he didn’t feel totally comfortable tackling that himself. So that’s where I was brought in because at the time my first feature, I Want Your Love, was doing festivals and that movie has unsimulated gay sex woven into the narrative. From the first time we talked to the moment we went into production was four weeks.

Initially I was trying to nail down a lot of things, and then loosened up once we decided the making of the film was going to be as important as the film within the film. I think that was the best choice because it allowed us to do so many more things than just recreate these forty lost minutes of Cruising. On a very practical level it allowed us to be forgiven for shaky cameras or for audio that was imperfect. But it also allowed us to address real life subjects that were parallel to Cruising in some ways.

Filmmaker: So, unlike your preparation for I Want Your Love, you went into production with a kind of treatment more than a screenplay?

Matthews: It just made sense to put in guideposts, rather than dialogue, because it was important for it to seem honest. I’m not going to write down what is in James Franco’s head. There were a few things I felt were important for them to cover, but once they started talking they were just bouncing off each other.

Filmmaker: How did you approach the casting process, given the nature of the material? I know that in I Want Your Love you spent a lot of time discussing the potential consequences of the work for your actors’ lives, is that how it was on Leather Bar?

Matthews: We ended up casting people two ways. I looked back at people I had worked with before and contacted some guys I knew who lived in LA. And then we had a casting call in Playhouse West, which is where James first studied acting. About fifty guys came and all they were told was: “Gay bar scene. James Franco project.”

I was stressing to them that it would be a very gay space, there was going to be gay sex happening and they were going to be around it. They weren’t necessarily going to be participating, but they had to have a certain comfort level. And so at least a third of the guys got up and left. What ended up happening which was hilarious – and I wish that was filmed – I ended up telling guys to go to different corners of the room based on their comfort level. So it went from: “I’m over in this corner and I’m comfortable being part of this project but I don’t want to take off my clothes and I don’t really want to touch another guy.” In between there were a few other groups, like: “I’ll kiss a guy, but that’s as far as I’ll go.” And on the far end there were guys who were like: “Sign me up, I will do anything. This sounds fun.”

Initially I thought we shouldn’t cast any of the guys who had an issue. And then it became clear that it was going to be an important aspect of this sort of arbitrary homosocial space where we really weren’t sure what was going to happen and there was a lot of mixing things and ambiguity. I’m glad that we didn’t just include all guys that were like “let’s go!” It was a good mix of different people that added a very particular feeling to the film I think.

Filmmaker: You shot in two days, and the post production took a month. You edited back home in the Midwest?

Matthews: I was in my bedroom and my mom was always around and she was always the one who saw the first edits. I had this celebrity gay sex movie that I was editing that my family was supportive of — that was when the whole weirdness of this experience started happening for me. I don’t think it was until I was home, looking at my footage in my childhood bedroom that it really hit me.

Filmmaker: Is there anything you didn’t have time to do, or that you regret not being able to do?

Matthews: Yes. Our movie is 60 minutes long. We’d never have been able to do this, but if we’d known where we’d be now we could have really filled it out to be a ninety minute feature. But the biggest thing that I would want to redo is the sound. We used lavs and sound that was on the cameras and there was never a boom. Both the colorist and the sound editor that worked on this film did an amazing job cleaning it up because it was in rough shape.

Filmmaker: How are you feeling on the eve of Sundance?

Matthews: I don’t know what’s going to happen. I hope we sell it and make enough money that I can at least get by in my frugal existence for another year and live to make another movie. I think it’s going to be well received in Europe and I think that there’s going to be a strong interest in it. We have all this buzz going into Sundance which is great. You know, there’s “Sundance fever” and whatever that is, I probably have it. I’m going to let myself dream big around this and realize that a lot of things probably won’t come to fruition, but some of them will.