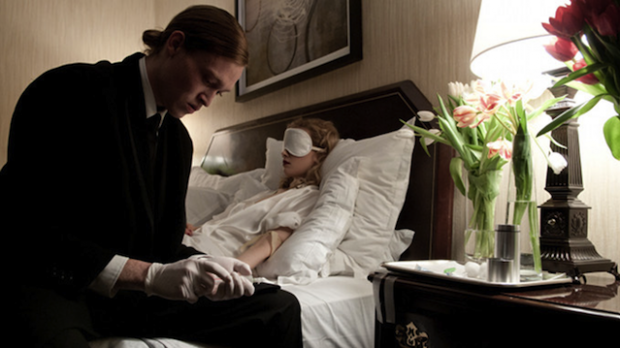 Imagining a future in which celebrity worship has become the new world order hardly strains the brain, but first-time filmmaker Brandon Cronenberg’s Antiviral creates this scenario with such casual logic and vivid detail that very little imagination is required to make the leap from current reality to future absurdity. In this world, we no longer want to hear, as a society, that stars are just like us, we want them to be other, god-like. There is also a yearning to be close to them; the ritualistic collection of autographs or buying Kim Kardashian’s used hair dryer on eBay has morphed into a desire for a more intimate bond; having strains of a star’s virus directly injected into the blood stream in order to feel what they have felt, to have something that was once inside of a god inside of them. Syd March (played to menacing, rabbity-eyed perfection by Caleb Landry Jones, a departure from his roles in Friday Night Lights and as Banshee in the latest X-Men series) works for a clinic that offers such injections. Though employees are generally expected to remain above the obsessions of their clients, Syd can’t pass up the chance to carry a strain of a virus that resided within Hannah Geist (Sarah Gadon). When a fan injected with the same virus dies of the disease, he knows he is in trouble.

The fever (pun intended) for celebrity communion is exhibited in myriad other ways throughout the film, from the day-to-day pervasiveness of public advertising to the consumption of human flesh steaks made from the stem cells of the rich and famous, like the symbolic eating of the blood and body of Christ made literal (and putting the controversy over using stem cell research for the purpose of creating healthy organs in perspective). The desperation to be close to cultural idols is not just about forging a connection with the celebrity in question, but human connection in general. This near-future society’s shared love for a “higher power” allows for the kind of collective experience lost to the middle class minions of Antiviral, deeply dependent on technology, living in a gray world of coldly decorated apartments and even colder offices. Syd, in particular, seems to lead a life of isolation, awkward-bordering-on disdainful in interactions with his coworkers, which partly explains the need to inject himself.

It is impossible to resist comparing Antiviral to the work of the director’s father, David Cronenberg (hence known as Cro-Alpha), and not simply because the two are blood. First of all, one of the ways in which Antiviral best succeeds is as high-concept body horror, a genre that Cro-Alpha basically helped define in his early work. Those films often start off with a gritty aesthetic and busy frame (the term “wet look” comes to mind when remembering The Fly specifically). The people populating these films dissolve into the grotesquerie around them. Brandon Cronenberg (henceforth known as Cro-Beta), however, begins with an environment that is alarmingly sterile, all bright whites and shiny chrome, allowing the subject to discover the grotesquerie underneath — from back alley clinics to vivid fantasies of bodies merged with machinery, rusty blood and metal bone — as he faces the consequences of his actions and the emptiness of his soul. The descent into literal darkness mimics Brandon’s descent from the tidy façade of life into its very messy reality.

Cro-Beta also chooses to echo some of his father’s favorite themes of futuristic dystopia and social disconnection. Comparisons have been made mostly to Cro-Alpha’s earlier works, but like Antiviral, the pater’s most recent film, Cosmopolis, also deals with a not-so-distant future that is not exactly post-apocalyptic (currently de rigueur), but seemingly teeters on the brink of destruction caused more by slow social and economic breakdown than instantaneous biological or environmental catastrophe. Unlike many powerful voices in film criticism, I was not at all infatuated with Cosmopolis, which left me feeling a bit like a robot had just ejaculated into my skull. More to the point, that film is practically, and I believe unintentionally, retro-futuristic; a vision of today as conceived of yesterday. Although the Don DeLillo novel it adapts is from 2003, the underlying concepts feel dated beyond those 10 years, the concerns of men coming of intellectual age in the 1980s, when the foundations of the modern American were being built. Beneath the Guy-Debord-on-meth marathon of philosophizing chit chat, the bottom line of Cosmopolis is that capitalism is bad, very bad, and will gradually cause the dissolution of community. Although there is no satisfying thrust to Antiviral, a failure to follow through and the ultimate message murky and most likely somewhat trivial (is it that celebrities aren’t really your friends? Or that we all die alone? Well, so what about it?) it is a far more visceral experience, its (admittedly convoluted) vision more vital.

In his book Physics of the Future, Michio Kaku explains what makes seemingly impossible visions of the future, like his own and those of Jules Verne before him, plausible. They are logical, quantifiable extensions of current technology, projected at a rate that that technology is likely to evolve. Good fortune telling, in film as in science, considers the wants, needs, and preoccupations of the present, because they are what will shape the breakthroughs of the future. Films like Scanners and Videodrome perfectly capture 80s apprehensions about changing technology and the world to come; despite its shortcomings, Antiviral does the same, and more effectively than Cosmopolis.