Leviathan is a Nonfiction Game-Changer 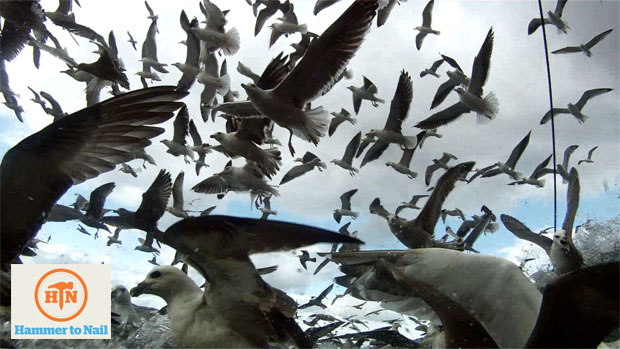 A staggering thrill-ride of an experience, built on moments of astonishing cinematic immediacy, Leviathan marks a major leap forward in nonfiction filmmaking. It’s certainly not a film all viewers will respond to, but as someone who makes documentaries, I see Leviathan as the future. The progeny of direct cinema, experimental film and ethnography, Leviathan uses new cameras and an inventive technique to create something bracingly distinctive.

Ostensibly a portrait of a high-stakes commercial fishing ship off the coast of Maine, Leviathan is an uncompromising immersion into a specific mini-universe, a series of rigorously constructed impressions that become transformations. A net filled with hundreds of pathetic, trapped fish opens up violently, submerging the camera and transforming the image into a Stan Brakhage-like study of light and sound. An injured bird’s sad attempt to escape a shaft becomes a portrait of Hell. A tightly framed shower scene perfectly exhibits the vulnerable human body, so in need of this monster sea vessel to carry out its will on the world. These transformations from observation to abstraction (and back again) create something wild and original. Every edit opens a new way of seeing, every swooping, dropping camera movement invites a new way of sensing this urgent and truly frightening environment.

You think about a lot while watching Leviathan. You wonder about these men’s lives (and they are all men — the only woman that shows up is as a tattoo of a mermaid), how much they’re paid, if they’re happy, how bad they smell. You also can’t help but think about how the film was made. The directors-as-cinematographers didn’t capture many of these images; well-placed cameras did, their unfeeling lenses never flinching or turning away. Small GoPro cameras are mounted on helmets, cranes, chains, ropes, anything, everything, creating a disorienting visual experience that is part game (what are we looking at?) and part exercise in radical subjectivity.

This is a film about labor, bodies, cameras, water, process. The images — like the brutal beauty of dying fish slapping against the lens or the half-smile of a mutilated stingray — are hypnotic in their smeary digital video expressionism. The brilliant audio design is the sound of a slow motion horror film, perfectly rendering with machine-ghost howls the overwhelming experience of this beast-like boat, directed by working humans, leaving death in its wake.

Castaing-Taylor and Paravel frequently use extreme close-ups to inventive effect. Details — like dirty scratches on an elbow, relentless sweat, dangling cigarettes — are slices of masculine experience, their closeness to the camera is visceral and unnerving, clarifying the harshness of the work while simultaneously abstracting the human form. This creates a tense push-pull with our expectations of filmic identification. The viewer is on this ship, feeling intensely the scary reality of the sea, yet, at the same time, we remain objectively distanced.

Perspectives shift from a crewmen’s point-of-view to that of the fish to that of the water, with the emphasis always on the sensory. This is a new way of identifying with characters in a movie, with the environment they’re in and with the drama of experience.

This radically new type of identification culminates in a playful scene where one of the men (mermaid tattoo guy?), apparently watching the TV show The Deadliest Catch, nods off into a deep, necessary sleep. Surely many audience members will feel their own eyelids getting heavy as the man falls into a nap. The effect is both mildly humorous after the exhausting experience of the movie and perfectly in step with the film’s redefinition of cinematic identification.

At times, the film has more in common with an amusement park ride than with a conventional observational documentary. If one surrenders to it, Leviathan is downright fun. It all culminates in a truly surreal, perspective-altering finale that raises the bar one last time, before the film almost disintegrates onscreen.

What Leviathan leaves in its own wake is a nonfiction film culture now utterly changed, much how viewers might have felt watching the Free Cinema experiments of the mid-1950s or the vérité masterpieces of the Maysles/Pennebaker/Wiseman era. Documentary filmmakers must now answer to Leviathan’s new combination of direct cinema, experimental ethnography and abstraction. The game is over. Let’s restart.