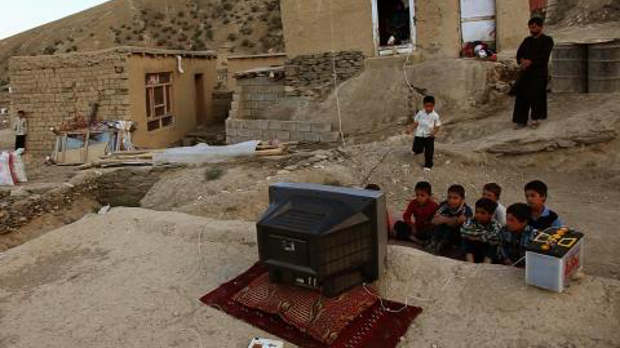 When President Obama announced in the State of the Union that the war in Afghanistan would effectively end by 2014, the news was greeted with little more than a collective shrug. That thing was still going on? But what is very far away for most Americans is very close for all Afghans, a fact made clear in the SXSW-premiering documentary, The Network. The feature directorial debut of the Academy Award-winning producer Eva Orner, The Network tells the story of TOLO TV, Afghanistan’s first independent television network. Granted complete access by Saad Mohseni, the founder of the network (dubbed the “Rupert Murdoch” of Afghanistan by The New Yorker), Orner’s film follows a group people trying to rebuild their country, one program at a time. Their struggle to live an everyday life in a country on the brink of disaster is as inspiring as it is heartbreaking, a harrowing reminder that every war has a cost even if you’re not the one who has to pay it. The film has its first screening at SXSW tomorrow.

Filmmaker: Talk about the development of this project. How did you first become interested in Saad and Tolo TV?

Orner: I had read about Saad Mohseni and seen him on television. I knew about what he was doing but not in great detail, and then a friend said, “Take a look, there might be a documentary.” The minute I did a proper Google about Saad, I knew my friend was right – there was definitely something worth looking into there, something different. I had watched so many things about Afghanistan over the years, and there had been so much done on the war and the military, but so little done about Afghans and the people in the country who were living there and getting on with life. I just thought here is a wonderful story about something positive in a place shrouded in negativity. What I discovered is that it is difficult to do something positive because the story of what is happening there is complicated and while gains have been made, the future is very unclear . So while there are parts of the film that are uplifting, there are parts that are murky because they are murky in real life.

Filmmaker: How long were you in Afghanistan? Did you have any safety issues while you were there and how did you approach them?

Orner: I raised a small amount of development money and went there for a month alone to do some preliminary research. I shot a teaser in February 2011, and then I used the teaser to raise the budget, and then I went back for two months. It’s difficult to shoot in Afghanistan. It’s dangerous. Nothing is terribly easy. Insurance is insanely expensive. I shot with a very slim crew — me and my d.p., Abazar Khayami, who speaks Farsi and had worked in Kabul. Saad was kind enough to let us use his security people and drivers and that was very, very helpful. But on many occasions, we didn’t have security. We just got around in local taxis. Expats who work for NGOs there don’t have that freedom — they have serious security. It’s a dangerous place. As a woman, it’s a pretty shocking place to be. I’m not a correspondent. I don’t hang in war zones, so it was initially difficult for me, not being able to simply walk down a street. I also was very aware that I didn’t want to put my d.p. at risk. We had one situation where we had been filming at Ashura, a Shia holy day where people take to the streets en masse. We had been there filming for two hours and as we left, we heard an explosion. It was a suicide bomb — 80 people were killed. It was a brutal day for us. It’s definitely not like shooting anywhere else.

Filmmaker: The film features a wide variety of characters. At what point in the casting or interviewing process do you know a subject is good on camera?

Orner: I knew Saad was going to be a key character since he started and owned the TV station with his siblings. And he is extremely charismatic. We spent a lot of time hanging out at the TV station talking to people, and you just meet people and you know when they have a story. I knew I wanted a wide variety of people and to definitely focus on women because women hadn’t worked in Afghanistan for many years. I think the women in the film are very powerful. One of the slightly unusual aspects was that we didn’t have a translator so when I was working with the characters that only spoke Dari, I would speak with them through my d.p. Rather than stop and translate, he would look at me and indicate with his eyes or with a few key words what they were saying. So I really shot some of the interviews blindly, but it worked. I did one thing where I invited a group of women who worked at the TV station to a lunch at someone’s house, and I just threw out questions to them about what it was like to be working women in Afghanistan. We just shot the lunch, and I had no idea what they were saying, but I just let them talk, and then I sent the drive back to America and read the transcripts when I got back. It’s an unusual way to make a film, but I don’t feel like I missed anything.

Filmmaker: It’s incredibly hard to make people care about Afghanistan, especially now that there’s been a draw down in troops. Did you think about that while putting the film together?

Orner: That’s always been the challenge with this film, and I think the way I’ve approached it is the Afghan film not about the military, but about the Afghans. People who see it tend to come away from it with a slightly altered opinion about what is going on and how they feel about it than they went in with. I’m all for bringing the troops home. I’m not sure our occupation has been terribly well handled, but I don’t think you can go into a country, spend half a trillion dollars, promise them the world and then leave without delivering. I think we have behaved irresponsibly and recklessly on many levels. I think small gains have been made, and I think if they deteriorate over the next few years, which I think they will, I think it will be a tragedy. There are so many smart, amazing Afghans who have been through so much and just want a chance, and I wanted to present that in the film.

Filmmaker: Your credits as a producer are really very extensive. How easy or difficult was it to transition from producer to director?

Orner: I’ve been producing for over 20 years. I never really thought about directing. When this project came up, I remember thinking someone should make a film about this, and I paused and thought I should. I don’t know where it came from, but it felt right. I produced, directed, raised the finance. It was a very handmade film. I loved it.  It was an incredible experience and life changing for me. It was the best time I’ve had making films over the past 20 years. I just returned from Beirut where I started shooting my next film, which I am also directing and producing. I’ve been approached about directing other projects, which is really exciting. I’ll continue producing for other people as I really enjoy that, but if there’s a subject that’s really meaningful, I’d like to continue directing.