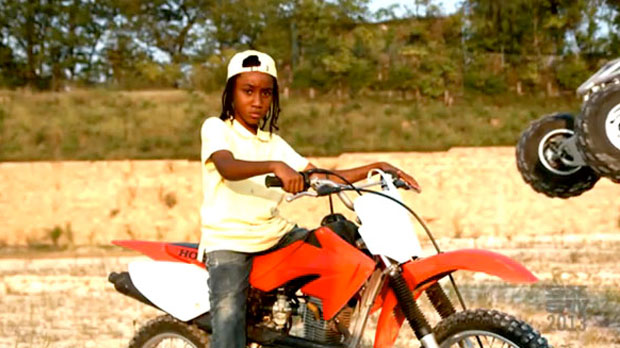 Sometimes a story is too compelling not to tell, and that certainly was the case when first-time filmmaker Lotfy Nathan came across the 12 O’Clock Boys — a dirt bike street gang which terrorizes the police, who are forbidden to chase them — while a student in Baltimore. Immersing himself in the world of the riders, Nathan found a protagonist for his documentary in the precocious Pug, a 13-year-old self-professed “man” whose dearest dream is to become a member of the gang. Part coming-of-age movie, part gripping, real-life action film, Nathan’s debut — which went through the IFP Documentary Labs in 2011 — has its world premiere at SXSW tomorrow. Prior to that screening, Nathan spoke to Filmmaker about the experiences and challenges of making 12 O’Clock Boys.

Filmmaker: How did you first come into contact with the world and characters depicted in the film?

Nathan: I was attending college in Baltimore and would see the dirt bike pack zoom by once in a while. Neither I nor anyone else in the protected bubble I was living in knew what they were about. I asked around and found that they congregated at Druid Hill Park on Sundays. I went there not knowing what to expect, but found that the riders were very receptive. I made some friends and went from there. Within about a year I was able to get in position to capture some very dynamic action coverage of the riders, thanks to a faction of the group called the WOWBOYZ. In 2010 I met Pug and knew immediately that there was something very telling in his character, a young boy on the cusp of joining the group.

Filmmaker: Was it difficult for you to gain access and win the trust of the people you were filming?

Nathan: There are different levels of trust, of course. It was easy enough to go and film the pack on the periphery, though I think it took the whole length of time that I filmed for the riders to see what I was trying to do as a whole. I was lucky to have met WowBoyz_StevenHonda early on. He was the one that really brought me into the mix and vouched for me. I think the best way to “win trust” is to just be there and stick around. You become part of the scenery.

As for Pug and his family, they let me in right away. Coco, Pug’s mother, was full of hospitality. She’s a great cook and she’s got her heart on her sleeve. They’re all so colorful. Again, by being there and sticking around I think that is the best way to have access.

Filmmaker: What were your aesthetic goals making this film? Did you have any particular touchstones?

Nathan: At first I wanted to make an action movie. I was getting material that was very animated and exciting. The criminality, the high speed, this is what people seem to register first in seeing the material. It’s sensational. At the same time, Pug amidst his family is what makes it and gives it heart. He’s the point of entry for an audience. I believe, too, that Pug’s example could explain “why” the group exists. Some films I was into while making this one: Akira, The 400 Blows, My Life as a Dog, The Bicycle Thief, Paris is Burning, 80 blocks from Tiffany’s.

Filmmaker: Is there a moment that stands out, for either good or bad reasons, from your time making the film?

Nathan: A great moment was finally seeing the original “12 O’Clock Boyz” VHS street tape. I had heard about it for years, and seen the actual physical tape itself at people’s houses on a few occasions still in its wrapping. It was only very recently that Superman, one of the founders of the pack, entrusted me a rare copy of the tape to me to include in the film.

Filmmaker: What was the most significant thing you learned while making this film?

Nathan: “Tomorrow is a day not promised. You could die any minute” – Pug