This Is Different: Cristian Mungiu on Beyond the Hills 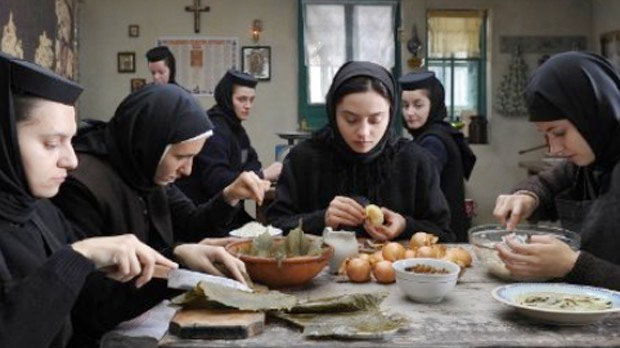 by Zachary Wigon
in Directors, Interviews
on Mar 7, 2013

Actors, Beyond the Hills, Cristian Mungiu

Cristian Mungiu’s latest feature, Beyond the Hills, confirms suspicions that were aroused by his previous, the Palme d’Or-winning 4 Months, 3 Weeks and 2 Days. What’s been confirmed is that Mungiu is that rare blend of filmmaker who seems destined to produce first-class auteurist art cinema. Mungiu blends two distinct types of filmmaking into one carefully distilled whole: his films address critically pressing social issues that are irrefutably relevant, but they also are formalist aesthetic works that are very much about the nature of cinema itself. There are plenty of serious filmmakers who tackle either one interest or the other, but finding a filmmaker who simultaneously tackles both fields of inquiry with equal intelligence and style is rare.

Mungiu’s talent is on display in Beyond the Hills, which premiered at Cannes 2012. Inspired by a true event, the film centers on the relationship between two young women: Voichita (Cosmina Stratan), a nun in training at a monastery in rural Romania, and Alina (Cristina Flutur), a childhood friend who comes to visit. Problems arise when Alina fails to convince Voichita to leave the monastery and return to Germany with her; after Voichita’s refusal, Alina decides to stay at the monastery, and as she becomes increasingly depressed, the priest (Valeriu Andriuta) comes to believe that Alina may be possessed by a demon, and decides he must carry out an exorcism. In excruciating detail, the audience becomes witness to how all the parts of society that are meant to help Alina instead fail her miserably. Part clear-eyed inquiry into the nature of faith, wholly critical take on the callousness of ostensibly helpful social institutions (hospitals are particularly excoriated), Beyond the Hills plays as an exploration of why religion is so necessary to so many, even as orthodox religion is portrayed as deeply myopic. Managing to juggle many narrative levels at once – the personal, the social, the spiritual – the film erects an impressive structural investigation into contemporary Romanian society. I sat down with Mungiu in New York to discuss Beyond the Hills. 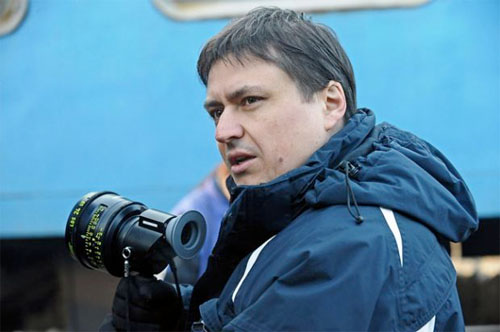 Filmmaker: Is there a place for religion within a non-fundamentalist state? Can religion really exist in a state that does not view religious law as the law of the land? Because I partially read the film as an exploration of how feeble religion’s view of the world is when there’s a state whose authority supersedes it.

Mungiu: What I like about the film is that it gives you the ability to speak about more general issues, like for example, how affective can religion be in a state like ours, where people claim to be very religious. 80 to 90 percent of Romanians declare themselves to be religious. Starting from there and seeing the story, you wonder, how can this happen in a place where people claim to be caring for the other? For me, the essence of religion are the Christian values of being good, caring for the other, trying to sin as little as possible, being open and forgiving. I don’t see this happening at all in Romania. I see a lot of hatred and indifference. The only thing people get from religion are the habits. Everyone knows all the rituals by heart, how to do this, how to do that, but the essence of what they should get from religion is not there. Normally, in a state that is poor, coming out of a situation where religion was merely tolerated – this should have preserved some very human values in people, values that were under attack by propaganda in communist times. But we are still in a society that is completely divided, where people are completely indifferent to the dramas happening close to them. So you wonder, what help did they get from religion? So this is not in the film, but the hope is that the film would open this discussion, and hopefully generate a debate about the understanding of religion in society.

Filmmaker: Two remarks struck me in the film – the priest’s homophobic remark, and the head nun’s misogynistic remark. In the US, there’s a significant number of people who are both deeply religious and also deeply prejudiced against minorities and women. It’s always puzzled me, because as you said, one of the fundamental tenets of Christianity is unconditional love. So I wonder, is there a kind of person who needs religion, and therefore gravitates to it, regardless of the tenets of the religion itself?

Mungiu: I hope the film is a place for tolerance, for the need to understand the other, to not rush to judge the other. We live in a society today where people tend to judge without having the patience to understand the other. It’s puzzling to me too – I don’t have an answer as to why people who should be tolerant aren’t. It means there’s a problem with religion. I’m speaking about the orthodox religion, which is specific because they never try to expand, to spread it – they are very happy with the people in the religion. They always believe that they represent the right choice, they are closest to the essence of Christianity.

Filmmaker: As you said, there’s a lot of indifference exhibited toward Alina in the film from the social organizations that you would expect to care about her. Ironically, the church is the one organization that does seem to care.

Mungiu: I don’t see it as an irony. All the inspiration for the film comes from reality. It’s so difficult to say who was guilty in the situation – they were the only people who tried to help, yet they tried to help in their own way. They reacted at the last possible moment, after no one did anything. I don’t think they’re any more to blame than the people who didn’t do anything for her, the representatives of the rational world, like the doctors and nurses, who confused these religious people by offering rational advice mixed with irrational advice, encouraging them to think that they could make decisions, because the nurses themselves thought she was possessed – they had little education. It’s all very relative – the film speaks about how relative good and evil can be. Not doing something for someone in need is already a choice – if you didn’t do anything for someone in need, you can’t claim you’re not responsible.

Filmmaker: I think it’s interesting, though, the certainty with which the church believes that they are doing the right thing for Alina. It reminds me of this Wittgenstein quote – “Where doubt is lacking, knowledge too is lacking.” Do you feel that the lack of doubt in orthodoxy prevented the church from being able to see reality?

Mungiu: I think that all things need to be questioned, and this is not the position of the church. They have the belief that if you start questioning things and having doubts about things, they will end up losing some people. So they are firm in saying, these are how things are, you shouldn’t doubt. It prevents them from evolving. You need to have the freedom to doubt whatever and to check your values. This goes with the right of having a good education – if you have the freedom to decide things, but you don’t have a good education, freedom is not very useful. I was talking with the actresses about Voichita – is Voichita losing faith? No, she’s getting doubts. For a believer, this is very painful – when you’ve lost something, you’re at least clear in your mind. But when you have doubts – for someone who is religious, that’s a great sin. To doubt the values that are directing and giving sense to your life? This is why she’s the main character. Ultimately, responsibility belongs to the individual, as does guilt. So you can be told to just believe what you’re told to believe, but you cannot shut out personal responsibility. This is why I think the film deals with free will.

Filmmaker: Could you tell me a bit about how you prepared the actresses for the film, psychologically? Do you engage them on a psychological level?

Mungiu: I tried to give them as little as possible, only the basic information they needed. I encouraged them to relate to the situation, to make sure they understand the situation and find something similar in their real life so they can understand it psychologically. But I think it pollutes their performance if you start speaking about the biography of the character and so on. They will start to conceptualize what they do, and they will stop being simple and emotional and direct. For me, the important thing is that the actors deliver the situation in a believable way. But I don’t work the same with all actors. Some people need very little indication – just general framework, an attitude. Other people need words, biographies – but words are very imprecise. You say one thing, you think it’s plain and clear, but things don’t travel like this. So I actually act a lot for them – I give them the intensity, the expression, the emotion, everything I’m trying to place, and then they’ll have a better model. But it ultimately comes from them.

Filmmaker: So the reason you don’t give more of a background or psychology is because you’re worried the words will fail you.

Filmmaker: Obviously, you’re able to make art films in a very exciting way – the shoot for this film was 55 days. In the US, it would have been made in around 20, which would maybe be impossible.

Mungiu: Yes. This freedom comes from the way we finance films in Europe, we see cinema as an art that needs to exist beyond any commercial expectations. At the same time, we take great risks making films this way. We’re challenging the spectators, saying, “Look, this is my extreme way of thinking about what cinema is and what it should be. If you like it, great.” We don’t have any commercial pressure. There’s a respect for the artist, but for the audience as well – I don’t think the audience has to be given what it expects. That is disrespectful, I think. People don’t expect much. It’s up to you, as an artist, to broaden their horizon and say look, cinema was not invented to illustrate stories that were written with words. You don’t need cinema for that. I do see some interesting things coming from the US, but interesting in a different way – I don’t see too many films of long takes without music, films where the director is abstaining from the tools normally used to seduce the audience. This is the great boldness that we are having. I don’t want to be liked by using the small tricks that I can use. Getting an editing rhythm, using nice soft music, so you get an emotion, but you get it from the music – no! We need to get emotions, but working in a sober way.

Filmmaker: I interviewed Michael Haneke a while ago, about The White Ribbon, and I asked him about why he abstains from music, and he said, “It’s too easy.”

Mungiu: Yes, it’s not fair. It’s not specific to cinema. As a filmmaker, you have so many ways of manipulating your audience. This is why we want to have everything in just one shot – there’s a strength that comes with this. It’s so easy to get the rhythm with fast editing. Try to have the rhythm only with the actors, with the emotion itself. This is difficult. People won’t notice at the end how the film was made, but its directness and honesty travels. They feel that this is different.