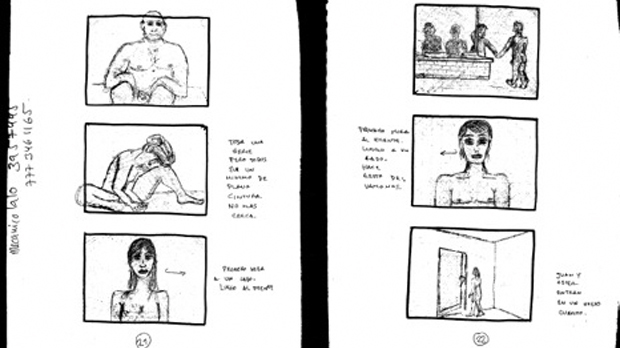 by Filmmaker Staff
in Filmmaking, Screenwriting
on May 1, 2013

Courtesy of writer/director Carlos Reygadas, below are the script and storyboards from two sequences from Post Tenebras Lux, which opens at Film Forum today. The first sequence is the sauna scene, in which the film’s two central characters, played by Adolfo Jiménez Castro and Nathalia Acevedo, visit a swingers sauna in France, and the second is the closing sequence of the film.

Camera hand held and on tripod.

To be determined whether real steam or fake smoke.

1. Series of fixed shots of naked people in a steam bath with red light. Each alone. In full shot.

From the beginning screams and groans somewhat muffled by the noise of steam.

There are a couple of women among all.

2. Fixed wide shot. A wall with a mirror and toilets covers half the picture. From behind come  the noises and groans that we heard. A guy comes from one side of the wall and invites the others to come. He says that they need “two men”. Leave Esther’s side and then see Juan and Esther reflected in the mirror.

3. Waist level shot of Esther. With towel. Looks to the side. Probably at Juan. Then to the front where the noise increases.

4. Waist level shot of Juan. Looks straight ahead. Then to a side. Probably at Esther. Juan makes gesture to leave from there.

5. Wide shot. Juan and Esther walk down a corridor or hall and then enter another room.

6. Seven people in a fixed shot. One of them is an Arab 40 years old staring close to the camera. The two others are a couple doing their thing. There are two other women. And there are a few older men.

7. Full body shot. Juan and Esther look at the others staring.

Juan says something to ester. Juan stands behind her and takes the towel. A man on the sideline of the act enters the frame.  The man takes Esther out of the frame, and Juan, without moving, observes the situation.

9. Medium shot. Men are around Esther. One of them penetrates her. She is lying on her back on the table. The others fondle her impatiently.

Then the older woman from the couple enters the shot. She holds Esther’s head and caresses it. In French she tells her to relax, to enjoy.

10. C.u. of the woman looking at Esther with great tenderness.

11. C.u. of Esther looking at the woman. Everything is mixed in her. She cries, but looks with the amorous fragility of children. Soon she is full of sexual pleasure. And as though fainting, between steam, sweat and tears, arriving at orgasm. 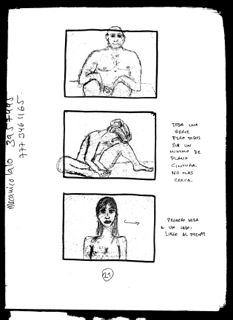 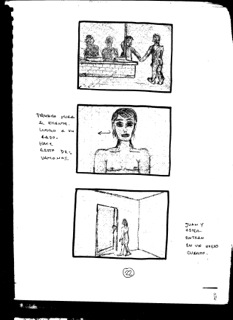 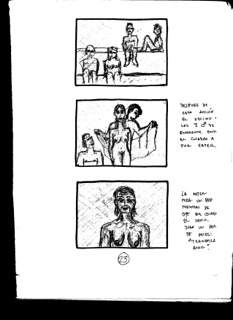 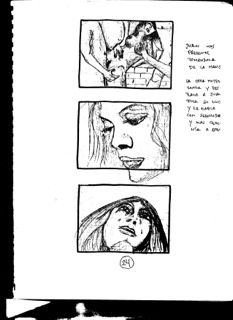 1. Shoulder. Traveling from a football field 3/4 forward over the mountains.

4. Same traveling. Profile shot. Focused on his hand as he walks.

5. Same axis. Same traveling shot. With and without jumping axis. We shoot both of these. We focus on his ear as he walks.

6. Same traveling shot. Focused on his pelvis as he walks on. Above limit: navel. Down: mid-thigh.

7. Panorama. The football field from above. Symmetrical. Seven standing near the center.

Off screen, another tree falls

Look at other places just to the side from above

10. His p.v. Again. Another angle. Another tree falls and another. And then one more.

In a medium shot it starts to rain.

11. Wide shot full body. Siete in the middle of the field seen from behind but not 100%. Siete puts his hands to his head and yanks firmly pulling it off and in doing this falls. Blood flowing from the body and head. Soon a huge pool of blood forms around them.

Still raining. Getting stronger. And what it rains, now we see well, is blood.

12. Shot of a goal. Underneath puddles that grow because it does not stop raining.

13. Full shot of cows grazing in the rain. They are soaked by the blood that does not stop falling.

Rugby in England. Teens playing with fear and determination. In peace, not out of ecstasy. 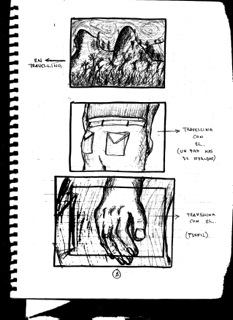 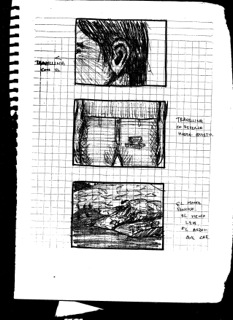 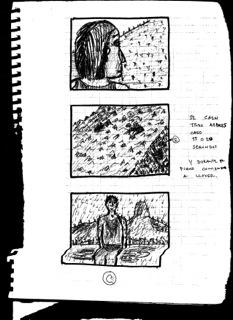 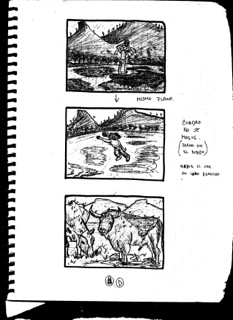 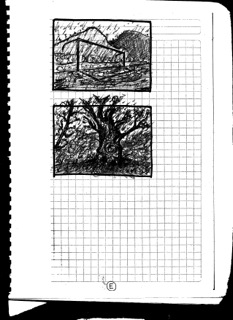