Production Design on a Budget 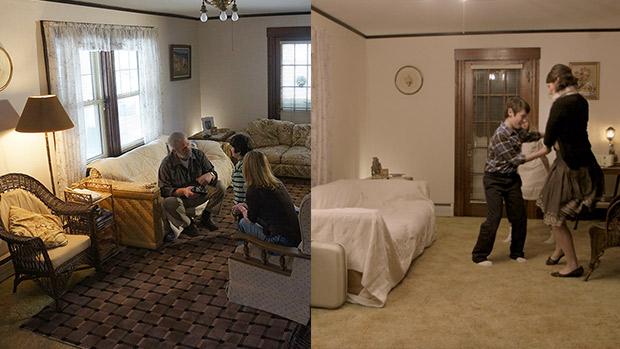 by Michael Murie
in Filmmaking, Interviews, Production
on Mar 18, 2013

On small budget productions, coming up with locations can be a challenge – especially if you need something a bit unusual. An upcoming music video for the band Run 8 Rider required that a single location represent three different time periods to tell its story. Using a borrowed house as the location, director Sean Meehan turned to production designer Riley Fearon to supervise the transformation of the location. In this interview Riley talks about the challenges of working on a small budget, how he approaches production design, and how he came to the field.

Filmmaker: For this project what have you been doing?
Fearon: As production designer I’ve been given this location and we need to do three different decades; the ’60s, the ’80s and present day. I found the props that we needed that fit the decades, and changed the layout of the room and the walls as much as possible and came up with those decades, with the budget that we had.

Filmmaker: What was the budget?
Fearon: The budget was very small. It was a $300 budget and we actually came under budget, which was good. I used a lot of family stuff from the attic and the basement of the family.

Filmmaker: What were the major things that you did?
Fearon: For modern day, I guess the biggest one is the carpet we added. It definitely changed the whole mood of the room; we went from a yellow carpet to this nice brown-checkered pattern carpet that gives a different feel from the ’80s to the present day. Even the TVs were great. You get the flat screen for the modern day and then in the ’80s we have the wood-paneled TV. 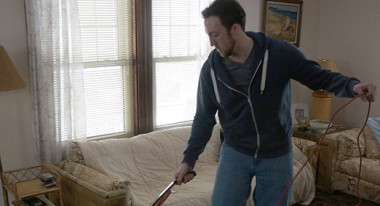 On a budget the Production Designer does everything!

Filmmaker: And that was here?
Fearon: I actually went out and found that. Craigslist is a wonderful thing.

Filmmaker: How do you approach your production design projects at the start?
Fearon: For the ’60s I found a bunch of Time and Life Magazines, which were great in helping me design for that era. I usually do that with my projects, I take an old magazine from that time and just page through it and look at the whole style of everything. You can find those things on YouTube and places like that, but I think when you’re holding something that’s from that decade, if it’s physical, you look at it and you go over it and you almost feel as if you’re a part of that when you’re reading it. That’s how I usually do my production work if I’m doing a different decade; look at the magazines and understand what objects were in that time and the styles and everything like that.

Filmmaker: How did you get in to production design?
Fearon: I went to school at Full Sail University in Orlando, Florida, and they have a whole production design course along with art direction. It wasn’t something that I initially thought I was going to do; it was one of those things where the class came along and no one really knew construction. My grandfather was a contractor so I grew up with that a little bit. So I stepped up to the plate and designed sets, and I eventually came to love it, really. I think it’s one of the most important things in a film, especially when doing different decades. You need objects and room tones to really change the viewer’s perspective of what time period it is.