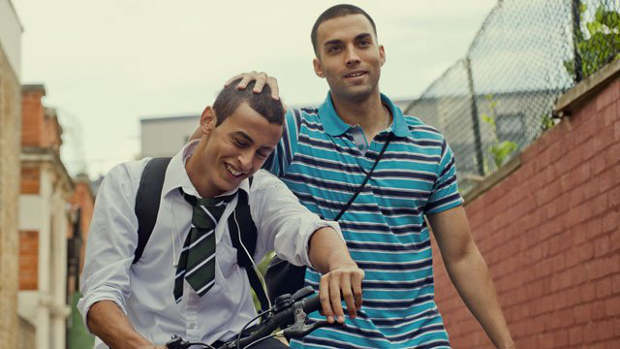 My Brother the Devil

Sally El Hossaini’s My Brother the Devil finally arrives in U.S. theaters on the back of a celebrated festival run that started at Sundance 14 months ago, and continued throughout 2012, as the film picked up prizes not only in Park City but at the Berlin and London Film Festivals and also the British Independent Film Awards. This debut feature from Welsh-Egyptian writer/director El Hosaini, a former documentarian who’s been working in film for many years, is set in the East London neighborhood of Hackney and concerns the relationship between two first generation British Egyptian brothers, gang member Rashid (James Floyd) and the younger, more impressionable Mo (Fady Elsayed), teenagers both trying to find their place in the world. Smart and sensitive, My Brother the Devil diverges from the clichéd (or should that be hackneyed?) path most coming-of-age movies take, choosing instead to ask more profound questions about its characters than simply whether or not they will have short, wasted lives as gang members. The film is released today by Paladin.

Filmmaker: Given the wide breadth of experiences you’ve had in your life, why was it this story that you chose for your first feature as director?

El Hosaini: I’ve lived on the same council estate (government subsidised housing) in Hackney, London, for over 10 years. I wanted to make a film about the place I call home. We shot the movie about 10 minutes from where I live. Initially I set out to tell a story about brotherhood and to dissect a sibling relationship. As I was writing the script I had an image of a piece of DNA in my head. Each brother was a strand of the helix and their lives twisted and spiralled around each other; on separate paths, but forever connected. That’s the heart and spine of the movie.

I’m half Egyptian and so drew upon my heritage in making the brothers in the film British Egyptians. I started writing the script shortly after the 7/7 London tube bombings and I was seeing a lot in the media about British Muslim youth being terror threats. I wanted to make the anti-terrorist film. A film that explored the real dangers and concerns of these youths’ lives. I wanted to give an honest and three-dimensional depiction of them in cinema. I focus upon brothers of Arab descent but their friends are originally Nigerian, Somali, Turkish, Jamaican, White and mixed race… This racially mixed, youth subculture fascinates me because this is real London! These are British boys. The truth is that they wouldn’t last five minutes in the Middle East. They have an ambivalent relationship to Arab culture that’s both familiar and alien to them. Their concerns are the universal concerns of all teenagers.

The film took six years to make. When researching and developing the script I fell back on my documentary roots. I embedded myself within gangs in Hackney, Highbury and Brixton. I learned the language. What I discovered is that there’s a young disenfranchised generation emerging, but it’s much more intelligent, thinking, and feeling than most people or the media give it credit for. It was during this research phase that I contemplated the concept of masculinity. I was surrounded by a certain testosterone fuelled machismo and saw how much pressure these boys put on themselves “to be men.” Why is it that we are more comfortable seeing two of these young men holding guns than holding hands? I constructed a plot that explores this. Issues of identity have always interested me due to my own culturally mixed upbringing. Like the brothers in my movie, I know how it feels to have opposed belongings and to live in two worlds that aren’t always in harmony.

No filmmaker wants to make a film they’ve seen before. The rebel in me drove me to be playful with clichés and subvert the audiences expectations of these kinds of people and this kind of film.

Filmmaker: Did you ever consider telling this story more from a female perspective? (Would that have made it a harder sell?)

El Hosaini: No. Just because I’m a woman doesn’t mean I only want to make films about women. In any case I’ve always been a bit of a tomboy. I really didn’t think about the fact that I was a woman making a film about men until after I had made the movie and was asked questions by journalists about being a “female director.” I look forward to a day when we can drop the adjective. When I can just be a filmmaker instead of a female filmmaker. In a way, this film is from a female perspective… I’m a woman.

Filmmaker: In what way did My Brother the Devil benefit from going through the Sundance Labs?

El Hosaini: The Sundance Labs were an incredible experience for me and an integral part of the development of the project. It was like summer camp for film lovers. I take my hat off to Robert Redford and Michelle Satter for creating and preserving such a supportive and nurturing space for artists. A place in the mountains of Utah, far away from the pressures of “the industry,” where you are encouraged to dig deep within yourself and find the heart of the story you are trying to tell. I feel extremely lucky to have been associated with the institute and the work I did on the labs definitely improved my script.

Filmmaker: What lessons did you learn working on films like Green Zone and other mainstream movies that have helped you in your own work?

El Hosaini: I was a production coordinator on low-budget independent films for a few years. Being in the production office means you are one of the first and last people on the job. From this vantage point I was able to learn about the entire A to Z of filmmaking. However working on lower budget films also meant that I saw a lot of exploitation with crew members going unpaid, etc… This is something I vowed never to do. My Brother The Devil was a low-budget film but everybody got paid fairly and we never went into overtime. People have families they need to go home to.

Working on Green Zone was a different experience entirely because it was a huge multi-million dollar production. I was on set and 3rd AD’ed a bit. When you are exposed to this scale of working you realise why there are lines of command. You take your orders from above and dole out orders to those below. Its not unlike being in the army. If you don’t maintain the discipline and do your job like clockwork then the whole system collapses. In this sense it teaches you that filmmaking is the opposite of ego or imposing an ego on something. You are only as strong as the weakest link. As a director working at this level you have to be clear, concise and in control. It’s the only way to lead such a large army into battle.

Filmmaker: What future projects are you working on at the moment?

El Hosaini: I’m working on two projects. One is another London-set movie that’s in a world I’ve never seen in cinema before. Completely different to My Brother The Devil. The other is a bigger American story that’s based on a historical event from the 70s. What excites me about both of them is that they are breaking new ground. They are also, however, intimate studies of character. I suppose that’s my default setting!