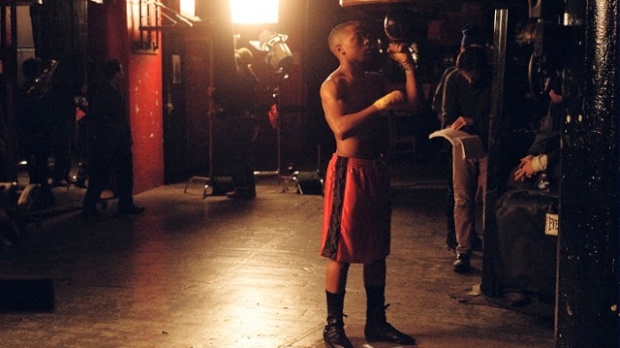 When people ask me what I’m working on these days, and I tell them “a boxing movie,” most of the time I get an eye roll. Who wants to see another boxing movie? Boxing, a dinosaur of a sport that’s been bludgeoned to death by the movies already. Wasn’t The Fighter enough? Couldn’t you at least make it MMA modern? Does a movie camera need to ever enter the boxing ring again? After Raging Bull and Rocky and Million Dollar Baby and Fat City and Somebody Up There Likes Me?

Boxing has always drawn dumb, confused macho guys like myself. It’s cool, it’s tough, it’s naked, it’s true. And so you hear about different artists who have actually gotten into the ring over the years—they’re usually guys who have issues with their sensitivity. That is to say—they’re guys who are very feminine and need to be constantly furbishing that super male part of themselves. Bob Dylan and Miles Davis have both boxed a lot. And both made music about it. Mickey Rourke took his pretty boy looks into the professional ring, came back with a broken wax mask. I understand Tarantino boxes, tough guy he is.

But the thing about boxing, as Norman Mailer pointed out, is that it’s just as sensitive as it is murderous. If you go to a boxing gym, and Floyd Mayweather’s not there, it is a remarkably quiet and tender place. It’s a place for boys with no fathers to be raised by men. It’s a place for women to go to find out how to protect themselves and fight back. It’s a place to learn about life, about breathing, about death. There is the fear of getting hurt and the fear of hurting others. Anyone who’s ever been in love knows about boxing.

See how boxing just drags this drivel out? All of a sudden I’m talking about love. But that’s the thing about it, boxing. It’s a beautiful blank canvas to project away on. Joyce Carol Oates is obsessed with boxing. Here’s what she has to say about it:

The further we get from metaphor and symbolism, the further we get from understanding ourselves. And the multitudes inside of us. That we are not defined by society. That we are not reality TV versions of ourselves. That we are not the harsh magazine version of ourselves used against us to sell us products we don’t need and never will. That we are not just an age, or sex, or color, or height, or weight. Judd Apatow can make as many self-reflective movies as he likes about being white and rich and turning 40, but without the understanding that he is simultaneously none of those things, his movies are not reflective of anything other than a dead artist. Imagine if Shakespeare only wrote about his actual day to day life. If he hadn’t understood that he was a suicidal prince, and a Capulet love sick woman, and a sinister Moor-hating schemer, and a boastful, corpulent cowardly knight. Imagine if Shakespeare had no imagination. And left us with just a bunch of plays about being an English playwright. Episode three: William goes and gets his ear pierced, then, in pain, argues prices with the local ink seller, then goes to bed.
Anyways, sometimes I roll my eyes too when I realize I’m making a boxing movie. What a silly, adolescent guy thing to be attracted to. The sweet science, as some have called boxing, is a dying art, don’t cha know. Maybe that’s why it’s worth it.