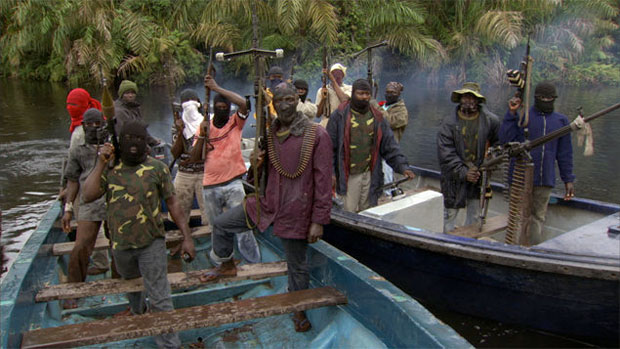 by Mary Anderson Casavant
in Directors, Interviews
on Apr 18, 2013

Oil. We can’t live with it. We can’t live without it. For some, this is the major environmental predicament of our times.  For a few countries in Africa, it’s an unexpected windfall, the consequences of which are still not entirely known. While researching what was to become her second feature Big Men, Rachel Boynton traveled to Nigeria to find out what exactly was going on in the oil fields there, only to discover that the story was much bigger than just one country or even one continent. It was a story that would take her to nearby Ghana all the way to Houston, Texas, and tonight to the Tribeca Film Festival, where lucky New Yorkers can check it out.

Filmmaker: How did you first get interested in the subject of oil companies in Africa? Were you looking for a story in Africa or were you following the oil?

Boynton: Well, I first started working on the film in 2006, and at the time, oil was everywhere in the news. Oil prices were skyrocketing. You couldn’t turn on the television and not see a story about how oil prices were crazily expensive. At the time, I hadn’t seen any documentaries about oil that hadn’t looked at the premise without having some sort of political idea at the center, and I was very interested in doing something about what I think is basically the most important resource on the planet that started with openness. I wanted to start by asking questions and go from there. That’s how I like to go about making films – starting from a place of openness and a place of knowing that I had something to learn. At the time there was this militancy going on in the Niger Delta where Nigerian groups were blowing up pipelines and demanding money, so it seemed to me like there would be a story there so I got a plane ticket and went.

Filmmaker: You followed this story for six years. How did you support the project over the long haul? Were you fundraising as you went along?

Boynton: Well, when I first went to Nigeria, I knew nobody in the oil business, and I knew nothing about the subject, so there wasn’t anyone anywhere who was going to give me money then when I knew nothing. The first trips to Nigeria where I was running over there and having drinks with oil workers and trying to find freedom fighters, those were all from me. I took the money from the previous sale of my film and invested it in the project. Once I had my foot in many doors and had a real proposal, I was able to go out fundraising for it. I got money from two sources: Impact Partners and Screen Pact Pictures. A project like this, you’re raising money as you go along, and you never have enough, and you’re always trying to do things as cheaply you can. I did all my sound and all my travel arrangement. Once I had a sample together, I was able to raise more money by showing people what I was talking about, and that was very helpful in getting support. I was very lucky to get support from a lot of places.

Filmmaker: I imagine that one of the biggest hurdles for making this film was access. How did you negotiate that with the oil companies?

Boynton: My basic philosophy is that people will trust you if you prove yourself to be trustworthy, and if you are sincere and sincerely interested and sincerely open, people will feel that and will trust you and tell you their stories. I took that attitude to the oil companies, and I was very open with them about what I wanted to do. I let people know I would never film them secretly. I told them that while they didn’t have any control over what I did as a filmmaker, that I would try and show them the final product before I showed it to the general public. That’s sort of the basic attitude that I came to the table with. The oil company I followed, Cosmos Energy, was five guys who were some of the first people to discover oil off the coast of Equatorial Guinea. I had heard about them, and the very first time I filmed was at the offshore technology conference where oil companies can go and show off what they’re doing technology wise. The event was about Nigeria, and a guy named Brian Maxstead, spoke at this event.  I ended up going and doing a Powerpoint presentation for them, and they said yes.

Filmmaker: At what point in the filming process did you choose to follow multiple storylines across the globe?

Boynton: With this kind of film, a vérité film, the effort is all about trying to be in the room when things were happening, which is a very different effort than trying to interview someone about something that has already occurred. Once I knew I was going to be filming in Ghana, the one question everyone wants to know the answer to is whether this drilling is going to be good for the country of Ghana. To answer that question, I would have to film for 15 years, so I knew I was going to have to figure out a way to answer that question without having to be around that long, and so one of the things the Nigerian section is looking at is looking at the question of who gets what. There’s a whole American aspect to this film to0. It’s a very international business that connects everybody. It connects you and me and France and Saudi Arabia, so it makes sense to really film in all these different places.

Filmmaker: Were you editing as you went along? If not, at what point do you start thinking about how you are going to structure your story?

Boynton: I start thinking about how I’m going to edit the movie from the second I conceive it. As a director and producer, you have a very limited budget, so you have to constantly trying to think about how the story works. You are constantly trying to hedge  your bets and cover all the possibilities. There’s a main narrative story in this movie about the drama that unfolds in Ghana, and it’s a very dramatic story with a lot of twists and turns, but I didn’t know that it was going to be really good when I started. I actually shot a whole different story that didn’t end up being in the film with the US Navy off the coast of Ghana. If the Ghana story hadn’t been as compelling as it was, I would have needed to tell a much more macro story, and if I had to do that, I would have needed the global piece to pull it all together. My dream is always to work with an editor the whole time. What I really want as a filmmaker is to collaborate with an editor and to get to know the material with the editor so we can be on an even playing field as we make the movie. That very rarely happens because you usually don’t have the money. So you end up hiring an editor not when you’re done shooting, but when you’re almost done shooting so you can get the person to weigh in on what you still need. I’m always very open to having a dialogue with an editor while I’m shooting because it only makes the film better.