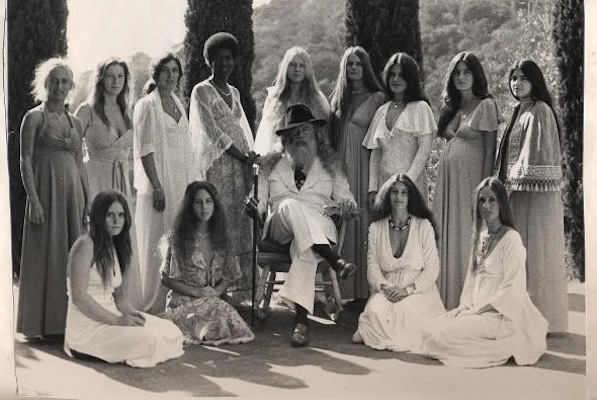 If you had an inside connection to a true-life tale in which sex, drugs, and rock & roll were part of the path to spiritual salvation for a ‘70s L.A. hippie cult group, wouldn’t you want to make a movie about it? Jodi Wille and Maria Demopoulos’s documentary, The Source Family, offers up an intimate history of the group led by Father Yod, A.K.A. Jim Baker. A successful, charismatic businessman, Baker had a late-1960s spiritual awakening leading to his establishment of a religious commune whose initial hub was his popular Sunset Strip health-food restaurant, The Source.

After adopting his newly enlightened identity, Father Yod became the guiding light of The Source Family, a haven for people seeking spiritual transcendence. The Family courted controversy in the ‘70s, espousing free love, mind-opening drug experimentation, polygamy, and other countercultural concepts, all while running the restaurant and recording a series of DIY psychedelic albums that would eventually become collector’s items. Supporters saw them as idyllic iconoclasts blazing their own trail, while detractors viewed them as something akin to the Manson family sans homicides. Wille and Demopoulos, both making their feature-film directorial debut with The Source Family, saw the journey of Father Yod and his followers as a story demanding to be told.

The Source Family makes its theatrical premiere on May 1 at The IFC Center in New York City.

Filmmaker: How did you first become aware of the Source Family?

Wille: I learned about them through their music when I came upon a deluxe box set of all their records, produced by the Japanese psych label Captain Trip in 1999. The music, album cover art, and photos of the family blew me away, and I was astonished they’d lived in L.A. in the ‘70s and I’d never heard of them. I’d been researching cults and obscure fringe religious groups for years.

Filmmaker: How did the idea to do the documentary first come about?

Wille: Years after I saw the box set, I found a student film with interviews with Source Family members and contacted them to see if they might be interested in doing a book with my publishing company, Process. Isis [Aquarian, Source Family archivist/alumnus] and her “brother” Electricity had just finished a book, and we decided to rework and expand it, so I went to Hawaii and started interviewing her, digging through her archives. My jaw dropped multiple times daily. I couldn’t believe how extraordinary and massive the archive was. I’ve worked with a number of amateur historians and their archives but I’d never seen anything this extensive and wild.

Through the process of reworking the book, we interviewed a number of other family members and Isis revealed that in her archives she had hours of family home movies and audio recordings, beside the hundreds of color and black & white slides. At that point I realized this would make an incredible documentary, and if I didn’t do it, someone else would. Not long after that, I brought Maria in — she’s a longtime friend and a talented commercial director — and then we started to film in earnest.

Filmmaker: What were some of your initial impressions as you went through the archives?

Demopoulos: I was awestruck and inspired by those archives. There was an intimacy and unselfconsciousness to the way they were recorded. The sheer volume was staggering, and we had to cut out big story points to keep it under a reasonable length. There were hundreds of hours of audio recordings, three to four hours of Super 8mm film, and close to a thousand still photographs. There were artifacts and ephemera like handmade books and clothing, scrapbook pages, drawings, newspaper clippings, menus, mug shots, autopsy reports and FBI reports. Even after we’d gone through what we thought was the entire archive, Isis would find unmarked boxes, which would sometimes consist of obsolete tape formats from the ’70s. One reel was off-gassing so badly that it burned my eyes every time I opened the box. We had to bake and destroy these tapes in order to retrieve their contents in the hopes of unearthing another gem. Needless to say, we were constantly surprised.

Filmmaker: How hard was it tracking down former Family members? How did they compare to what you expected?

Demopoulos: We didn’t have any trouble tracking down Family members because Isis gave us the keys to the kingdom. Honestly, I wasn’t walking in with expectations as much as curiosity and anticipation. Jodi had spent lots of time with the Family, so I had heard the stories. Overall, I was struck by the openness of the Family members. They each have a strong sense of self and credit the time they spent with Father Yod as the most meaningful and extraordinary of their lives.

Wille: I’d built up some level of respect and trust with Family members while interviewing them for the book with Isis. They saw from the book that the story was approached with integrity, so this helped a lot to gain their trust and openness. They were all very gracious and trusting, which was wonderful.

Filmmaker: Did you ever encounter differing accounts from different members about how things went down?

Demopoulos: Being a documentarian is a lot like being a detective because you’re simultaneously deconstructing and piecing together a history. Sometimes we’d finish an interview and I’d leave with my own personal biases. Then we’d interview another Family member who was present for the same event and their version would be radically different. My head would spin because my own prejudices and preconceptions were constantly being challenged. When stories are in conflict, you can often read between the lines and draw your own conclusions, but after a while, the accuracy of the events became irrelevant. What mattered more was how each individual processed the experience and how it informed their choices as to who they are today.

Filmmaker: You do a great job of keeping the documentary even-handed and presenting both the positive and the negative elements of the story.

Demopoulos: We always intended to keep the film balanced. We wanted to create a full-immersion experience, telling the story as much as possible from an insider’s point of view. While 140 people may have been present for the same experience, there’s a dynamic range as to how that experience gets interpreted, and we tried to honor each perspective, so the viewer could draw their own conclusions.

Filmmaker: What do you think the story of the Source Family says about the countercultural environment of that era?

Wille: The Source Family was one of hundreds of radical social experiments and spiritual and communal groups in the ’60s and ’70s, that, despite being high-risk and often messy situations, transformed the lives of hundreds of thousands of the participants in ways that still resonate with them today.

Filmmaker: What are the most resonant themes you feel the film contains?

Demopoulos: [Family member] Zinaru’s mushroom trip with Father Yod was a story that emerged from the book and was foundational for us thematically. On this epic trip, he discovers he’s at the end of his journey with Father Yod and that the student-teacher (or guru-devotee) relationship can only be taken so far and should be temporary. In his own words, “At the end of it all, we are our own teacher and we’re responsible for our own evolution.”