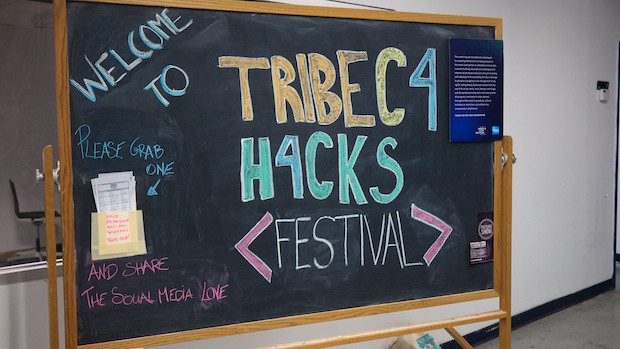 by Scott Macaulay
in Festivals & Events, Filmmaking, Transmedia
on May 7, 2013

Technology-centered hackathons identify real-world problems and then attempt to solve them through rapid prototyping. Artistic hackathons — 48-Hour Playwriting contests and the like — use compressed time periods to stave off creators’ perennial demons (procrastination, usually manifested by a compulsive desire to clean one’s apartment). But hackathons that merge the creative with the artistic pose unique challenges. There’s the artistic element, the technology element and then also the fusion of the two, which is actually a third thing entirely. Storytelling craft, choice of content but also appropriateness and originality of UI and methods of engagement all become the criteria by which projects are judged.

At Tribeca Hacks, an event that culminated on April 28, the final day of the Tribeca Film Festival, five teams of filmmakers and developers presented hastily-assembled projects that attempted to identify compelling content and then prototype new ways of presenting it. Not unexpectedly, there were intriguing ideas that I would like to see further developed, cool projects that required tech rethinks, and then some work that might be better re-imagined entirely.

Presenting first at the event, which took place at Chelsea’s new Eli Malinsky Center for Social Innovation, was Extreme Therapy, a comedic interactive short by directors Justin Enson and Aaron Moorhead, whose Resolution was a hit at last year’s Tribeca. The developers were Interlude’s Alon Benari and Tal Zubalsky, and the project was introduced as a “Choose Your Own Adventure”-type game. (Note to future hackathon attendees: do not use the children’s book series Choose Your Own Adventure, an influence on first-generation CD-ROM entertainment, as a comp.) The short film featured a couple trapped in some kind of office building purgatory. We all logged onto a website on our smart phones and voted on different story paths, making the actors do things like pick up a gun or put on a bra. The results were suitably wacky, but there wasn’t anything special about our act of choosing — no provocative dilemma that might have spurred debate and interaction among ourselves, and nothing compelling about the storytelling logic itself. This was underscored by the creators’ decision to play for us all of the various outcomes. I would have rather been left wondering if we had picked the most exciting one.

Terror Engine, by Jeff Crouse, a teacher at Kitchen Table Coder, and writer/director Aramique, is, essentially, a video art piece about the war on terror that mashes online news footage generated by real-time search queries into a “chaotic sensory overload.” The piece has personal and geo-locational elements as viewers can log-in using Facebook and reveal their locations, information that provides further direction to the search queries. The resulting video, which, as demoed, resembled a randomized Fox News bumper, can then be downloaded by the viewer. While the intent was to deconstruct the ideology behind the American media’s visual language of terror, the videos produced by Terror Engine that night seemed instead to be embodiments of the visual sensibility they were ostensibly critiquing.

Also concerning U.S. foreign policy was Hear Me, by Zach Lieberman and filmmakers Musa Syeed and Bassam Tariq (a 25 New Face with These Birds Walk). Introducing the project, Tariq began by saying that he was “pro drone” until he traveled to Pakistan and witnessed examples of the weapons’ collateral damage on civilian populations. In one town, he said, residents have fled their homes and now sleep outside on the trash in constant fear that their houses will be targets of a strike. Hear Me brings the auditory products of drone warfare, particularly conversations among affected villagers, to the smart phone, aiming to raise consciousness among Western listeners.

Hear Me has worthy goals, but I was slightly confused by the discussion of its content and interface. The way I understood it, a trip outside with the app installed would trigger on my headphones these conversations, which I’d then have to comprehend by reading the subtitles on my smartphone screen as I walk. What I thought would be more interesting, I told Tariq after the presentation, would be for the app to transform a listener’s acoustic space into the site of a drone attack, allowing a stroll to the deli to be inflected with the sounds of everyday life in Pakistan, Afghanistan or Yemen, the whistling of a drone, the explosion and the resulting chaos. On-screen information about the specific drone attack recreated and its casualties could supplement the sensory experience provided through the earphones. Tariq said he, Syeed and Lieberman had been discussing ways to bring more geo-locational specificity to Hear Me, and I’d love to see the next iteration of this piece.

Another 25 New Face was filmmaker and animator Julia Pott, part of the team behind Death Curse, the only real game in the group. Joining her on stage were collaborators Jono Brandel, Aki Rodik, Chris Delbuck, and Doug Fritz of the Google Data Arts Team. Death Curse is an interactive storytelling game that, said Pott, “uses tricks of the internet to evoke terror and fear in the viewer… to make you feel fearful in a comfortable space.”

Death Curse begins as a crudely animated Galaxy-type game but, after a few minutes of play, it morphs into something more sinister. “Do you want to play a real game,” a dark, vocoder-ized voice asks. Say yes and you’re cast into a urban hellscape drawn from your own environment. The game navigates you to the nearest graveyard, and when you are inevitably killed, a stamp is placed on a Google Map. Most intriguingly, you’re not able to replay the game so as to erase your gravestone and rejoin the ranks of the living.

In some ways, Death Curse, which recalled Jason Zada’s 2011 interactive horror piece, Take this Lollipop, was the most ambitious of the offerings in that a working prototype would require more than a weekend’s worth of coding and animation. What was demoed was quite rough but promising.

Hackathons are about finding new ways to solve real-world problems, I wrote earlier, and my favorite of the five projects, Past Perfect, was one that addressed a creative challenge I faced in the past. I once spent a couple of years developing an anthology film project based on a well-regarded book of short memoirs. The project was intended to be a feature comprised of ten or so of these short stories, and the struggle was to respect both the integrity of these real-life tales as well as the demands of the feature form. It was a challenge faced by the makers of any number of anthology films, and one that we never really cracked.

Using a similar concept to my old project, Past Perfect, created by doc filmmaker Jonathan Minard, experimental cinematographer Alexander Porter, filmmaker and screenwriter Scott Rashap, artist and programmer Lauren McCarthy, and animator Barak Ziv, solved its formal challenges through what they dubbed a “design fiction proposal.” In its ultimate form, Past Perfect will be a giant online data base of filmed content able to viewed, discovered and contributed to in different ways.

To launch the project, the group advertised on Craigslist a quasi-fictitious service that would back-up users’ memories on a daily basis. The creators then interviewed respondents and turned their memories of single days into four-minute short films. Two films were shown, and both were lovely, particularly one about the day of a divorced woman, a writer, as she makes her daily rounds. Echoing the themes of Lars von Trier’s Melancholia, the film finds her falling asleep at night meditating on global warming. “[Thinking] how the world is going to end is comforting when you are depressed,” she said.

I probably wouldn’t be as positive about Past Perfect if the shorts hadn’t been so elegantly done, but they were only one part of the proposal. Past Perfect will become a “massive participatory memory capture endeavor,” the makers proposed, enabling filmmakers to partner with the real people who upload their memories. The language of the submissions will be analyzed, subjected to “sentiment analysis,” and then meta-tagged, effectively mapping the world’s moods on Past Perfect’s online platform.

There’s obviously a speculative element to Past Perfect. Easy to prototype although difficult to scale, the piece blends big data with the personal in charming ways. If, as promised, Past Perfect goes live at some point, I’ll be sure to let you know.