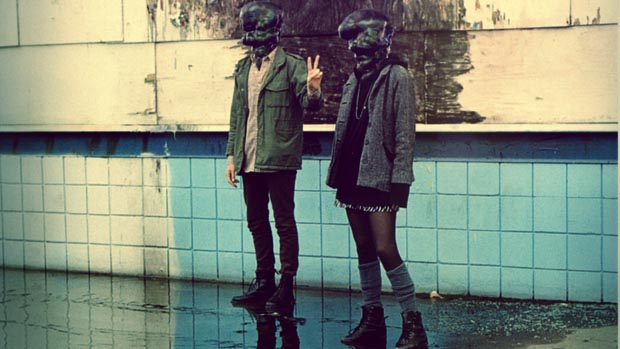 Directors Julia Grigorian and Kirby McClure, who collaborate together as Radical Friend, are following their string of innovative music videos with their biggest project yet, but you probably won’t see it on YouTube anytime soon. Following up on the technological experimentation of their videos for groups like Black Moth Super Rainbow and Yeasayer, Radical Friend has been commissioned by the Creators Project (a collaboration between Vice magazine and Intel) to make something that seems part atavistic ritual, part Cronenbergian cyber-humanism. Writes the duo in an e-mail, “Our project is The Digital Flesh, and it’s very much aligned with our video directing sensibilities, but just out in the tangible world. We are building temples across the globe (at each Vice/Creator’s Project Event) where you can enter and be three-dimensionally scanned. After enough scans have been collected we will assemble them together to become part of a giant third organism that will be summoned and holographically projected in Beijing. The experience has a kind of ritualistic/neon funeral vibe, where you are sacrificing flesh and committing yourself to becoming part of something much bigger: an electronic organism. The project evolves from city to city and you can watch and interact with this organism as it incubates on the website.”

The L.A.-based Radical Friend met in art school and instantly became collaborators, on art projects and then, after they were discovered by the band Of Montreal, on videos. “It’s pretty rewarding to make experimental work that can be considered pop culture,” they write. “We made this weird animation in our bedroom and it was all over TV and the Internet, so we continued on that path, and new opportunities started coming our way afterwards.” Of the nature of their collaboration, they write, “Whenever we think we have our roles figured out it changes. We’re back and forth between one of us being more visually and technically inclined and the other more conceptual and character inclined. It can change several times throughout a project, but no one would ever know because it happens very organically.”

Next up for the duo: finishing a short film with VFX artist Seb Caudron (City of Lost Children), and then a short narrative film about suburban teens who make themselves into shamans and sacrifice the body of a young girl. They write, “We really crave mythology, and see society and our way of life as a succession of rituals or metaphors. Something as mundane as suburban life has so much more depth than meets the eye.” — S.M.