Bobbito Garcia on Doin’ It in the Park: Pick-Up Basketball 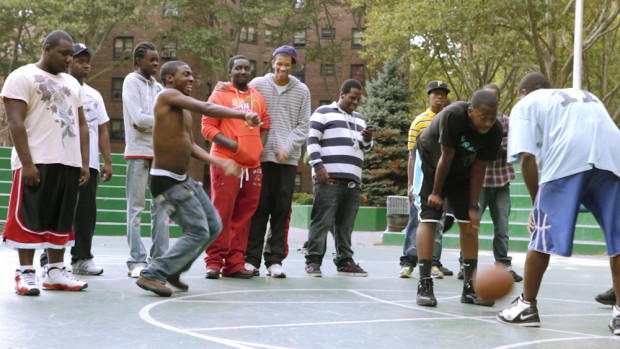 by Brandon Harris
in Directors, Interviews
on May 22, 2013

By some estimates, over half a million people play pick-up basketball in the playgrounds of New York each year. In Doin’ It in the Park: Pick-Up Basketball, filmmakers and pick-up basketball enthusiasts Bobbito Garcia and Kevin Couliau set out to create the most comprehensive document of New York City’s summer, outdoor pick-up basketball scene by visiting 180 courts throughout all five of the city’s boroughs. Shot in a breakneck 75 summer days during 2011, their debut documentary has an immediacy and intimacy that speaks to its homemade vibe, even amongst former and current NBA players like Kenny Anderson and Brandon Jennings, regulars on New York’s playground courts. Helped no doubt by Garcia’s significant basketball world connections — he edits Bounce, a quarterly magazine dedicated to streetball and has hosted Hot Minute at the Half on MSG during Knicks games since 2006 — and Eddie Palmieri’s high tempo, percussion centric score, the film interweaves standard issue archival footage and interview sections with passages of occasionally quite revelatory vérité of some of the current NYC pick-up scene’s leading lights both on the court and off. Like the late Adam Yauch’s amusing profile of top-shelf prep players, Gunnin For That #1 Spot, it jazzily provides context and human interest where some just see sweaty bodies.

Garcia, long a downtown hip-hop DJ of note under the name Kool Bob Love, became a fixture in the NYC hip-hop world during the early to mid 90’s while co-hosting WKCR’s The Stretch Armstrong and Bobbito Show, which provided listeners with some of their first glimpses of then unsigned and unknown acts such as Nas, The Fugees, Jay-Z and Busta Rhymes. A contributor to Vibe and The Source before starting his own magazine, he’s the author of Where’d You Get Those?: New York City’s Sneaker Culture 1960-1987. His debut film had its premiere at the Urbanworld Film Festival, where it won the audience award for best feature, before stops at the San Francisco Black, Regents Park and New Jersey Film Festivals. It opens in Manhattan today.

Garcia: I played ball in Puerto Rico back in 1987. My co-director Kevin, he’s been playing ball his whole life too.

Filmmaker: How did the two of you connect and when did the idea to make this film about the history of pick-up basketball in New York city and its cultural relevance come about?

Garcia: I came up with the idea back in the 90s, I just didn’t have the facility or knowledge to do it. It was appearing in all these Nike commercials which were brilliant but they were these short spots and I just thought they were the tip of the iceberg. Kevin and I met in 2004 when I was chief of Bounce magazine. And he hit me up from France and he emailed me and said, “Hey, where do I play?” So I said, “Come meet me in Harlem, come meet me in Brooklyn,” and the kid could play and he had the same amount of love and respect for not just playing but for talking about the game. And I wound up publishing his first photograph. And then years forward, he did a music video called “Heart and Soul of New York City.” I watched it and I hit him up immediately afterwards and I was like, “Yo dude, I have an idea for a documentary. Move to New York for three months, sleep on my couch, we’ll hit up courts, play ball every single day, have the time of our lives. Are you down?” And he’s a nerd like me. I think most people would jump at the chance to experience New York the way we did and as we displayed it ourselves. It was a beautiful three months, we did 180 courts in 75 days.

Filmmaker: What was that like, shooting for three and four hours at each of these places before quickly moving on to the next one? What were the logistical challenges of shooting in that many places over that amount of time?

Garcia: Well, luckily technology has improved to allow us to do something like that with just two people. Kevin had a Canon — Canon’s actually an equipment sponsor — so Kevin had the luxury of having a lens that wasn’t even available to the public yet. We rode our bikes to 90 percent of the locations. So it was just pick. We would shoot, play, record. Every court we went to we’d play. And in the case of Brandon Jennings, we got a phone call. We were there in 20 minutes. If we had a crew of 10-15 and cars parked in the Village, it wouldn’t have happened. But on a bike, you’re mobile, and also you don’t attract a lot of attention although on the playgrounds a lot of kids would recognize me because I’ve been in videogames and I was a halftime reporter for the Knicks and people know me from a radio show I used to do. But we blended right in. So that was an advantage of being a two-man crew.

Filmmaker: Obviously you’re a scholar of New York City basketball but what were some of the things you learned that you hadn’t previously known?

Garcia: I think what I realized is that the majority of ball players in New York nowadays are under the age of 21. And that’s a huge departure from what people in my age group think. Most of them imagine that kids are playing video games all day. Which a lot of them do, but that doesn’t mean they’re not also playing ball. And that they’re not playing ball a lot, they’re just playing at times when the adults aren’t out. They’re out there, they’re definitely out there, and they’re out there in force. I’d definitely say that in 2013 there’s more people playing pick-up ball outdoors than in any other era I’ve ever been alive for.

Filmmaker: And what were some of the more difficult aspects once you were in post-production putting the movie together? Were there things you had to leave on the cutting room floor?

Garcia: Luckily our editor was Kevin’s big brother, so he cared so much about the project naturally because it’s family. We had over a hundred hours of footage, but we have a couple deleted scenes that we’ve put on our website. And we have a couple of deleted scenes that we’ve made available to people and we have additional scenes that will be available on the DVD and Blu-Ray release at the end of the summer. But essentially we feel great about what made the film, it’s the film that we wanted to make. And yes, there were challenges; I would say the editing process was the least fun of it all. It was fun to be at a park for hours a day interviewing people and playing ball. It wasn’t fun to be in a little room with three dudes into the wee hours of the night looking at the same scene eighteen thousand times over. The color correction, the sound mix, all these things that are really technical that really make a film are tough. It’s kind of the same thing as writing a book or writing a feature article. You try to tell a story that engages first your audience that believes in the topic without blocking out the audience beyond that niche group. And I think with that film we were able to achieve that.

Filmmaker: You had your premiere at Urbanworld last year. Did you have many of your NYC-based subjects see the film for the first time there? How did they respond to it?

Garcia: Yeah, we screened the film four or five times before it got released. So we’ve had a bunch of amazing experiences. Urbanworld was particularly special for us because we won the audience award for Best Feature. And they were supporters of our film before that, they went on Facebook and announced the screening and it sold out a couple hours later, we had to add another show to accommodate their attendees with badges. It was great because there were people involved with our film who hadn’t seen it yet, and there were people who were just not even NBA fans or basketball fans or anything in the film world who got to watch our project and really come up to us afterwards and say, “Hey, I didn’t think I was going to like this and I love it. So that was a beautiful thing.”

Filmmaker: Documentaries that insert the filmmakers themselves as narrators is a pretty well-established device. Did you always envision using it as a way to orient the audience?

Garcia: Well we went back and forth, because initially I thought to do something like Chris Rock did in Good Hair where the filmmaker is off-camera talking to the interviewees, so we thought it might be better for me to be off-camera. So when we talked to people about it, they wanted to know just as much about us and how we did this just as much as the story and community and culture of pick-up basketball. Kevin’s brother who edited the film and our executive producer, they were really instrumental in finding a fine line so Kevin and I could talk about our journey but that was a sub-plot to the main storyline of pick-up basketball, its history and social impact.

Filmmaker: Of the 180 courts you visited, what was the most indelible experience you had?

Garcia: That’s a tough question to ask because they were all so dear. We went to one each one and documented their players, and just seeing their joy for the game and to hear them express as best they could every day… And there’s no coaches, no referees, nobody scheduling. This is all happening in an unorganized fashion. That’s the beauty of pick-up basketball. So sure each one was special, but every court was phenomenal. Even when the courts were empty, they were still alive. Kevin’s viewpoint as a foreigner was intriguing to me because I would see a court and be like, “Oh, cool,” he would see it and be like, “Wow, look at its place in the urban landscape.” And he would see the beauty in that. So he brought that forth in his camerawork.