Shooting with a RED EPIC in Indonesia: Interview with David Kruta 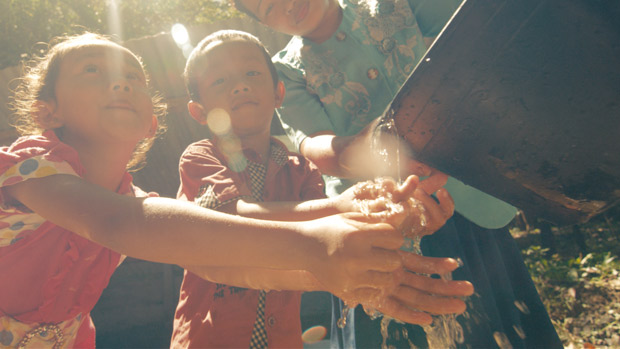 Cinematographer David Kruta spent a week in Indonesia this February shooting footage for the SurfAid charity to use in their promotional and educational campaigns. He took with him a RED EPIC, and says that the goal was to “bring a cinematic approach” to something that would be more often shot in a documentary style.

Filmmaker: How did the project come about?
Kruta: The director, Michael Lawrence, is a good friend of mine and I’ve done five or six projects with him. He said he had a shoot in Indonesia, and that he was going there to revisit the places he photographed after the tsunami and asked if I wanted to come along. Four days later, we were on a plane to Dubai and Jakarta, and then a 12-hour ferry and a speed boat and pickup truck ride to the middle of nowhere off the coast of Sumatra.

Filmmaker: What was the goal of the project?
Kruta: SurfAid is a charity based in Australia and they have a lot of programs on the Mentawai Islands in Indonesia that bring in clean water projects, anti-malaria efforts and mother and child health. They needed a couple of videos that focus on mother-child health and on their anti-malaria efforts that would be used for fundraising and to show what they have done, and what they want to do.

Our goal was to bring a cinematic approach so that the people would be struck by the images and not just be watching a typical documentary.

Filmmaker: How long were you there?
Kruta: Two weeks. I think we spent about 7 days traveling; there were only about five shooting days.

Filmmaker: What were you shooting this on?
Kruta: On the RED EPIC with Canon lenses.

Filmmaker: What equipment did you take?
Kruta: I brought a Pelican and a backpack, and managed to fit the whole kit: the body and lenses, media, batteries, as much as I could physically carry and try to keep it small because the whole shoot was in a run-and-gun setting.

Filmmaker: What were the conditions like?
Kruta: It is the Third World, so at best we had intermittent power at hotels and whenever we went out to the remote islands there were several days with no running water and no power. We had a generator at the SurfAid office that they would turn on for a couple of hours every day, and we would charge up and hope it would last through the next day.

We took bus-powered drives with us and it took about 15% of the computer battery power to dump a card, so we knew that even if we ran out of juice or weren’t able to access any electricity we would be able to offload media and keep shooting until the camera batteries ran out. Luckily, we never got into the situation where we ran out and couldn’t shoot.

I don’t think anyone has brought a camera like that out into the middle of nowhere. It was definitely interesting and I think the results reflect how beautiful, remote and untouched the Mentawais are. 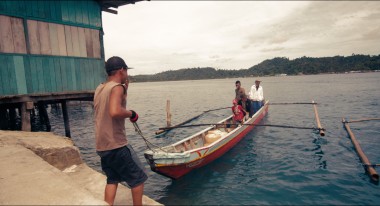 Filmmaker: Did you have any other issues or problems?
Kruta: No. That was actually the wonderful thing. We shot at 120 fps and I just kept it rolling as much as possible and the camera never overheated or malfunctioned. We even had tropical downpours and I would just throw a plastic bag over it and it just kept running. I was actually pretty blown away. We brought a Canon 7D and a 5D as backup just in case the RED went down, but it never did.

Filmmaker: What lenses were you using?
Kruta: We had a set of Canon and Tokina primes and zooms. I actually shot the majority of it on the Tokina 11-16mm. The goal was to shoot wide angle so we would see the world and the environment around the people. We could get really close and you could feel like you were in there with them. We did use a couple of the Rokinon Cine primes, and we had the 70-200 Canon zoom and a set of Canon L primes.

Filmmaker: How were you using the camera?
Kruta: I actually went for a low angle approach. I wanted to make the people look powerful and empowered, and a lot of times I was just skimming the ground running along and bringing the camera up that way.

Filmmaker: What’s the thing that stands out in your memory?
Kruta: To me it was the joy of the people. Everywhere you went you could smile and wave and everyone would smile and wave right back at you. People would always try and get your attention and invite you into their places of business or their homes and show you how they live and try to feed you or give you drinks or something like that, so it was just a really kind experience.