by Brandon Harris
in Director Interviews
on Apr 21, 2010 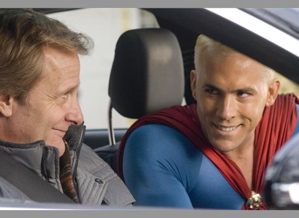 In Michele and Kieran Mulroney’s debut feature Paper Man, Richard (Jeff Daniels) is a sweet natured, struggling author who’s unlikely friendship with an alienated teenager named Abby (Emma Stone) grows increasingly tender and strange during an extended stay in Sag Harbor to work on his latest book. Although his marriage to Claire (Lisa Kundrow) is fading, his imaginary interlocutor, a caped superhero named Captain Excellent (Ryan Reynolds) keeps him plenty busy when he’s not trying to avoid working on his book or inventing new ways to keep Abby dropping by.

The married writing and directing duo, having long toiled as aspirant screenwriters, seem to have finally hit their stride, brother of veteran character actor Dermot, has dozens of television and film acting credits to his name, but he and his wife’s main gig is screenwriting, as their forthcoming credit on the Sherlock Holmes sequel attests to. An entry in last year’s Los Angeles Film Festival, Paper Man opens friday in Manhattan. 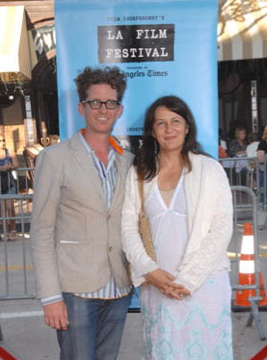 Filmmaker: Did you start as a married couple that wrote and directed movies together or as a writing/directing team that ultimately got married?

Michele Mulroney: We started as a married couple.

Michele Mulroney: That was the first mistake. [laughs] We got married 17 years ago. We’d both been writing separately. We wrote our first screenplay together 14 years ago. Its been a long haul. Directing our first movie, we knew going in that we had to make it two heads better than one. We had this idea that I would communicate mainly with the actors and Kieran would work with the technicians. Within twenty-four hours it was clear that wasn’t going to work. We had to be more fluid than that. Since we’d written this together and lived with this project for so many years, we wanted everyone on the set to be able to come to either of us an get an answer that was the definitive answer for the movie as a whole.

Filmmaker: When did the idea of this project arise?

Kieran Mulroney: We’ve been writing partners through some less auspicious times and some more auspicious times. This script we wrote always with the intention of directing it together. We wrote it on our own, for ourselves to direct, really at any level, whether it was credit cards, spare change or raising money the way we did. This is one of the one’s we always imagined doing and since we wrote it together we figured we may as well direct it together.

Filmmaker: What appealed to you about this story of a failed writer and his curious friendship with a vulnerable young woman?

Michele Mulroney: We wrote Paper Man when we were going through a sort of writing crisis of our own. I wouldn’t say writer’s block per say, but nobody wanted to read what we were writing [laughs], we were at a sort of stalled out point in our own careers. We really related to this idea of, well if you’re writing and no ones reading, no ones making your film, is there any point in going on? In that way, the writing of Paper Man was sort of cathartic.

As far as the girl is concerned, I grew up in a small town, wanting to get out of their, unsure of my footing and identity there, so there’s a little bit of that which informed the Abby character played by Emma Stone. We were also inspired by reading about the kind of reclusive life J.D. Salinger led in his later years. He would hang out at the local high school, befriending teenagers-

Kieran Mulroney: In the right way. He would go to basketball games, he was part of the community. He found some friendships with these young people because they didn’t have the expectation of him being the great author. Maybe they had read his book, but to them he was just a guy.

Michele Mulroney: He could have these clean, uncluttered friendships that allowed him to play out who he was without having anyone judge him so we really wanted to play with the idea of connecting with other people regardless of age, regardless of gender, regardless of social status, not in a heavy handed way, but look, if you really connect with someone, all those external things really shouldn’t matter.

Kieran Mulroney: Another kind of man might shy away from starting a friendship with a pretty young high school girl, but Richard doesn’t. That really doesn’t enter into his way of thinking very much. He’s not that worried about appearances, about the way the world looks at him. Its a certain self-involvement perhaps, but also there’s a certain innocence about Richard that the way the world look at what he’s doing with Abby almost doesn’t occur to him until he’s forced to think, oh…

Michele Mulroney: That does look weird to people.

Filmmaker: The film mixes and matches tones in a fairly deft manner.

Michele Mulroney: It’s a delicate tight rope act. When you get any of it right, and we know you never get it all right, but what we hoped for in Paper Man was that there would be a lot of laughter and then at a point later in the story a certain seriousness sort of creeps up on you in the back half of the film as the characters have to confront the realities of their emotional situations.

The scene we struggled most with, in the writing, directing, editing and scoring, is the scene when the adult characters of the husband and wife, Jeff [Daniels] and Lisa [Kudrow], finally have things come to a head at the end of the movie, we really wanted that tonally to be serious finally, but it also has laughs in there. There’s comic situations that arise when friends drop by the house and the scene twists in on itself and its witness by people outside the marriage. That feels like real life to us. So often at times of frustration and conflict in our own lives we find something that cracks us up and it sort of shakes you out of the funk you’re in. So we didn’t want to be slaves to tone. We wanted to honestly explore situations and see what tone naturally came out of them.

Filmmaker: Jeff Daniels has played a number of writers before, but this one feels quite different from say the novelist father in The Squid and The Whale.

Michele Mulroney: Jeff in real life is quite a good writer, he’s got a theater company, so it was easy for him to tap into Richard’s issues and frustrations. Because Jeff comes from a theater background, he is very script driven. He has a lot of respect for it, he doesn’t fiddle around with the words, if the writer wrote something specific, he tends to trust you. So on that level we were spoiled rotten. It was a joy. We shot the picture in 25 days and Jeff is in almost every scene. Jeff was moving fast. He wasn’t afraid of Richard’s insecurities, understood the conflict between his character and the wife, and was really open to seeing how the relationship with the 17 year old girl would develop.

Kieran Mulroney: He comes across as a very smart actor. But a sort of everyman smarts as opposed to a professorial smarts. Its rare commodity, to find a guy who is really smart, and really deft and equally skilled and comedy or drama.

Filmmaker: What’s the financing environment for a film like this these days?

Kieran Mulroney: We started shooting this right before the financial collapse, literally days before. We know of a lot of projects that fell apart almost immediately after. It feels like we got in the door right before it shut. That said, it’s always difficult to make independent films, but if you beat the bushes enough, there are people out there who want to make films.

Michele Mulroney: We had the project set up several times and came close to making it on a couple of occasions over several years.

Filmmaker: Was it cast contingent?

Michele Mulroney: Yes, but often it just takes one brave and often crazy actor to say yes that can give your financiers a sense that the project can attract other recognizable names and may, as a package, seem like something that could make its money back.

Kieran Mulroney: Raising a lot of money is not an option anymore. You raise a little money and make the movie you can.