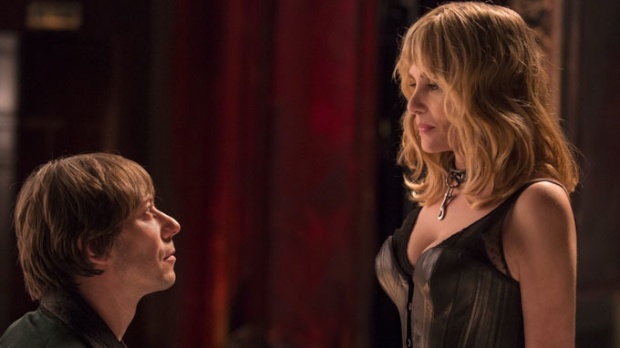 My last day in Cannes brought about a number of mixed emotions: relief that the somewhat grueling schedule of waking up for early morning press screenings was coming to an end, disappointment that my time at the festival was over (and that I was shut out of the afternoon screening of Jim Jarmusch’s Only Lovers Left Alive, bringing unceremonious closure to my festival experience), and excitement that I have had the experience of attending a festival like Cannes where there is so much energy devoted to the idea of cinema.

Two of the last films I saw at the festival, though remarkably different in terms of subject matter, focused from very different perspectives on the issues of power and domination. The first, Roman Polanski’s Venus in Fur, engages with the role the director has in dominating his actors, developing what might be considered a kind of meta-critique of the artistic process. The other, Katrin Gebbe’s Tore Tanzt, depicts the radical passivity of a young Christian convert and a cruel family who responds to his compliance by abusing him in every way possible.

One of the brief asides in Roman Polanski’s adaptation of David Ives’ wickedly funny two-person play, Venus in Fur, is a scene in which the female lead, Vanda (Emmanuelle Seigner), is psychoanalyzing her male counterpart, Thomas (Matthieu Amalric), the director of a play for which Vanda is auditioning. Vanda is hypothesizing about Thomas’s life and gets him to disclose that he has a Labrador named Derrida (she had discussed Bourdieu), after the famed deconstructionist theorist. The joke prompted one of the biggest laughs in the Palais (it’s less clear how such a joke might play for people without too many years of grad school in the humanities or too many years invested in French literary culture), but it provides a key to the play and to Polanski’s fast-moving adaptation and the ways in which his film functions to tear apart and rebuild the gender politics of classical literature and drama, and of the dynamics of male directors (including Polanski himself, who admitted during the post-film press conference that he “dominates” his actors) trying to control passive female performers, who often function as objects of a male gaze. It’s also about the politics of authorship and the ways in which writers who adapt others’ texts may have their own anxieties about the originality of the material they produce.

At the beginning of the film, Thomas is working to cast an actress for his stage adaptation of Sacher-Masoch’s novel, Venus in Furs, in which the principles of masochism were introduced. He is complaining on the phone about all of the young, talentless, shallow actresses who don’t understand the material he has written and who refuse to take direction when Vanda bursts, quite literally, into the theater. As Seigner plays Vanda, she is almost a force of nature, charging in, but showing all of the characteristics — she initially seems not to have read the play — Thomas has just decried. She also seems a little too old and world-weary for the part, a detail that Polanski’s film ultimately turns on its head. Gradually, however, Vanda begins to take control, subtly convincing Thomas to allow her to audition, and soon Vanda is adjusting the lights, making suggestions about staging, and commenting on the dialogue, which she finds both improbable and sexist. As they rehearse the lines, we see Vanda evolving into the character from the play. Soon, Vanda is role-playing as Thomas’s psychiatrist, demanding that he cut off phone contact with his fiancée, and eventually forcing him to wear drag. On this level, the film sustains an effective depiction of the relationship between gender and performance. The film is consistently funny when Vanda is manipulating the younger director, undercutting his assumptions about the play, about the meaning of Sacher-Masoch’s work, and about the choices Thomas has made in adapting it. The film moves briskly and manages to remain lively, despite its reliance on basically a single set and only two actors. Still, it’s not quite clear in places whether the film embraces the gender critiques articulated by Vanda. During the press conference, Polanski seemed to stumble over a question about how his views on gender have evolved over the years, offering a rambling answer about “the pill” being liberating before asking the press to direct questions to the cast so he could “take a breath.” This ambivalence about gender remains somewhat unresolved in Venus in Fur, and it left me feeling a little skeptical about the film’s and Polanski’s aims.

Katrin Gebbe’s German Un Certain Regard entry, Tore Tanzt (“Nothing Bad Can Happen”) was one of the more polarizing films of the festival, receiving a smattering of boos initially, although those were eventually drowned out by cheers in the screening I attended. Tore Tanzt deals with deeply unsettling material, in this case the abject humiliation of a young man named Tore by a slightly older couple who take the young man’s passivity — a product of his desire to follow Christ at an extreme level of dedication — as a cue to physically and emotionally brutalize him.

When the film opens, Tore is being baptized into Christianity in a ceremony in a lake, led by a couple of tattooed and pierced young adults who call themselves “Jesus freaks,” his face lit with a sense of transcendence that comes from pure belief. After converting, Tore invests wholeheartedly in the mission of his fellow Jesus freaks to win converts, renouncing anything connected to sin or the secular world, and even appearing to perform a minor miracle when he prays for a car with a dead battery to start — and it does. The car belongs to a man named Benno, and Tore’s sense of purpose draws him to become involved with him and his family, joining them for meals and helping around the house, even though Benno only allows him to live outside in a tent. Gradually, Benno and his wife’s abuse of Tore escalates, as they dream up increasingly sadistic ways to mistreat him, especially when the young man continues to take every punch and every humiliation — including graphically sexual abuse — without showing any sign of resistance. The result is a deeply unsettling film but one that also seems to offer little explanation or context for interpreting the dynamic between Tore and his abusers. Is his radical passivity simply the logical extreme of the admonition to “turn the other cheek” when someone attacks you? The film is structured around the three virtues of love, faith, and hope, but these virtues are depicted with an extreme pessimism that leave little room for optimism. Tore Tanzt is a bit heavy-handed, and overly bleak, but it has some merit, especially in its compelling storyline and solid cinematography. It’s an impressive debut feature, one that will challenge audiences and critics alike.