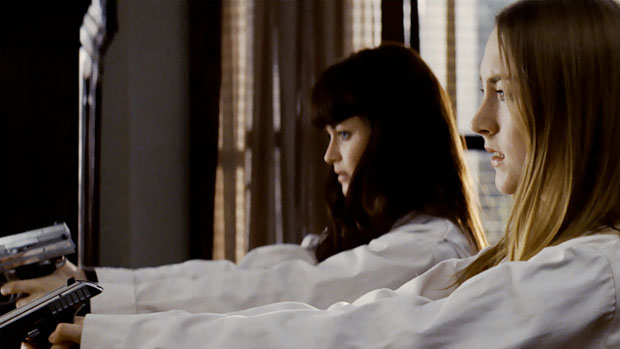 by Brandon Harris
in Directors, Interviews, Screenwriters
on Jun 5, 2013

An often stirring and certainly very odd meditation on the difficulties and ambiguities of love and friendship about a pair of female teenage assassins, Violet & Daisy is the debut feature of Oscar-winning screenwriter  Geoffrey Fletcher (Precious). A tricky balance of near camp, New Wave aesthetic hijinks and earnest melodrama unfold in this three-handed chamber piece and are for the most part deftly pulled off by Fletcher and his collaborators, who have made a film that is reminiscent of both grindhouse cheapies (Danny Trejo is in it after all, albeit very briefly) and Godardian reveries. Ex-Gilmore Girl Alexis Bledel and Atonement‘s Saoirse Ronan play the title characters, who we first meet as they pull off a Tarantino-esque hit with panache. They remain disaffected by their line of work, plotting in their spare time to buy barbie dresses with their pay. Violet and Daisy are irrevocably changed, however, when a new target, played by James Gandolfini as a calm and generous sad sack who is clearly and inexplicably courting the death that the business end of the duo’s weapons offer, exposes them to his own 11th-hour bid for redemption and their own consciences.

Violet & Daisy premiered at last year’s Toronto International Film Festival, where it was acquired by Cinedigm. It opens theatrically on Friday. 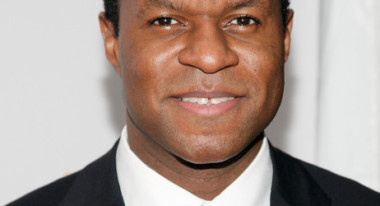 Fletcher: Well, one is a crime drama and the other a coming-of-age film. In a way that, I thought this was an opportunity to explore both of those genres in a way. So many great things have been done in both genres, I thought there was an opportunity to provide a new perspective by having our heroes be young women who wield weapons but remain women. The film starts off with one tone and feels almost like a graphic novel, but then it ends in a different place. The style of the film changes as the characters do. It reflects the characters’ detachment from reality and it reflects the journey from the characters’ attachment to reality to their connection with their own humanity. Along the way, it bends and blends genres and tones and yet there is this throughline that remains regardless of all of the wild, surreal, startling things that happen, there is this exploration of friendship, love and redemption.

Filmmaker: The tone of the film seems like a bit of a highwire act — the movie is about professional killers who are ironically very young women and yet the film does everything possible to make us accept that at face value and not find it absurd. To that end, you use a lot of New Wave-y techniques; iris ins and outs, Brechtian chapter cards, a score that feels like Georges Delarue might have done for François Truffaut in Jules et Jim.

Fletcher: I’ve never heard anyone compare it to their work and it’s an honor because I think the world of that film. It’s one of the great films of the French New Wave and the French New Wave had a profound impact 0n this film. The French New Wave had a giant influence. So did films of Japan and Italy, American films of the 70s, graphic novels from the 80s. But those old French films had such a spirit and playfulness, an irreverent nature to them. They were pushing boundaries not just for the sake of pushing boundaries, but as an exploration. I think it would be wonderful to see more of that spirit in today’s films, but the times have changed. So many times a great creative period is inextricably bound to its era. The New Waves of the 60’s, and not just in France, can’t be recreated, but perhaps new movement that come out of new eras can emerge.

Filmmaker: After winning the Oscar, surely a number of doors opened for you to put together a film. How did that help this film emerge? What was the process like on this movie versus other movies you’ve tried to put together in the past?

Fletcher: Well, the script received a lot of interest from remarkable artists working on both sides of the camera. That was an enormous help. There were several companies interested in financing the film. It’s very hard to get any film made, but with these talents it was a great help. We have the great production designer Patricia Von Brandenstein, an Oscar winner for Amadeus, we have our editor Joe Klotz, an Oscar nominee for Precious, Saoirse Ronan, an Oscar nominee for Atonement, Marianne Jean-Baptiste, an Oscar nominee for Secrets and Lies, James Gandolfini and Alexis Bledel and Danny Trejo, iconic actors who are remarkably gifted, with devoted followings. Everyone in this film really does some incredible and inspired work. We all embraced this very particular universe and I think people will see new sides and dimension of the abilities of all of those involved.

Filmmaker: Would you consider yourself a design-oriented director who relies on a tremendous amount of visual preplanning or someone who is more intuitive in terms of the camera work and coverage?

Fletcher: I come in with very specific shots in mind for every scene, but I also like to be open to whatever the moment will give me. An example of that might be, if the sun happens to be moving in a certain direction and we can incorporate that over a character’s shoulder, if we already know exactly what we want, it’s easier to incorporate these little gifts or overcome certain setbacks. If we’re running short on time in a location, knowing the overall idea, the overall plan, makes it easier to adapt. To me, planning shots and planning edits is one of the pleasures of the work.

Filmmaker: Once you got into post-production, especially as a first time director, did you encounter a gap between what you had set out to do and what you had achieved? If so, how did you surmount that gap?

Fletcher: Through pre-production, through the script, through production, through post-production, you hope that the spirit of the piece remains in tact. A lot of times, when you get into the editing room, the movie will start to speak back to you. The important thing is to listen to the movie. You can spend a lot of time telling the movie what to do, you spend a lot of time directing the movie but if you spend enough time with it, the film will start telling you what to do and often what it’s trying to push you toward is retaining the initial spirit of the piece.