The World Is Your Ouya 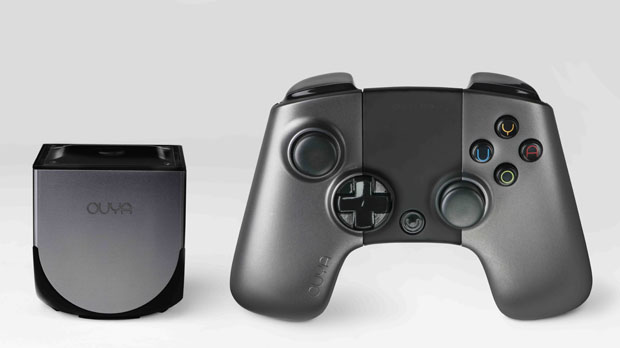 E3 is the big videogame industry show, where all the console makers and big publishers show their wares for the year to come.

The big news this year was the next-generation consoles from Microsoft and Sony. It was a week of epilepsy-inducing noise and lights and people shouting at each other about AMD chips, Radeon graphics processors, dualshock controllers and how the latest versions of Warfare this or that will blow your mind.

The news that caught my eye, however, happened in a parking lot across the street from E3.

But let’s start at the beginning.

In 1977, Atari set the world aflame when it introduced the Atari 2600, one of the first videogame consoles. Things were good. Atari was making bucketfuls of money, and so was everybody else associated with the 2600. Everybody and their brother-in-law wanted in on the act because, as one game designer told me many years ago, all you had to do was throw a game up in the air and wait for the money to start pouring down.

But there was a problem. By 1983, so many people were making games that the market became flooded — and not just flooded, but overflowing with games that were, in a word, lousy. Anyone could make a game for the 2600, so anyone did. By Christmas of 1983, retailers, overwhelmed with product, started slashing prices, and consumers, sick of buying games that weren’t any good, stopped buying. The market crashed, and everyone said that was the end of videogames.

Now, we all know videogames are alive and well today, so here’s what happened next.

Nintendo came along with a brand new innovation: encrypted game cartridges and an intensive certification process so that only approved game developers with approved games could release anything for Nintendo’s console, the NES. Thirty years later, that’s still the business model. To make a game for the Xbox, Playstation or Wii, you have to work either directly for Microsoft, Sony and Nintendo, or with a big third-party publisher who takes a big bite of your profits and has ultimate approval of what you make.

As you can imagine, this has not been a great system for the Little Guy or for those with a hankering for independence.

Which brings us back to the parking lot across the street from E3.

Sidestepping the official E3, in a booth across from the Los Angeles Convention Center’s South Hall, were the folks from Ouya. Ouya is a new game console with an Android operating system that requires from developers only that players be allowed to try every game for free.

“It’s an open system versus a closed system,” said Ed Fries, who’s an advisor to Ouya and was one of the original Xbox team. “The question is: just how big can it be?”

In other words, the Ouya is open to developers of all shapes and sizes. It’s much more along the lines of the Apple store than the Xbox — only all games. If you want to build a game for the Ouya, all you need is an Internet connection to download the development kit and the Ouya itself ($99) to test on.

It’s hard to emphasize just how different this is from how things are usually done in the game biz. When the Xbox and Playstation first launched their online portals — Xbox Live Arcade and the Playstation Network — people thought the rise of downloadable distribution was going to lead to a new dawn of indie games. And indeed, these channels provided wide spread distribution for the work of indie pioneers such as Jonathan Blow and thatgamecompany.

But for every success such as Braid or Journey, thousands more struggle even to get into the system. Xbox, for example, only allows a small number of games on its Xbox Live Arcade, and getting a launch slot is next to impossible if you’re not a known quantity. “Indie” very quickly established its own star system, and breaking in became nearly impossible for the next wave. (Complaining about the way Xbox Live Arcade treats developers is a cottage industry online. Ask an indie developer about the certification process at your own peril.)

And even at online stores such as Steam, run by Valve with the best of intentions, you need a deal to be accepted. Getting a deal means having the right kinds of relationships, and we all know “relationships” aren’t easy things to come by if you’re a newcomer or an outsider trying to get a foot in the door.

Ouya raised $8.5 million in a Kickstarter campaign last year — the second-biggest campaign Kickstarter has ever hosted — and it recently raised another $15 million from investors. It now has on board big-name folks such as Fries; former Electronic Arts chief creative officer Bing Gordon; and Kellee Santiago, formerly of thatgamecompany.

In other words, people are paying attention. In fact, not in ways the people at Ouya are always psyched about. On the second day of E3 somebody called the police on them. Was it the Electronic Software Association, which puts on E3 and represents all the biggest companies of the biz? The Ouya folk certainly thought so. But then, if you want to change the way the game is played, you’re going to have to tussle.