Doing It in One on Colorless Green 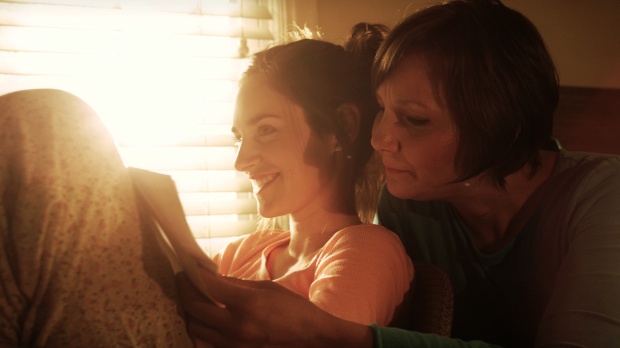 by Ryan Eslinger
in Filmmaking, Production
on Aug 2, 2013

“Hey Ryan, can we talk about the scene we’re shooting tomorrow?”

Casey Wilson, the director of photography, was sitting off to the side of the football field when he called me over. We were waiting for the sun to go down so we could get a shot of a football game at magic hour for the opening of my new movie, Colorless Green. It was the first moment all day we’d had to talk about the next day’s work.

“What do you think about doing it all in one shot?”

I could feel my eyes narrow. For the next two days, we were supposed to be shooting a critical scene in the middle of the film where the main character breaks into a house. It was a complex setup to begin with, but to make matters more difficult, we had multiple police officers in the scene (who were to be played by actual Salt Lake Unified Police Officers). Not to mention the fact that we were talking about covering 12 pages in this one sequence.

“Would that work?” I asked, wondering if sleep deprivation was a factor in what seemed to be a ludicrous idea.

To be completely honest, I was skeptical. It seemed like a huge risk to take. We only had the police officers for one day, and if we didn’t make it work, we would have no police coverage for the scene. Plus, with a three-to-four hour setup and rehearsal for the shot, we wouldn’t even know if it was going to work until halfway through the day. Time we really couldn’t afford to make up.

On the other hand…some of my favorite shots in movies are long, extended takes. There is a scene in All the President’s Men, for example, where Robert Redford manages multiple phone calls while tracing the money back to the White House in a shot that’s six minutes long. I love shots like that. By choosing not to cut away from the action, Alan J. Pakula added a layer of complexity to an already intense moment with the additional juggling act between the actors and crew.

“So what do you think?” Casey asked.

Fifty meticulously planned out storyboards raced in the back of my mind–as a kind of internal counterargument to Casey’s — before I turned to him and said, “Let’s do it.”

The initial idea for Colorless Green came about after I read an article discussing the possibility that the fifteenth Wizard of Oz book was written by someone other than L. Frank Baum. Then, an investigation also opened up regarding whether or not Shakespeare actually wrote all of his plays, and that’s where I discovered stylometry.

Stylometry is basically a comparison of two sets of writing. And using computer programs that analyze the documents in question, researchers can determine — within a margin of error — if they were written by the same person.

As a matter of privacy, we need writing to be anonymous in some cases — anonymous quotes in newspapers, for example — and it seemed like stylometry opened up a world of problems and possibilities. I felt like suddenly we were living in a pre-DNA analysis world, or a pre-fingerprint analysis world, and our writing “fingerprints” were going to start catching up to us rather quickly. This eventual merger, or crash as some would see it, fascinated me.

I had long thought about writing a story about a girl living in suburbia who hunts bombers (like the Boston bombers) from her home computer. What I didn’t know was the mechanics of how exactly she would do it, so when I heard about stylometry, the idea clicked. My character, Nora, uses a computer program that can identify anonymous content posted on anti-American websites. And after identifying two individuals whom she believes have perpetrated an attack on the state supreme court, she follows them in an attempt to gather evidence and prevent further attacks.

I made the lead a female mainly because of the resistance my mom experienced becoming an engineer in a mostly male-dominated profession. And taking a hard look in my rolodex of favorite characters I found it disheartening that they too were all men. So I created a kick-ass female computer geek to fill the void.

When I was in college back in 2002, I made a feature called Madness and Genius, which went to Toronto, won the Sloan Award, was nominated for an Independent Spirit Award, and got me an agent at William Morris. I had already written my next script, When a Man Falls in the Forest, and pre-production was in full swing. As part of the Sundance Directors Lab and the Cannes Atelier Lab, the project was supported by a number of influential people. Sharon Stone became attached to star in it, and my agent secured financing for a $2 million budget. I was 22 years old and thought I had the world figured out.

Then the movie premiered at the Berlin Film Festival and the reviews were not favorable. What followed was a series of cliches. The phone stopped ringing. People stopped returning emails.

However, while I was at the Sundance Directors Lab I met Steve Luna, an actor who took part in a couple of the scenes I filmed. Over the years that followed we kept in touch, so when he mentioned having connections throughout the state of Utah for locations, actors, financing, and other resources, I jumped on it. We flew into Salt Lake City, spent a few days scouting, spoke with Derek Mellus of the Utah Film Commission and decided that both aesthetically and talent-wise, it made sense to shoot Colorless Green in Utah.

From a production standpoint, Colorless Green is by far the largest and most complex film I’ve attempted. It involved a large principal cast, hundreds of extras, and dozens of locations. Several scenes involved rigorous fight choreography, which I had never before attempted. So, this one-shot monstrosity which Casey had conceived and I agreed to…I needed it to work.

Which is why, when I heard Casey yell “Cut,” I nearly jumped out of my skin in anger. We were on take 13 with the sun threatening to sink beneath the horizon, and things just kept going wrong. Stripped bare and broken down to its essential parts, the camera was as compact as it was going to get and still it would occasionally bang against a wall or get caught up in drapes as Casey moved through the house. The fluidity of the camera was just the beginning though: we also had cop car arrivals, multiple actor entrances, and an additional getaway car that had to be timed and coordinated perfectly.

On take 13, everything seemed to click. Steve would run from the back side of the house to the front following the action and cueing everyone for their marks. Camera was moving along, cops hit their mark, actors nailed their entrance times and Beau Gourley, the sound recordist, had perfectly choreographed his movements to match Casey’s so that he was like a fly on the wall. It had almost become like a dance.

But four minutes into the shot, just as the police officers were leaving, Casey called “Cut,” and I just about lost it.

“What? What happened?” I shouted from somewhere in the house where I was hiding to stay out of the shot.

It was the perfect take, and the battery died.

I could feel the energy of the crew deflate. Frustration mounted.

It wasn’t just this scene that was at stake for me. I felt like I was stepping up and proving myself with this movie. Shooting 115 pages in 25 days with as many complex scenes as we had, was insanity. “Let’s go again,” I said. And my crew, which somehow always managed to collect themselves, stepped up to the challenge, and we gave it another go.

Take 14: the timing was off again on the arrival of one of the vehicles.

“Again,” I said, wondering if I was about to be a crew of one the following day. But, we reset, the cars pulled up on time, the camera steered clear of the walls, sound was nowhere to be seen, the police officers landed their lines perfectly– everything went off without a hitch. Take 15: only two takes later, we had repeated what we thought was the lost “perfect” take.

When all is said and done, I know one shot isn’t going to make the movie. In the broad spectrum of film, I hope Colorless Green raises larger questions in people’s minds — mainly, is Nora wrong in what she does? After all, stylometry is not an exact science. But then again, neither is ballistics or many other criminal forensics techniques. Moreover, how many times have we heard about a school shooter having posted an online manifesto describing what they were going to do? If stylometry could uncover the true identity of the troubled person before an attack, might we be able to prevent some of these shootings?

I hope to deliver a thrilling and entertaining film. I’m extremely proud of not only what my cast and crew accomplished on our six-minute scene, but every other scene as well. Colorless Green is currently in post and we anticipate submitting it for festivals in the fall.