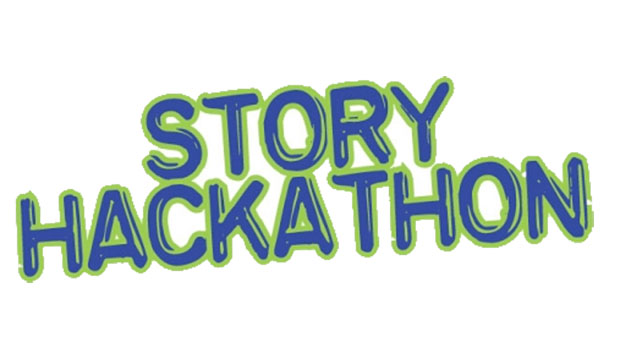 by Mike Knowlton
in Filmmaking, Transmedia
on Aug 29, 2013

What do you get when you mix a live Steve Jobs-esque pitch presentation and the concept of dating insurance? Or a story about an abducted woman who suddenly appears via webcam, live in front of the audience?

You get the first ever LA Story Hackathon of course! StoryCode recently partnered with Createsphere, Transmedia LA and Transmedia SF to produce this event that was held as part of the Transvergence Summit in Hollywood on August 7th and 8th.

At StoryCode we are interested in supporting the development of new, immersive forms of cross-platform entertainment. Everyday, innovators are creating new forms of entertainment by exploring Story + Code. To do this they apply the principles of software development to traditional storytelling. So what happens when you bring ideas like rapid prototyping, making little bets, failing quickly and minimal viable product and combine them with storytelling?

To find out we mashed up the established “hackathon” format from the tech world with fictional storytelling to create the Story Hackathon. The idea is to put time-based parameters around the creation process to force immersive storytellers to focus on cutting the fat, working fast and smart to create viable prototypes of their stories.

To provide advice and guidance for the teams, a number of mentors were available including:

The Teams and Their Hacks

We met with the five teams on Wednesday morning and held a quick kickoff where we reviewed the challenge. Then the teams went to work. Each team had a unique style of working ranging from heads-down keyboard tapping in silence, to free-for-all ideation sessions out on the balcony.

Tech hackathons are through-the-night events, and a Story Hackathon is no different. As one may imagine the energy in the room ebbed and flowed throughout the event. The following morning found each team sharing a look of bleary-eyed exhaustion combined with adrenaline-fueled excitement.

The result was an amazing level of creativity and production. It never ceases to amaze just how much people can create during a fixed and focused period of time. Here’s a quick rundown of each team and the cross-platform story hack they created during the event.

Hack: Look Straight at Me (The Search for Tout Bagay)

Helena Martinez is an avid street art blogger who tweets @StreetArtBloggr. In the real world graffiti pieces are marked with QR codes. Helena and fans post pictures of the graffiti murals on social media. She discovers the work of Tout Bagay who teases her on Twitter as she discovers and writes about new pieces. Helena posts videos on YouTube as she searches to find out the true identity of Tout Bagay.

Mix a little Steve Jobs-esque pitch man presentation, with the concept of Heartbreak Dating Insurance and you have When Dating Goes Wrong. The story starts with a live presentation from Dr. Matsumoto, the greatest inventor in the world. After one too many dating failures, Dr. Matsumoto created a revolutionary new way to predict dating success or failure.

The story continues with a hilarious video that shows the amazing new technology and the clients who are thrilled with it. Members of the audience can even log into the website using Facebook Connect to get their “WTF” Score – their Willingness to Fall in Love. Marching Penguin is an advertising agency that puts online video at the core of client initiatives.

In the not too distant future, world governments use a DNA altering product called “Vaccine23” created by Cynetic Industries to cure disease, keep track of the population, and create a sense of utopia. Meanwhile, an underground resistance organization called “GPA” or Genetic Preservation Alliance has formed to stop them, as they believe it is a way to control humans. They work to take down Cynetic and find the immunants – people who do not respond to Vaccine23 – to find a way to study their DNA and hopefully breed with them.

The hack included a mix of video, live performance, Twitter, a mobile app, live streams of the Cynetic Industries takedown, and a website. Participants in the live performance were given various ways to engage in the story. They could join in on the live Twitter feed, attempt to join GPA via the mobile app (after the performance), or simply sit back and enjoy the theatrics of the story unfolding around them. IndigoInk is currently in the process of developing a web-series around this idea, and will continue to hack the various platforms.

The girls of South Pasadena Academy are having a busy summer! Between surfing, boys, dance parties, BFFs, shopping, and endless coffee runs, they’re also getting ready for the SPA/Eagle Rock Science Invitational, a SoCal summer tradition. The morning of the science fair, Alannah Hernandez, senior at South Pas and winner of the 2012 Fair, goes missing. Her project is in the gym. Her car is in the parking lot, with her backpack in the trunk. What happened to her?

Join the police task force as they interview friends and suspects; dive into her life from the week leading up to her disappearance by combing social media profiles, online posts and pics of the girls (and their bfs); investigate clues on the online interactive investigation board; and ultimately discover answers to questions that will move you from one chapter to the next, until you figure out what happened that fateful July morning.

The story played out on multiple websites and social media platforms, with video briefings at the beginning of every chapter and a tip line that just might help you out in a jam.

A band of misfits prepare to “protect” Earth from an alien invasion by running a conspiracy blog and a mobile text-connect app. Nelson, becomes convinced that a woman he knows, named Molly, is actually an alien and he releases stalker videos of her, to convince other believers.

He believes so strongly in this fact that he kidnaps her and webcasts various tests he runs on her. The climax of the story plays out in real-time in front of the audience where Molly interacts with the audience. Is she an alien? Will she escape and exact revenge upon Nelson? Only audience members and webcast viewers learn the answers to these burning questions.

Sponsors who helped shape and support the event included:

The Winner
Each team presented their Story Hack to the conference attendees and the audience voted on the winner. It was a nail-biter between the hilarious “WTF” idea from Marching Penguin’s When Dating Goes Wrong and the live gun-totting futuristic thriller from Indigo Ink. And the winner was… Dr. Matsumoto and When Dating Goes Wrong.

Each member of the winning team received a Canon camera bag filled with an assortment of transmedia industry books and a Samsung Galaxy phone. Truth be told the teams did not compete in the Story Hackathon to win a prize, they participated because they understand these types of events are an important step in the new way stories are being created. They wanted to experiment, prototype ideas and present their innovative work to the community of fellow immersive media professionals.

What We Learned
The L.A. Story Hackathon was the second such event that StoryCode produced and we have learned a number of things. First, sleep is overrated! While coffee and Red Bull can help keep you up through the night, it takes planning and dedication to participate in an event like this. You need to set milestones for progress and constantly analyze and react to how the team is doing based on the final deadline. If you are falling behind, you need to cut aspects of your vision, and move on quickly.

In order to create native cross-platform stories you need a cross-discipline team that includes both storytellers and developers. The core idea needs to be born “digitally” as opposed to trying to shoehorn a traditional piece into a new form.

The biggest takeaway for me was the juxtaposition that occurred when the Story Hackathon presentation followed the conference’s various sessions and panels. On one side of the conference you had industry-leaders talking about their innovative cross-platform work. On the other side of the conference you had creators making original cross-platform stories in real-time. Experiencing both of these tracks (talking and making) at the same event provided an experience I had not really seen before. It was truly inspirational.

The Story Hackathon model for creation is no secret anymore and we encourage others to adopt this approach to building community and providing immersive media creators with a place to produce and present their work. In addition to this article, we have open-sourced a summary of our first Story Hackathon:BETA. Take what we’ve done and improve it. Introduce your own ideas. Yes, it’s exhausting to produce a Story Hackathon but we believe these types of events will help bring focus to new immersive media creators and their work. Please pass the coffee.