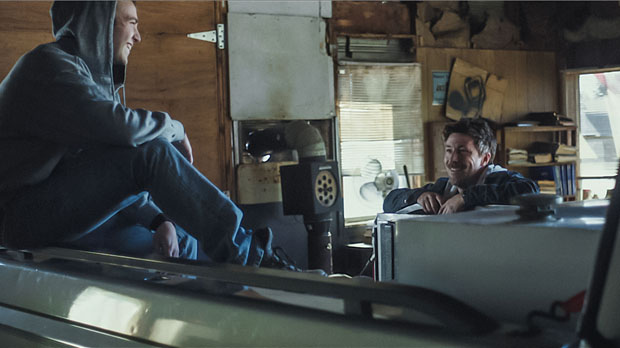 Beneath the Harvest Sky

Filmmaking team Aron Gaudet and Gita Pullapilly first made their mark on the U.S. independent scene in 2009 with the documentary The Way We Get By, a heartwarming festival favorite about a trio of senior citizens who have spent years greeting U.S. troops returning from combat as they arrive at Bangor International Airport in Bangor, Maine. Four years on, the pair are once again telling a story set in Maine, but this time it’s a bleak, fictional narrative. Beneath the Harvest Sky, a 2013 IFP Narrative Lab project, tells the story of two teenage best friends whose paths in life are sharply diverging: Dominic (Callan McAuliffe) is spending the summer helping out his parents with the potato harvest, while Casper (Emory Cohen) becomes involves in his own “family business,” joining his father (Aiden Gillen) as he smuggles prescription drugs across the Maine/Canada border. Beneath the Harvest Sky has its world premiere at TIFF today (screening details here), and Gaudet and Pullapilly spoke with Filmmaker beforehand about the process of shifting from doc to narrative — and also their innovative marketing partnership with Terra Chips.

Filmmaker: How did you find the move from narrative filmmaking from documentary? Had you always wanted to do fiction?

Gaudet: I think we both found the move to narrative filmmaking challenging but extremely exciting. The plan was always to do narrative fiction projects. We both started our careers in television news, and I think we agreed a documentary seemed like a perfect bridge between where we were and where we hoped to be. A documentary certainly seemed much more doable when we were just starting out. After The Way We Get By, we felt confident in ourselves as storytellers, and I think that was the foundation we built our move to fiction filmmaking on; if we could just tell another good story, it wouldn’t matter whether it was fiction or non-fiction.

Pullapilly: I think having that documentary background proved to be incredibly helpful to us in making Beneath The Harvest Sky. We knew that performance and story were going to be vital. In documentary, you learn so much about authenticity when you are interviewing and filming real people in their everyday lives for years. And your bullshit detector gets honed pretty quickly. If an audience doesn’t believe the person on screen, or if the decisions being made seem out of character, you lose people, no matter how good it looks. So, when we were on set and something felt false or a line of dialogue seemed off, Aron and I quickly knew we needed to change it up or give a note.

Filmmaker: How did the way that you work together change in this film?

Gaudet: The biggest difference in the way we were working together was by credit alone. This was the first time Gita was officially credited as a director on one of our projects. But in truth, I think what we realized in our process is that we both really do everything. Gita may slant more towards the producing side, and me the directing side at various times, but overall, every writing, producing, and directing decision was something we were making together. It felt appropriate to try to make it clear that we both had our hands in everything.

There was certainly a learning curve when we started production, and we realized how critical people management was as part of the process. After making a documentary with a crew of three (including the two of us) over an extended period of years, it became critical to understand how to now steer a much larger cast and crew in a singular direction over the course of 35 production days.

Pullapilly: For the last nine years, Aron and I have set goals and have made action plans and decisions on how to accomplish them. I think when you add more people into that decision making process in production, it can become difficult because there are a lot of decisions to be made, and you have to trust that the information you’re getting is accurate. It really does come down to personality management and making sure you find the right people to go the distance with you, people that you trust and have your best interests at hand. I think we learned on this film how to be better leaders, and we’re excited to test new methods in production on our next film.

Filmmaker: What kind of preparation did you do as directors for working with your actors?

Gaudet: The first thing we did with each actor was sit down and try to understand each of their processes, and how they liked to work. It was important to us to figure out how all the actors could work well together on set. We then talked with them about what we hoped our process would be, which was to explore within each written scene for an authentic truth beyond any words we had written. We would always have the script to fall back on, but we made it clear as writers/directors that the script was a jumping-off point, and each actor should feel comfortable to explore beyond that if it felt real and true to the story we all wanted to tell. Collaboration was an important word on set.

Pullapilly: We also wanted to make sure that the actors were comfortable knowing that there would be two directors on set, but making it clear to them that there would be one voice of direction. So early on, Aron and I decided that after each take, we would talk first privately, then go and give any notes. I think that made a big difference in making sure our actors trusted us. And I think it made the actors feel more comfortable knowing we were both seeing and signing off on a performance, or staying on set until Aron and I both felt we achieved the goals of the scene.

Filmmaker: How familiar were you with the world of the film? How much research did you do?

Gaudet: We treated researching and writing the script for Beneath The Harvest Sky almost like we were making a documentary. We immersed ourselves in the world of potato farming and prescription drug dealing, and we talked with everybody we could. We interviewed potato farmers, high-school teens and teachers, law enforcement, inmates in the jail, anyone that could tell us what life was like in these small rural towns along the Maine/Canada border. I can safely say at least 85% of what happens in the film came from a real story we were told during our research. And then we wrote to real locations that we would visit. It was always funny when a cast member would arrive in northern Maine, and instantly start to recognize locations from the script. We strove for authenticity above all else.

Pullapilly: In January 2011, Aron and I moved to Maine from New York City in one of the worst winter storms to begin research on this film. We knew if we were going to tell this story right, we were going to have to commit to it from Day 1. This became such a key factor in getting the film from script into production because we ended up receiving so much support from the farm family in Van Buren, Maine, who helped us figure out how to pull off some incredible scenes within our budget. And that only comes from developing and fostering friendships over time.

Filmmaker: Can you tell us about the business plan for indie brand partnerships you worked on with the Harvard Business School and your deal with Terra potato chips?

Gaudet: We know Terra Chips will play a valuable role in the success of our film. Have you ever seen a serious teen indie drama promoted on bags of potato chips? You will when we release our film nationwide. And the marketing won’t just be in thousands of retail stores that Terra delivers to around the country, but on the chip bags served on JetBlue flights as well. Terra Blues just so happens to be the exclusive snack of the airline. In the end, what we have created is a value-added plan with our film allowing distributors to feel comfortable pushing the boundaries of the film’s release without jeopardizing their bottom line significantly. We hope this win-win-win strategy can be a roadmap for other independent films to have a greater impact and audience reach.

Pullapilly: Aron and I started working with a team from Harvard Business School two years ago, with one specific goal in mind. We wanted to create a space where independent filmmakers and distributors could work together to successfully release a film without taking on additional risks. We saw many independent films just kind of die in the marketplace following strong festival runs and good reviews. It seemed they were unable to find the right distribution partner to really get the film out there. The more we researched the business behind independent narrative films, we realized it was all really kind of screwed up, and more often than not, at least one major stakeholder would lose out on potential profits or opportunities from the release of the film. We wanted all of our partners to win on this project and we knew it was up to us to figure out how to accomplish that.

Our team developed a plan to reduce the risk of taking our film into the marketplace without compromising our artistic vision. We realized the importance of bringing a third partner into the equation, so the risk wasn’t all on the distributor. The key was finding the right partner that could help us reduce the P&A costs required to take a film successfully into the marketplace. Our mission was to identify a marketing partner that would be open to us retaining full creative control, shared a similar mission and purpose to some of the themes in our film, and had an overlapping consumer/independent film fan base. We found that partner in Terra Chips.