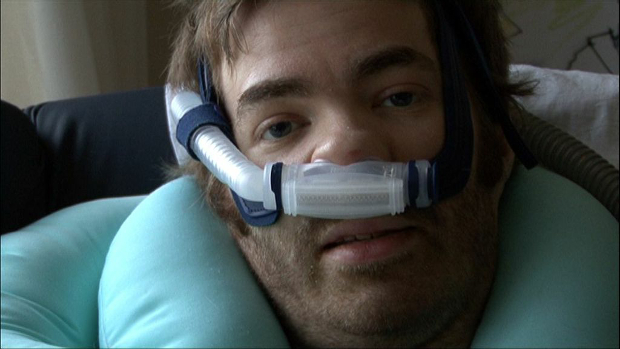 by Nadia Ismail
in Directors, Interviews
on Sep 6, 2013

A documentary that navigates the profound nature of a fatal diagnosis, I Am Breathing is full of spirit when it could just as easily rest on real life pathos. Neil Platt, a 34 year old diagnosed with motor neuron disease and now living out his final few months, is forced into new perspectives to combat his physical paralysis, speeding up his own understanding of the world to offer to his young son. The film does the opposite of dragging along morbidly — it elevates the viewer with Neil’s lightheartedness even as he moves towards an all-too-certain end. Filmmaker spoke with Morag McKinnon, a friend of Platt, who documented his last days, and her co-director Emma Davie about this inspiring story. I Am Breathing starts its US theatrical release today at the IFC Center in New York.

McKinnon: I was friends with Neil and [his wife] Louise when we all studied together at art school in Edinburgh in the early 1990s. Many years after that when Neil was diagnosed with MND he decided to keep in touch with friends and family with his blog. I had no real idea about MND/ALS but after visiting on a few occasions I began to understand. Neil wrote a blog entry putting out a call to do something to raise awareness: “anyone you know, anything you can do.” I immediately thought of my friend Emma, an experienced and sensitive documentary filmmaker.

Davie: Morag was a pal of Louise and Neil’s and a good friend of mine too and she had read a blog Neil had written about wanting someone to film what he was going through. She asked me to get involved but I was initially reluctant for many reasons. When I met Neil and Louise that changed, as he was so open and determined to communicate.

McKinnon: I am a fiction filmmaker and had no experience of documentary so therefore had no real intention of being involved. Finally after much deliberation, Emma said she would do it if I did. I had no idea at that time what the film might become, but felt we should try.

Filmmaker: What was it like trying to document Neil’s experience? What did you encounter emotionally and creatively in the process?

McKinnon: Initially I had trouble going from the role of friend to that of filmmaker. My impulse kept being to want to help as I had before, but I was kindly reminded and eventually well trained by Emma to think like a filmmaker. Each time we traveled to Harrogate to film, which is a journey of about four hours, we would talk about what we were going to do, what questions we might ask and how we could really document Neil’s experience. As we talked, we realized we wanted to try and get “under his skin,” try to give a sense of his experience and his point of view which made it more about seeing from his position than looking “at” him.

As we filmed, we found Neil’s need to communicate became stronger and more urgent. One time we arrived and Louise said, “Thank goodness you’re here. He’s on a mission.” And so he was. But what emerged was not just his desire to raise awareness about MND/ALS but a certain down-to-earth profundity. We realized that the blog would be essential to giving voice to Neil’s thoughts that were another mode of communication, which had a special power and intimacy.

I don’t know if I ever really managed to completely get over the fact that we were filming my friends. I never stopped seeing them as friends, but the questioning approach led by Emma meant that we were always inquiring rather than seeking conclusions and this I think meant that there was a space to bring ourselves and our perspective into the process. What did it mean to us? Why were we doing this? Even, difficult questions like: Is there a way of seeing this as not a tragedy?

There was no way of making this film without facing these and many other challenging questions. That was one of the biggest teachers for me.

That and Neil’s incredible spirit and how he dealt with his situation, with quiet pragmatism, bravery and humor. Even though his death was heart wrenchingly sad, he managed to leave something inspirational behind and that is an incredible legacy that I am grateful to him for.

Davie: The fact we could make it very much with Neil, using words from his blog is what made the film possible as it somehow empowered him. This is what also addressed ethical doubts I personally had about filming him at this stage. The process was many things: humbling, challenging, unexpectedly funny, a huge education creatively and emotionally trying to make something that remotely did justice to what Neil and Louise shared with us.

Filmmaker: In sharing Neil’s story, you’ve assisted him in two of his last wishes: to create a document of his life for his son, Oscar, and to spread awareness for motor neuron disease. What did that feel like to be part of something so intimate?

McKinnon: Neil and Louise invited us into their home and their lives with incredible honesty and generosity. Once filming had started, I think Neil in particular realized that this was a kind of “lifeline” to a future that he could not be part of and was possibly a kind of hope of something beyond himself. Neil had a phrase that he would use when anyone would succumb to emotion or pity; he would say, “man up.” It was his attitude that I think helped everyone around him man up. It was certainly an intimate situation but the tone was set by Neil and Louise’s bravery and courage with how they dealt with the situation.

Davie: I don’t think I can neatly sum this up. Neil challenged us to make this in order to raise awareness of the disease. Our own motives as filmmakers were to try to understand more about what it is to face death. There was so much within this — sadness, of course, was part of this but so was the amazing unfolding of Neil into a really extraordinary man who from this paralyzed position reached out to so many. He said, “I think the best of me is coming out in dying.” So even at that stage he was curious and generous. To witness this was a real privilege.

Filmmaker: In I Am Breathing, home movies are in conversation with documentary footage. Why did you decide to include these home movies in the film?

McKinnon: It was important for us that this was a film about life as much as it was a film about death. The home movie footage tells us about who Neil was before the illness, about an ordinary life full of so many of the things we can all relate to. It was important I think to know Neil as he was and to see the “freedoms” that he had before the disease took hold: the freedoms that we all have. The footage lets us know Neil and his life more intimately and we were very privileged that Neil and Louise gave us access to some incredibly intimate and personal footage that I think has given the film another dimension.

Davie: It was vital for us to make a film about life, not death. Including the home movies gave a sense of the texture of Neil’s life before the illness so we could enter more fully what he had lost but also understand the richness of a life lived to the full.

Filmmaker: What was your interaction as co-directors in the making of the documentary? Could you describe your approach as a creative team?

Davie: It was so necessary for Morag and I to have creative company, support and challenge in this journey. We shared so many questions, thoughts and musings about the film and what we were doing being present with a camera at this stage of Neil’s life. These questions fueled the process. I filmed, Morag did sound, then we tried to find a language for the film by editing bits ourselves. Eventually we collaborated with a Danish editor, Peter Winther, and an editing mentor, Janus Billeskov Jensen.

McKinnon: Emma and I have been friends for quite a few years and had talked about working together but I don’t think we ever anticipated something like this. I have been incredibly privileged to work beside Emma on this and she has been a great teacher and collaborator. I feel I have learned a huge amount from her. As a drama filmmaker, I came with a certain type of experience of filmmaking and although there are many interchangeable skills I think that the sense of inquiry required in documentary is something that is honed over time. It was Emma’s experience and integrity that led the way. We talked a lot all through the process, questioning each other, questioning what we were doing and what we were filming. It was a continual dialogue. Looking back, I think that it was important to share a journey that was often tough, emotional and challenging. I was and am very lucky to have a very wise friend and collaborator.