TIFF Critics Notebook: Artful Thrillers and Satisfying Biopics (Despite Themselves!) are All the Rage 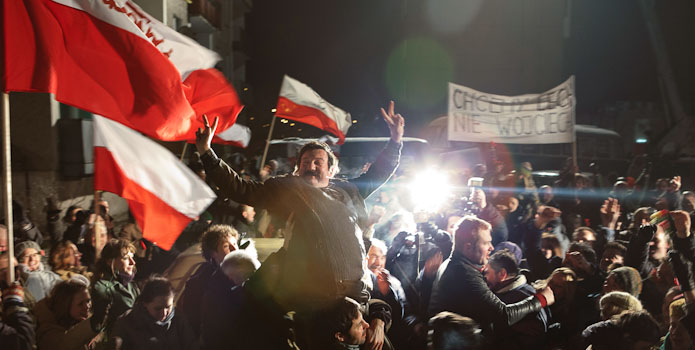 The 38th edition of the Toronto International Film Festival is well past its halfway point. The big red-carpet premieres are fading into the distance. As all the hoopla dies down, little-known indies from all over the globe are jockeying for much desired attention amidst the fest’s sprawling slate. A festival for all tastes, Toronto’s lineup features a smorgasbord of world and North American premieres, many of them more or less shared with Venice and Telluride, on top of a smattering of films from earlier in the circuit calendar, across every conceivable discipline of modern filmmaking. Acquisitions so far have been muted, save a pair of $7 million dollar deals for Once helmer John Carney’s Keira Knightley vehicle Can a Song Save Your Life? (to the Weinstein Company) and Jason Bateman’s directorial debut Bad Words (to Focus), both doubling the most expensive Toronto acquisition from last year, Derek Cianfrance’s A Place Beyond the Pines.

The two most fascinating films I’ve encountered among this year’s pool in Toronto are true-blue American indie thrillers, and when I use that generic genre description, I mean it in the fullest sense of the word for Jeremy Saulnier’s frequently brilliant revenge flick Blue Ruin and Zack Parker’s immaculately twisty and disturbing, Indiana-set Proxy. The latter film opens with a scene of shocking brutality: a pregnant woman is knocked over the head on a midwestern city street, dragged into an alley, and beaten about the stomach until blood pours from between her legs and her morbidly dented belly. This is far from the most violent thing in the movie, but fear not. Proxy then settles into a narrative of remarkable complexity and unquenchable queasiness involving the victimized, formerly pregnant woman, her fire engine red-haired lesbian lover (who has a penchant for wearing the same hoodies as her assailant), an eager and friendly suburban blonde she meets at her support group who may or may not be the mother of two missing children, and her husband, played by Joe Swanberg in what is easily the most menacing performance of his acting career, and who may or may not be keeping an awful secret locked up in his basement. 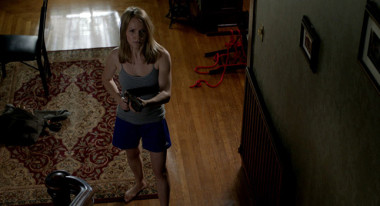 Set in the filmmaker’s hometown of Richmond, Proxy, which was acquired by IFC Midnight earlier today for an undisclosed sum, has a deliberately lugubrious pace that frequently lulls you into complacency as a viewer. This is a key part of Parker’s artfully deployed bag of tricks, instilling in the audience a false sense of safety about the film’s subject matter and its superficially wholesome-seeming characters. Meanwhile Parker employs an inspired, frequently symmetrical, Kubrick-on-a-budget aesthetic that expertly hints that this world is askew. Building upon the bravura visual elements in the director’s previous effort, the schematic but involving Margo Martindale starrer Scalene, this movie feels like the work of a director in total control of his vision, budget level be damned.

One sequence in particular, the picture’s shocking mid-film turning point, is shot and scored in a way that evokes the opening of Antichrist channeled through Psycho, all orchestral strings and super slo-mo. The cumulative and deeply unsettling effect of the film, one in which no characters are virtuous and everyone harbors terrifying secrets, is to evoke a barely concealed heart of darkness that has gripped this posh and leafy Midwestern hamlet. In its profane and often magnificent way, the movie does for Richmond, Indiana, what David Lynch’s Blue Velvet did for Lumberton, North Carolina. It contains multitudes. So much in fact, you’ll want to watch it twice despite its more than two-hour running time.

An already celebrated holdover from last spring’s Directors Fortnight in Cannes, Blue Ruin features Macon Blair, a childhood friend and collaborator of Saulnier’s, as a long-haired, car-living but oddly resourceful bum named Dwight. Scarred by the brutal murder of his parents at the hands of the jealous husband of Dwight’s father’s lover, he brims with barely concealed rage when he hears from a sympathetic local police officer that his parents’ murderer is being released from prison after 15 years. When Dwight brutally and somewhat clumsily stabs the man to death in the bathroom of a roadhouse, a cycle of recrimination begins, putting the remainder of Dwight’s estranged family in danger.

Undeniably handsome and at once both dryly ironic and kind of touching, Blue Ruin is a band apart and a cut above the universe of revenge flicks its synopsis might suggest. It’s coy about its intentions at first, setting up a frequently unexpected series of events deftly and doling out narrative information in just the right dollops to keep the audience rapt but uncomfortable with how the story e could possibly unfold, its tone expertly modulated to be suspenseful, humorous, earnestly grim in equal measures.

More interestingly, without trying to be so, Blue Ruin is an unconsciously thorough rebuke to the standard-issue revenge movie nihilism found in most entertainingly violent yarns about retribution. The men in it are clueless killers perhaps, but none are evil and no one is particularly right. These are wounded individuals who simply fail to value life, and the movie is perceptive to both the primacy and flimsiness of the motivations of its players. Blue Ruin sees this modern-day clan feud, being carried out by less-than-competent would-be assassins, as folly as much as it does tragedy. The film, like its at-turns prodigal and bumbling protagonist, finds the situation regrettable but unavoidable, a car wreck of desperate lives flinging themselves at each other in futility. The movie’s use of the color blue is enough to suggest the director/writer/cinematographer is an inspired visual stylist, but while Saulnier’s film is the more conventionally satisfying and beautifully rendered of the two, Parker’s is the more formally ambitious and ultimately unsettling. Regardless, these are tremendous leaps forward from two of the most exciting if previously undervalued talents in world of American independent filmmaking, low-budget thrillers that never feel like they’re straining against the resources at their disposal to tell memorable and haunting tales.