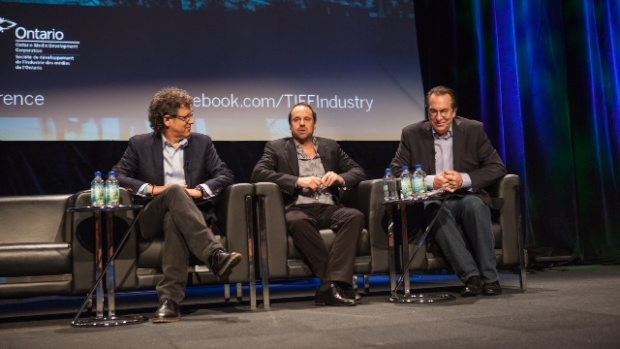 When he was 16 growing up in Montreal, Jeff Skoll saw Gandhi and it changed his world. “Here was a way of talking about an exemplary figure who touched the world and spread a message to millions of people.” Skoll would go on to build eBay, amass a fortune currently estimated at $4.5 billion, then use his wealth to launch Participant Media, a film company whose mission is to change the world through movies.

Skoll was the keynote speaker at TIFF’s industry series recently. He was in Toronto, where he studied business as a young man, to open the festival with Bill Condon’s The Fifth Estate. Dramatizing Wikileaks founder Julian Assange’s battle against western governments and his fight for freedom of speech, The Fifth Estate nicely illustrates Participant’s ethos of fomenting social change. And for once, a keynote address didn’t glorify a guest speaker (though there was some back-slapping), discuss the craft of filmmaking or talk about business.

“I always had a dream as a kid to tell stories that would get people interested in the big issues of the world,” Skoll told a packed theater in a rare public appearance. “I wasn’t quite sure how I was going to do that. I figured I better figure out a way to make a living first so that I could tell these stories.” After he made a killing at eBay, Skoll went to Los Angeles in 2004 to see if “anybody had thought of setting up a company that was strictly in the public interest and if there was any viability.”

Skoll met with actors, agents, directors and bankers who all said the same thing: The streets of Hollywood are littered with the corpses of people like you who think they can come to this town and make movies. So, Skoll asked them what they were most proud of in their careers. Invariably they talked about a project that dealt with an issue they cared about, like foster care, AIDS and women’s rights. Many had taken a salary cut just to complete these films. Skoll asked, “What if there was a company that made more of those kinds of films that you care about? Would you support it?”

Enough people, including Warner Brothers, said yes to encourage Skoll to move to L.A. the next year. The first Participant movies proved that films with a social agenda could reach audiences and attract critical acclaim: Goodnight and Good Luck, Syriana, North Country and the documentary, Murderball. “Looking back on it now,” recalled Skoll, “it feels pretty naïve to have gone down there to hope to have achieved the success we’ve had — not just the awards, but in making a real difference in the big issues of the world.”

Participant would enjoy later film success with An Inconvenient Truth, The Help and Lincoln, but its TV division languished until the recent launch of Pivot, born out of two other channels Skoll bought, Documentary and Halogen. Like Participant, Pivot will show content that encourages social change. Skoll admitted that cracking the TV industry has been tough, but he’s bankrolling the risky venture because he sees money as a tool and not a goal: “Film as an industry is tiny. Worldwide with TV and DVD and movies it’s about a $100 billion industry. People will do a $100 billion of transactions on eBay this year. That’s one company in the tech sector. Yet, the effect of this industry – the effect of you guys and you stories,” he told the audience of filmmakers, “is so powerful.”