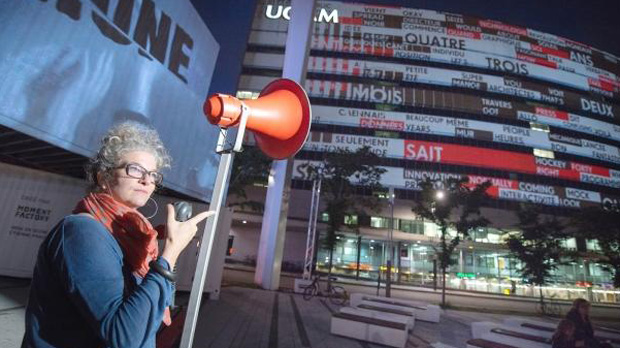 by Randy Astle
in Directors, Filmmaking, Interviews, Transmedia
on Oct 4, 2013

Mégaphone, an interactive project currently running in Montreal, is designed for a world that’s forgetting that the word social doesn’t necessarily have to precede media. The project seeks to remove the fiber optic interface that currently connects so many of us and move public discourse back into a public space–that is, somewhere outdoors with plenty of foot traffic. Thus it’s built around a pre-Industrial Era public speaking model like Hyde Park’s Speaker’s Corner in London: anyone can take to the mic to discuss any topic they like (though there is an MC and suggested time slots for certain subjects to help guide the discussion). But it’s far from low-tech: the project, developed under chief creators Alexandre Lupien, Technology Director at Moment Factory in Montreal, and independent artist Etienne Paquette, uses state-of-the-art voice-recognition software to transcribe speakers’ words and project them onto the multistory façade of a nearby building; a video component complements the written word. The result: an engaging visual artwork but also a progressively reactionary step in public discourse: by attaching a human face to a stated opinion it eliminates the anonymity of Internet discussion boards and, hopefully, elevates the level of the conversation, not just in terms of quality of thought but of human connection as well.

A video on the making of Mégaphone can be seen here, while another showing Mégaphone at work is here. The comments below were composed jointly by Lupien and Paquette.

Filmmaker: Can you describe Mégaphone?

Lupien & Paquette: Mégaphone is an art installation about reappropriating public space through speech; it gives everyone an opportunity to join in on the discussion. As participants speak, their voices are transformed, in real time, into images projected onto the façade of the University of Quebec in Montreal (UQAM), leaving their visual “footprint” on the urban landscape. It has three zones:

1. A square bordered by animated containers where anyone can speak out using a megaphone;

2. The façade of UQAM’s President Kennedy building, with projections of visual effects generated by voice recognition;

3. A “speakers’ walk” which uses a special audio-visual setup to showcase seven key figures who have shaped public space in Montreal with their words.

Filmmaker: How did it come about?

Lupien & Paquette: The National Film Board of Canada and the Quartier des spectacles launched a call for applications last year. They were asking for an installation that would talk about the reconciliation between the individual and the collective. We created a team at Moment Factory to start brainstorming about ideas. Quickly, we arrived at the conclusion that we wanted to propose an installation about public speech. We wanted to offer citizens or passersby an occasion to speak in public in downtown Montreal with interactive and multimedia effects and using a voice recognition system. Mégaphone was created as a mouthpiece to let Montrealers’ voices be heard, loud and clear. Inspired by the city’s early 20th-century history of popular assemblies as well as the 19th-century British tradition of the Speaker’s Corner, the installation gives everyone a chance to speak out and air their concerns.

Filmmaker: What was your working relationship with the NFB like after your initial acceptance for the contest, just one of funding/support or more extensive involvement? What are the advantages and pitfalls of a public-private collaboration like this?

Lupien & Paquette: Mégaphone is a collaborative project between the NFB, the Quartier des spectacles, and Moment Factory. The NFB and the QDS were the producers; Moment Factory the creators. So the NFB and the QDS were not only funders. Hugues Sweeney at the NFB and Pascal Lefebvre at the QDS were involved in the creative process, giving opinions and insights about the direction we wanted to take. It was a great collaboration, very dynamic, very creative. The three of us agree about the fact that we want to work together again in the future.

In terms of advantages, I can think of two. First of all, when you work with the NFB you’re part of a tradition of technical innovation (direct cinema, IMAX, etc.), and that’s evident in their openness to digital projects and new ways of telling stories and seizing moments in them. There’s a real creative mindset. And you know you’ll be contributing to engagé content, social issues, going beyond individuality and entertainment to allow voices that are too often silent to be heard.

With the Quartier des spectacles, there’s the advantage of a fertile playground that gives free rein to creative exploration. These are public spaces visited by lots of Montrealers and tourists alike, and that have the leading-edge technological infrastructure to host daring projects.

A third advantage—which might at first seem like a pitfall—was that everyone at Moment Factory, the NFB, and the Quartier des spectacles had to adapt and stretch beyond their usual working methods to create a powerful experience of freedom like no other.

Filmmaker: Can you talk a bit about the voice-recognition software?

Lupien & Paquette: The speaker’s words are transferred to a voice-recognition system developed by the Computer Research institute of Montreal (CRIM) and specially adapted for Mégaphone. A transcription of the words is then used to enhance the visual space as well as feed the database that informs the video content being projected when the megaphone is not in use. This effectively reflects what has been said while providing an overall picture of the sound clips that have been stored. Speech recognition is a new interface. We saw mouse, keyboard, movement detection more recently with the Microsoft Kinect and now we are at a point where speech recognition is more and more in our lives. We think that this new interface will really be more present because talking is such a natural way of communicating and interacting. Working with new technologies like that is for us a great creative challenge. We have to know well the limits of those to really embrace our imagination. It is important to know and work between those boundaries. This is where magic happens.

Lupien & Paquette: Working with the CRIM was a really great experience. They have a great experience and they are renowned across the world for the performance of their speech recognition software in free speech situations. Most of the speech recognition softwares that we are experimenting with these days are well made to interface between humans and computers, but the CRIM software, on the other hand, is at its best for human-human interaction. For example, their tool is used for trials, commission inquiries, interviews, etc. This situation (free speech) is much more difficult to transcribe because there are much more nuances and rhythm in the voice than when someone is talking to a machine. In that way, their software was really well suited for our installation. We didn’t want people to talk to the projection: we want them to talk to each other. Then the speech recognition system is there to make an echo of the speech and of the event. They really worked hard to fine tune a system that they have been developing for about ten years in order to fit the purpose of our installation.

Filmmaker: Moment Factory has also been making multimedia installations in public spaces for over a decade. How was Mégaphone different from — or more challenging than — what you’ve done before?

Lupien & Paquette: When Moment Factory was founded in 2001, we were mainly creating multimedia experiences for events. Later in our evolution we started creating permanent and urban installations : we created a multimedia façade in Atlanta as well as various sound and light shows on the Ottawa Parliament, on the Atlantic City Boardwalk Hall and on the Sagrada Familia in Barcelona. We also created various installations at the Quartier des specatcles (for La Vitrine culturelle, Metropolis and Club Soda, as well as a sound and light show called Elixir, where we projected on the water of the fountain). More recently, we created four hours of multimedia and interactive content for the new Tom Bradley International Terminal at the Los Angeles International Airport. Our motto is “We Do It In Public.” Our mission is to use technology to give people a reason to reinvest in public places. Our experiences can be atmospheric, immersive, participative or interactive. Mégaphone is an interactive urban installation. All interactive projects are by essence a challenge: depending on the technology we use, people will react differently and we’ll have to adapt the installation. The voice recognition system is a new technology, still imperfect, and it was a real creative challenge all along the process. Many new and different technologies were involved to create this installation.

Filmmaker: What kind of response has it had so far?

Lupien & Paquette: Have a look at the schedule. There are a lot of groups who have reserved some slots to talk about various topics. There is a great variety of people showing up every night: students, new immigrants, people from the area, visitors, curious folks. There is also a Master of Ceremony every night who is there to invite everyone to use the megaphone and to encourage a dialogue. We’ve seen various reactions: a rapper from Toronto who tried our megaphone and thought Montreal was really cool to offer such a tribune, a lady who was new to Montreal who said she was fond of a guy in front of her (she basically made a declaration), people sharing their ideas for Montreal — how we can make the city a better place to live in. Sometimes people are shy, but when they dare taking the mic we can feel a nice emotion and also how proud they are of having broken the wall of silence afterwards.

Filmmaker: Are there any plans — or hopes — to take something like this into other cities?

Lupien & Paquette: The NFB and QDS are looking into opportunities to see Mégaphone travel. We’d love that! We could think about Mégaphone being adapted to the realities in Toronto, New York, Paris, London, or cities in Asia. We believe everyone in every city can benefit from a multimedia speaker’s corner. And we know that most of the cities are looking today for new ways to bring life to their streets and public spaces — Mégaphone was designed to achieve exactly that.