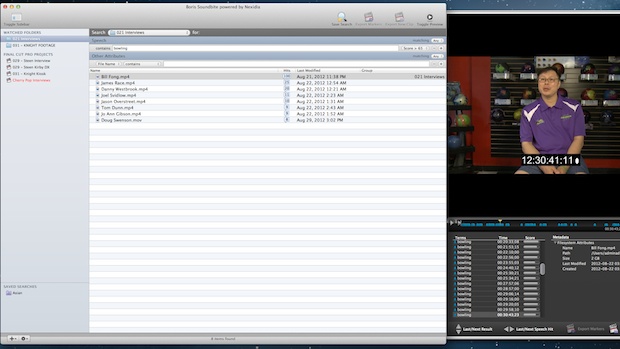 by Joey Daoud
in Filmmaking, Post-Production
on Oct 10, 2013

Boris Soundbite is a handy tool that scans the audio in your media files and lets you search for words or phrases. Useful for documentary filmmakers, supercut editors, and anyone needing to search an archive of media. Best of all – it actually works.

This is an idea that’s been around for a while. I was skeptical at first as I’ve tried other solutions like this before with less than favorable results (like Premiere’s transcribe feature), but where Soundbite succeeds is it only returns hits for a search, not a verbatim transcription. It matches the audio based on words or phrases you search for using Nexidia’s dialogue search technology, and returns results based on a probability threshold you designate.

I gave the software a spin on a few real-world editing projects, primarily documentaries (Boris provided a free license to test the software). The latest version of Soundbite, version 2.1, includes integration with FCPX. It also includes support for FCP7 and export to Adobe Premiere.

The interface is simple. You can either import watch folders, so any media in a folder is automatically indexed for searching, or you can import the XML from a FCPX Event or FCP7 project file (I only tested Soundbite with FCPX. Anything I write about FCP7 is only based on documentation and not actual use.)

Importing a FCPX Event is a one way route. If you add media to the Event after indexing with Soundbite, you’d need to reimport or create a new Event and import.

Once you’ve got your media loaded and the indexing is done you’re ready to go. You can search through all the media you have indexed or specify a specific project or folder.

You can search for a word or phrase and add multiple search boxes, essentially adding the operator OR, as it will return a clip that has either phrase.

Once you run the search a list of files will pop up with the number of hits it has of all your search phrases. Double click and a video preview pops up of the clip with a list of every result it found of your search. If you searched for multiple words or phrases, each phrase is marked by a different color. Just click on a marker and listen to the result.

This is when you start mouthing “holy crap” as click after click you keep hearing your search phrase. Each marker has score of how likely it’s a match, but it’s usually very accurate or understandable as to why you got a false positive.

If you were just looking for a very specific moment you could note the timecode and find the corresponding section in your project. If you want to import these results into your project you can select the clips you want and export them as XML for FCPX, FCP7, or Premiere. Once you import them the markers are maintained with the media, along with a note as to what word or phrase each marker represents.

That’s Soundbite in a nutshell and it does one thing really, really well. But here’s some hiccups I found in real world use.

First off, this is not a substitute for transcription or reviewing all your footage. Soundbite doesn’t transcribe or give you a text export of your files. So you couldn’t use this in the early stages of a cut to make a paper edit or read a transcript of an interview.

It works really well towards the end of a cut, when you’re searching for a very specific moment or phrase. Even if you have a transcript it’s way faster with Soundbite to run a search and click on each marker to instantly go right to the line and hear how it sounds.

Working with FCPX there are some issues. Working with DSLRs, when I do an interview I usually have two cameras and a separate sound recorder, which I sync together in a multicam clip or compound clip. Soundbite can’t read multicam or compound clips, it will import everything as a separate element, which means two camera angles and a sound file all with the same audio. This would give me three files when I run a search with the exact same results. Exporting isn’t an option anymore because I want to be working with my multicam clips. So I’d have to find the timecode on one of the files, figure out the offset if it’s not in sync with the multicam or compound clip, and then find the moment I want.

Boris says this is a limitation of Nexidia’s search technology and they’re discussing with them to be able to handle multicam and compound clips.

If I was working on a larger project I would just export the multicam version of the interview and import that into Soundbite, so at least the timecode would match and I’d have the best quality audio in sync with the video.

After exporting the XML to bring into FCPX, FCPX will create a new Event with the selected files and the applied markers. One issue I found is that if I was searching in an imported FCPX Event file and exported from there, the media would not import into FCPX. It would just create an empty Event.

However if I exported from a folder I had indexed in Soundbite, not associated with a FCPX Event, that would import fine with all the media and markers.

Those were the biggest issues I had and you could categorize them as import/export issues with FCPX, which I’m not too surprised about. But Soundbite itself performed excellently.

Outside of doc cutting, this would be a lifesaver for anyone looking to create a supercut. Just feed it all of your source material and browse all the hits.

This would also be useful for anyone that maintains an archive of footage or shows that they occasionally need to dig back into. You essentially have your own searchable database at a fraction of what it would cost to have them transcribed.

At $295, the cost is a little steep for a piece of software that only performs one task, but it does that task extremely well. You’d really need to assess the type of work you handle and how much time this could potentially save you. For some it could only be a couple of minutes, but for others it could be hours.