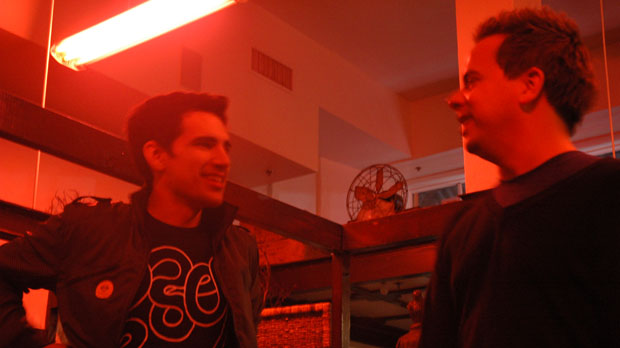 In September, LA Game Space finally loosed Experimental Game Pack 01 upon the world. Fifteen bucks to Kickstarter, and you’ll find yourself in possession of 23 strange, disturbing, funny, moving, sad and psychedelic games from some of the world’s best and most promising indie designers.

Back-story: It’s 2008. Two guys meet at a conference. The guys are Daniel Rehn and Adam Robezzoli. They’re thinking, you know what the indie game world could use? A space. A real-world physical location for exhibits and events, a speaker series, a research lab and an artist residency. Institutions such as the Museum of the Moving Image in New York have begun videogame collections. Schools like the NYU Game Center are producing serious scholarly research. Indie jams and festivals showcase work — but what about a place that offered all of this with an artist residency to boot?

“If we don’t limit what they can be, and we take seriously their cultural importance, what would a space for games look like?” said Jeremy Douglass, a researcher in Software Studies at University of California Santa Barbara and one of the LA Game Space organizers.

Cut to fall 2012 and Rehn and Robezzoli are raising $250,000 on Kickstarter. (They’re committed to avoiding corporate sponsors.) The reward for making a donation: receiving Experimental Game Pack 01.

The space was supposed to open in March but didn’t. It’s an any-day-now situation, which has Robezzoli and Rehn tight-lipped. (“Too much press without the ribbon cutting can lead to a heavy community backlash,” Douglass said, which, I’d imagine, is probably an understatement.)

So a quick rumination on why people are so excited:

Of course, there’s the ongoing battle for cultural legitimacy, but I find that conversation so boring that I’m going to skip it. Instead, I just want to say how struck I’ve been by the collaborative spirit of the indie game world. There are, of course, examples of the lone-wolf, tortured-artist model out there, but for the most part, the people I know in this scene seem to all be involved in at least seven or eight different collaborations with different groups of people at all times. Whenever I go to Indiecade, the biggest indie game festival, I find myself feeling almost as if I were at a rave, there’s so much love in the air. I think John Sharp, Parsons game-design professor and member of game collective Local No. 12, summed it up nicely at a recent talk at the Museum of the Moving Image, when he compared the indie and experimental game scene today to the early days of punk rock. Ethos: We’re all in it together. Which seems to me what the LA Game Space is trying embody.

Let’s start with Takahashi, since he’s the most famous of the group. (People forget the whimsical, brilliant and best-selling Katamari was first seen in the U.S. at the Experimental Gameplay Workshop at the 2004 Game Developers Conference.) For the pack, Takahashi, working with Adam Saltsman, made ALPHABET, which asks you to race cute, colorful letters across the screen in what becomes a laugh-out-loud game of twister for your fingers. It’s fast and charming and more than anything else, it’s an experiment in controls — traditional computer games use four letters and the up and down keys, whereas this game asks you to use all the letters on your keyboard. I recommend this game. I recommend it to your children. I recommend it to your grandparents.

I don’t suggest all the games in the pack for either children or the elderly. Tamas Kemenczy’s Coureur des Bois, which means “runner of the woods” and refers to French Canadian woodsmen who trafficked in furs (and please don’t ask me exactly what that has to do with the game), is as disturbing as David Lynch at his best. It’s black and white, scratchy looking, like someone with only the crudest skills carved it as a lithograph. You play as a canoe making its way on a furiously moving, twisting stream with wolfs running along the side, sometimes catching you and spiraling you into a horrible rotating dance. The controls seem barely to do anything. I had no idea if I was actually controlling my canoe or if I was being controlled by the wolves. Uneasy is a gentle way to describe how I felt.

As one blogger wrote: “I think I slipped into another dimension … ruled by mind-controlling aliens.”

“By the standards of an arcade game, it’s terrible,” Jeremy Douglass said. “The controls are mushy and brutally unforgiving — but it’s not about that. It’s not about getting to a level. It’s about immersing yourself in a situation. It gets at questions like what is a game anyway? And what are games for?”

CONTROL from Kieran Nolan was so maddening I quit even trying to play after 15 minutes. Douglass had an interesting comment about that. “Really, the game is about the history of interface design,” he said. “You’re sitting there thinking, what am I missing? But we all were at some point trying to figure out how the Atari 2600 or some other computer worked. It’s about that feeling.”

As Douglass said, CONTROL is not the game for you if you’re looking for “a pleasurable experience.”

But that’s what’s interesting and worthwhile about Experimental Game Pack 01. They’re experiments. Some of them fail, which is part of what experimentation is all about. Some of them are statements about games rather than actual games you’d want to play. Some of them are delightful little poems of games — gone in a flash but leaving a flutter of emotion in your chest. (To My Favorite Sinner comes to mind.) But they make you think. And to me, that’s a good thing.