Bastards — A Hammer To Nail Review 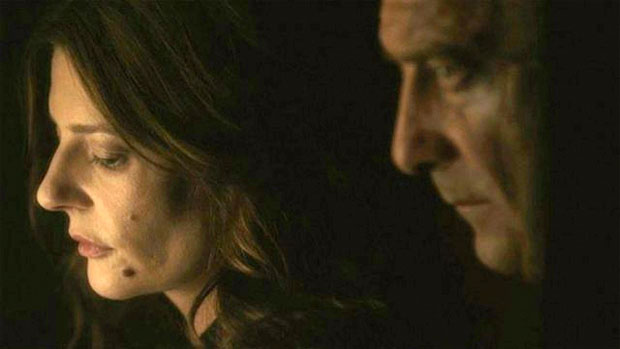 (Bastards is being released theatrically on Wednesday, October 23, 2013 and on iTunes and VOD two days later, through Sundance Selects. It world premiered at the 2013 Cannes Film Festival.)

Arguably the most muscular of contemporary cineastes, Claire Denis engineers some of the richest filmic experiences that viewers can treat themselves to — or punish themselves with. Denis’ work contains soothing and unsettling multitudes, but for the sake of making heads or tails of her latest feature, Bastards, let’s posit that throughout her career she has generally alternated between two modes: one is mellow, sensual, drift-like and attuned to the almost alchemical expressivities of objects, textures and sounds; the other is bruising, gruff and pervaded by an indomitable sense of dread. Her previous film, 2009’s White Material, was unmistakably a work in this latter gear, a politically charged Africa-set workout that found Isabelle Huppert’s coffee plantation owner and her tattooed oaf of a son wandering as if in a trance toward fatal just-desserts. Bastards extends Denis’ concern with the symbolic follies of mildly extraordinary people who are incapable of grasping the hopelessness of their respective situations. It’s a jigsaw puzzle of a film that goes out of its own way to punch you in the jaw when you least expect it to.

Mystery abounds from the achronological get-go, as we hear police sirens and see a white sheet covering the corpse of a central character to whom we’ve yet to be introduced. We then see Justine (Lola Créton) wandering through nocturnal Parisian back-alleys wearing only stilettos and an air of PTSD. These head-scratching sequences set the table for much confusion and suspense to come. Stoic sailor Marco (Vincent Lindon) abandons the ship on which he works in order to return to Paris, but his motivation for doing so is again withheld. He moves into a bare apartment above Raphaëlle (Chiara Mastroiani), the lonesome wife of smarmy businessman Edouard (Michel Subor, turning in an admirably repulsive performance), and their young son. Marco rapidly initiates an affair with Raphaëlle, but their connection is brutally turned on its head when Marco’s agenda is slowly illumined following a hospital visit to Justine and a subsequent game of cat-and-mouse with a barn-owning pimp (Grégoire Colin). A late night joy ride bathed in near-total darkness toward film’s end serves as a model for Denis’ overall approach to storytelling: the crash is inevitable, but the route we take to get there is breathless, dangerous and nerve-wracking.

There are numerous ways in which Bastards resists comparison to anything else Denis has done before, despite the welcome presence of nearly all of her repertory and a typically hypnotic Tindersticks score. Longtime Denis d.p. Agnès Godard serves as trigger-woman for the director’s first dance with digital cinematography, and the results may seem rather dreary and clinical at the outset, but as the sun sets it becomes apparent that nighttime is the right time. Bastards features some of the most immersive and barely-visible imagery this side of Philippe Grandrieux, yielding a film that is, in a sense, more noir than noir. Shrouded in a seemingly constant and foreboding obscurity, the film is far more interested in visually playing with concepts of elision and concealment than in adhering to the strong causality and fatalism of the noir. What Denis does borrow from that tradition is a sense of forward momentum, which she successfully incorporates without abandoning her usual audiovisual poetry.

Noir or not, Bastards is probably the first film in Denis’ filmography that can be readily characterized as a genre picture — which genre exactly will likely serve as an object of debate for a long time to come. The film is truthfully a spiritual descendant of Alfred Hitchcock’s mean-spirited, blackly comic and artistically self-assured end-of-career work. Like that particular iteration of Hitchcock, Denis presents her material with the easy confidence of a master who cares about no one but herself (and I mean that as high praise). Some are referring to Bastards as a mere exercise for her, but if that is the case, it is a profitable one indeed.