Producing a Low-Budget Short Film and Pitching a Movie: Run Like Hell 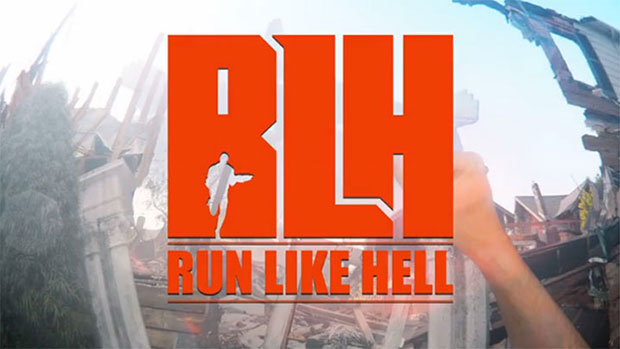 Red Giant has unveiled their latest low-budget, effects-rich short; Run Like Hell. It’s billed as a short film, but it’s really intended to be a teaser for a full-length movie director Stu Maschwitz hopes to make. Maschwitz is a visual effects wizard who worked at Industrial Light & Magic before co-founding effects house The Orphanage. He is also the author of The DV Rebels Guide, but that doesn’t mean Hollywood is beating down his door to make a movie.

Meanwhile, Red Giant, the makers and sellers of products such as Colorista, Magic Bullet and BulletProof, have been pursuing an interesting strategy for marketing their tools; they hire filmmakers to make shorts movies that also demonstrate their tools. They’ve had a successful partnership with Seth Worley, who has created several highly entertaining shorts. These have been notable for their low-cost, their relatively high production values, and most of all, for being funny and engaging.

Since Maschwitz happens to also be Creative Director at Red Giant and the designer of several of their products, it probably shouldn’t be a surprise that when Aharon Rabinowitz, Director of Communities for Red Giant and Executive Producer at Red Giant Films heard that Maschwitz had a script for a film he was trying to get made, he suggested they create a short film both to promote the idea of the movie and as a demonstration of their software.

Run Like Hell continues in the pattern of their earlier shorts with two notable differences: it was shot using the GoPro Hero camera, and the majority of the movie is one continuous shot. 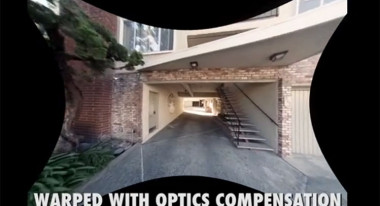 Unwarping the image with the Optics Compensation Effect

In the short, the lead character walks down the street reading from a piece of paper containing the speech that he’s going to give to a woman he’s had a long-time crush on. As he walks, he’s virtually oblivious to strange shadows, the sounds of sirens, disappearing cars, and jet fighters flying overhead. Clearly something big is going on, and he’s missing it.

As Rabinowitz explains in the Behind The Scenes video, the GoPro camera was chosen because the film is shot with a first-person POV, and it’s wide-angle footage fits that experience. It probably doesn’t hurt that the camera is easy to head mount and still move realistically. Maschwitz actually played the part and wore the GoPro for most of the video (though a stunt-double basketball was used for one shot.)

Like all of Red Giant’s movies, Run Like Hell is a tribute to budget VFX work, and the Behind The Scenes video explains the tools used to accomplish it, even if they don’t really explain how to actually do it (Red Giant often adds tutorial movies that explain techniques in detail, so stay tuned.) 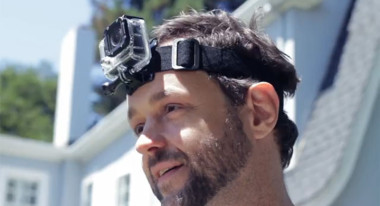 This was a low-budget effort, but not a no-budget one. They bought the spaceship and aircraft models online from TurboSquid  and VideoCopilot Jetstrike. Detonation Films created custom debris elements to enhance the explosion, and the final alien spaceship 3D model was created by effects house Atomic Fiction.

But most of the rest of the effects were accomplished using After Effects, Photoshop and a few add-on tools.

Because the GoPro footage is heavily distorted by its wide angle lens, one of the biggest visual effects challenges was the compositing of the VFX elements on the GoPro footage. Maschwitz developed a workflow in After Effects that involved unwarping the image with the Optics Compensation Effect, creating a matching 3D camera using the Camera Tracker and warping the composited elements to match the original footage.

The last shot of the film is almost entirely CGI and includes a deconstructed house created in Photoshop and After Effects, third-party visual elements, and the 3D alien spaceship model. A lens flare was also added that emulates the one seen in the earlier GoPro footage. The picture was edited in Premiere Pro and then exported to After Effects where the compositing was performed. Color grading was done in Colorista and Ben Worley created the music.

Whether the Run Like Hell short results in a full length movie or not, it should serve to inspire filmmakers on a budget; if you have the imagination, there are tools available that will let you do almost anything.