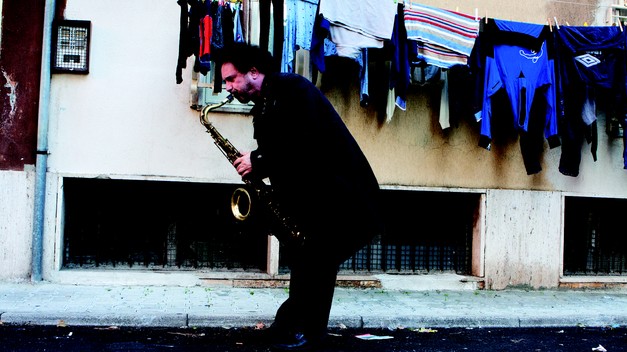 by Brandon Harris
in Director Interviews, Directors, Interviews
on Oct 25, 2013

Italian jazz saxophonist and composer Enzo Avitabile might not be a household name in the States, but in the annals of world music he’s quite a fixture. In his native Naples he is so famous that when he visits the neighborhood of his youth, folks bustle into the streets and onto rooftops and balconies to lay eyes on him. A scholar of jazz, he can hold court on the evolution of the form as long as you’d like him to, although as Academy Award-winning director Jonathan Demme discovers in his newest concert film, Enzo Avitabile Music Life, that may not stop the 58 Neapolitan wunderkind from breaking out into song or tune, depending on the circumstances. Demme, whose storied career as a narrative filmmaker has taken a strong turn toward documentary in the 21st century, delivers one of his most evocative performance films yet, a movie that will rest comfortably alongside classics such as Stop Making Sense and his trio of Neil Young films.

The heart of the film is the recording of a new album live in a baroque church. It’s a genre-bending mix joining Avitabile with a dazzling lineup of supporting players and guest turns, including Eliades Ochoa, Naseer Shamma, Gerardo Nunez, Ashraf Sharif Khan Poonchwala, Trilok Gurtu, Luigi Lai, Zi Giannino Del Sorbo, Amal Murkus, Djivan Gasparyan Trio, Hossein Alizadeh, Daby Toure and Bruno Canino. He interweaves the performances with Avitabile talking in his office or milling about his native city, derelict slums and arresting street performers at every turn, the fast-talking, fuzzy-haired musician giving context to almost everything they encounter. As soon as he plops into a vehicle early in the film and hands the driver a Maestro Pergolesi disc, you’re more or less as hooked on him as Demme clearly is. 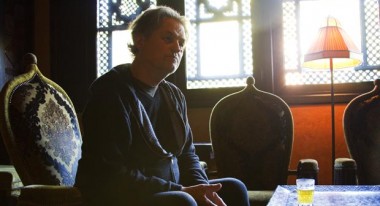 Filmmaker: You’ve made a tremendous number of music documentaries. What about Enzo made you feel like he’d be a welcome addition to your collection of musician profiles?

Demme: I’ve loved his music for several years now. I heard him on NPR one night and was blown away by the originality and energy and emotion of his music. I got a bunch of CDs and played them all the time. I found myself in Naples a couple years ago at a film festival, and I was asking about [his music] and the organizers of the festival surprised me by introducing me to him. I don’t speak Italian or Neapolitan and he doesn’t speak very good English but we hung out for awhile and I was able to express how much I loved his music. He was very appreciative and so in the back of my head I started to think he’d compose an extraordinary score for a fiction film, and I was glad I was meeting him. Maybe this will turn into something, [I thought].

A short time later I got a call from the director of the film festival and he said he’d talked to RAI television and if I wanted to make a film about Enzo they’d pay for it. I couldn’t turn that down! [laughs] It offered me a unique opportunity. I adore documentary filmmaking. I adore capturing music on film. The idea of going to Naples and spending a week with this guy, who I knew nothing about, trying to figure out who the heck is he, I couldn’t say no. I trusted that this week spent with him would result in a film very much worth seeing. He’s a imminently interesting subject for a portrait film, and his music would, given that he was going to invite his favorite musicians from around the world to join him in collaborations, would “look good” [on film]. It was a given we’d be working with his sound team. We lined up a terrific cameraman, also named Enzo, and I brought a cameraman to be second camera named Charlie Libbon ,who I’ve worked with on the Neil Young films and other documentaries. We went and shot, shot, shot, shot, shot the whole time.

Filmmaker: How about the post-production? Did you treat it any differently than your previous films?

Demme: This terrific Italian editor, Jojo Franchini, did the first cut. I had a meeting with him and he wanted to know what I had in mind and what notes I had for him. I said, “You’ve being seeing the footage, do you have a way you’d like to attack it?” He said, “Yes, I do.” I’ve always liked for the editor to take the first crack at things so I left Jojo. He spent six to eight weeks cutting and then he came to New York with his cut. It was wonderful. I was thrilled to see that he trusted the songs enough to let them play by and large in their entirety. I was afraid because this is not exactly a concert film and it’s not exactly a performance film that we would have to truncate the songs to a certain extent. That’s something I personally don’t like at all. I was thrilled that Jojo trusted the complete songs enough to hang with them, and what we ended up with was a performance film disguised as a little bit of a travelogue with a little bit of a portrait film. I’ve never seen anything like this before and I really love it.

Filmmaker: Did it take some time to establish a rapport with Enzo? With only one week to shoot you clearly didn’t have that much time.

Demme: I’m an easy read when I go some place to film. I’m incredibly enthusiastic, really excited to be there, can’t wait to get going. He could see that. He had done his research on me, had confidence in me, he knew how much I adored his music. He knew I wanted his music, his Naples, his self-description. He knew I wasn’t going to come in with a bunch of questions, he knew it wasn’t going to be in-depth portraiture. It was supposed to be this privileged visit with this guy. We’re going to visit him at his home and see what that’s like. We’re going to go to places he deems interesting. I’ve done a number of these portrait films now: I did one with Jimmy Carter, I did one with my cousin who was a radical priest in Harlem in the ’90s, and I did one in New Orleans with a woman living there after Katrina.

Demme: Yes, Carolyn Parker! Well these people I’m doing portraitures of, in all these various situations, let’s face it, they’re the auteurs. They ought to be the auteurs of their films. I don’t want to go in there with a million questions and turn it into a formulaic thing where I find something interesting and then I’m like, “Oh let’s dig deeper here.” I prefer to let it flow and stand there grinning and encouraging. I was tripped out with everything I saw this guy do. I loved his spontaneity. I had confidence in him and he had it in me.

Filmmaker: Was there material you were really fond of that you may have had to do away with because of time constraints or other external factors?

Demme: No. There were two songs that were really good but they were reminiscent of better songs like them. So we excluded two songs that will likely end up on the DVD because I wanted everything to be special. I wanted to show every facet of this diamond and not let it get too familiar. In Jojo’s cut we run out of gas because this is a lot like this other song we heard.

Filmmaker: What was Enzo’s reaction to the film when he first saw it?

Demme: He was really moved. He loves this film. He was just like, “Thank you.” We were at the Venice Film Festival together last year. He feels like it captures what he would want to have captured about his life. He talks about the loss of his wife very briefly in the film. That’s the only time one knew that he had lost his wife very young to cancer. The subject came up when we were visiting his apartment as a reference to the spiritual challenge he went through when she died. I had the choice there where I could have said, “Can you talk more about Maria, her death and what that was like. Yet because that wasn’t forthcoming from him, I didn’t feel it was appropriate for me to veer him into that. That is one of the things that makes him happiest about the film — we try to pay cinematic tribute to Maria. The film sort of stops and basks in a few images of her and the harbor and then it moves on. He was so grateful for that, he loved that there was an homage to her. It’s something to this day that really pains him to talk about, and he was glad that he didn’t have to dredge that up. He loves his own music as well he should I think. He’s very proud of his collaborations with these artists from all over the world, and he saw how wonderfully it was filmed, so he is very keen on the film. He’s on the verge of hip replacement so he couldn’t come to the New York premiere of the film.

Filmmaker: Was that his idea to go back to his old neighborhood and film himself performing among the people there? It’s a really magical moment in the picture.

Demme: That was absolutely his idea! It was clear that we needed a huge musical component. He sent me a list of a dozen people and he asked, “Which of these people would interest you” I was like, “All of them!” So the solution for getting all these people on camera with him was that Enzo and his manager would record an album in that space and we would film them. I thought it was vital for it to be a portrait of Enzo’s Naples so I wanted him to decide where he wanted to take us. He wanted to go to Marianella, and he wanted to go to the Conservatory. He wanted to show us how he escaped the relatively hardscrabble circumstances of his youth. He felt these were important things in his self-description. This film is a journey excavating his past and the places he’s been. Going to Marianella was incredible. All these people turned out in the streets. Word had gone out through Enzo’s friends that he was coming back that day, but nothing was planned. My wish list included having him play saxophone in the street, which ultimately happened — we got mobbed by all his old friends and it was incredible. We went through that courtyard. That extraordinary lady came down. She was so rich in character. I thought to myself, I finally get to make a Fellini movie. He lead the way. He figured out where we would go. He’s the auteur.