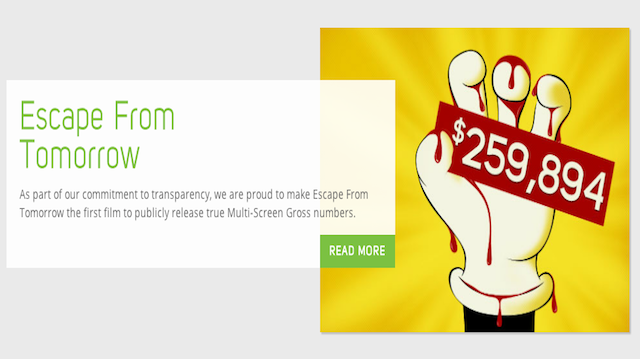 by Sarah Salovaara
in Distribution, Filmmaking
on Oct 28, 2013

As the first in what is to become a weekly, unprecedented occurrence, Cinetic Media released the VOD and theatrical gross of Escape From Tomorrow over at its sister site, Film Buff. Utilizing the Producers Distribution Agency catalogue, John Sloss and company will post an aggregate number every Monday that represents revenues from the divergent platforms, before hopefully moving on to films outside their network. “We call upon those distributors who have been pioneers of the day-and-date evolution to supply Cinetic with their cable and broadband VOD gross numbers so we can post a comprehensive snapshot of the distribution industry each week,” Sloss said in a statement. “The [Multi-Screen Gross statistic] is designed to help filmmakers make more informed choices when deciding between more traditional theatrical scenarios and day and date releases.”

In their exclusive report, Deadline reports via Sloss that in the two weeks since its release, Escape From Tomorrow earned $139,334 at the box office, relative to $120,560 on VOD and other platforms. “There are a group of distributors that are increasingly moving toward day-and-date releases,” remarked Sloss. “There must be a reason they’re doing that. They know it. There’s no reason why filmmakers and financiers shouldn’t know it as well. Rather than just making a decision based on faith, they should be able to do just like the distributor is doing by making decisions based on information. It’s time for that statistic to be known.”

The transparency issue has been making its fair share of waves as filmmakers are hard-pressed to understand and gauge VOD’s worth. Alicia van Couvering considered the confidentiality of transactions in our Winter issue, while Anthony Kaufman consults distributors on VOD’s resulting and unjust stigma in the current issue of Filmmaker. It seems the more open the industry is about the platform, the more useful it will be. Sloss’ first step is indeed a great one.