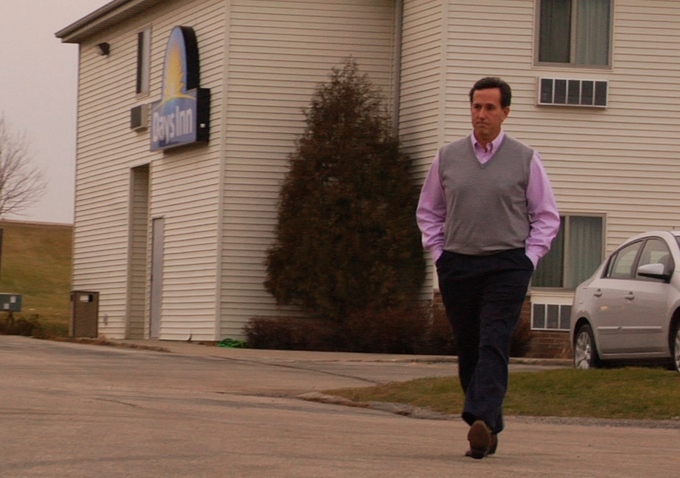 by Brandon Harris
in Directors, Interviews
on Nov 8, 2013

The 2012 candidates for the Republican Presidential nomination — in other words the people who vied to be the standard bearer for those responsible for the government shutdown spurred by opposition to the Affordable Care Act — were photogenic, prone to gaffes: a documentarian’s wet dream of a cast. The GOP primaries offered us ambitious charlatans and lunatics eager to put themselves of display, finding room after room of deluded or poorly informed or simply mean-spirited white people to entertain and cajole. The entire primary season, while not as entertaining as it could have been (how can people with such depressing and shortsighted views of the world ever sustain much humor?), offered enough drama for five movies and it is my great pleasure to inform you that veteran docmaker A.J. Schnack’s Causus, a profile of six months with the Romneys and Santorums and Bachmanns and Cains and Pauls in Iowa, is one of the great political non-fiction films of our time, a worthy successor to Robert Drew’s Primary and Chris Hegedus and D.A. Pennebaker’s  The War Room.

With startlingly intimate access to all of the key candidates, Schnack retells the story of one of the wildest primary seasons in memory, uncovering a lot of what we would expect (ignorance and bigotry among the country folk, cynicism masked as patriotism from the candidates and their spouses) along with much we wouldn’t — who knew Newt Gingrich was such a zoo nerd? The film chronicles many of the best gotcha moments from the trail; we see new, firsthand footage of Romney claiming “Corporations are people,” for instance. Yet the personalities of the figures are what shine through the most. Dr. Ron Paul, this author’s avowed favorite among that paltry field, comes off well in his brief appearance, although he simply is incapable of closing a minivan door, his dutiful son Rand having to operate the auto-door for him in one of the movie’s great comic set-pieces. Santorum emerges, somewhat queasily, as the hero of the story; he did win the caucus after all, on a recount, in what seemed at the time to be a minor miracle. But the film documents his everyman vibe, his diligent work ethic, his sensitivity, his love of family and his suffering of fools with aplomb. He’s also never seen a food spread he didn’t want to devour. It’s full of humorous bits like this amidst its picture of our political discourse in freefall; whether its Newt Gingrich getting mic-checked by Occupiers only to then, 10 minutes later, flirt with female students as he leaves U of I, Herman Cain’s exuberance at discovering the existence of another black Republican not named Allen West or Colin Powell, or Michele Bachmann waving to her non-existent onlookers for the camera, only revealed after a brisk and expert pan. These clowns make for a terrific night at the cinema, as long as they’re not in charge. 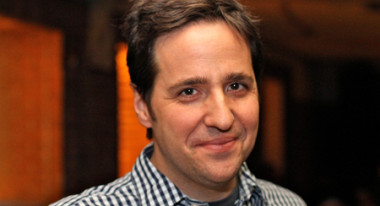 Filmmaker: Are you a political junkie? If so, how did this project grow out of your interest in politics?

Schnack: I’ve always been really interested in politics, going back to being a kid. Campaigns and elections really fascinated me. But specifically, when I was in college at the University of Missouri, I went up to Iowa to cover the caucus for the student newspaper. As someone interested in both politics and media, seeing the entire political and media universe descend on Des Moines was one of the most amazing things I’d ever seen. I’ve been really interested in Iowa’s role in the presidential nominating process ever since and had been thinking of making a film about the caucus process for a number of years. I think we really lucked out with this particular go-round and these candidates.

Filmmaker: What were the circumstances under which you contacted the campaigns? Were they aware of what you were doing? Did you arouse their suspicions? If so, how did you gain favor and access?

Schnack: We went to Iowa pretty early, even before most of the candidates declared they were running, and met with a bunch of folks on the ground in Iowa: Republican party officials, Tea Party activists and local politicos. So there was a sense among folks there about who we were and what we were up to and those Iowa folks really helped vouch for us with the campaigns. But yeah, I think all the campaigns at some point assumed we were Democratic trackers or activists hoping to capture some election-ending gaffe, a “Macaca moment” if you will. But as we kept coming back again and again and our footage wasn’t showing up anywhere, I think they just figured that we were who we said we were. We told them that the film wouldn’t come out before the elections, so they didn’t have to worry about it affecting the outcome. But there’s no real good reason to give us the access that they did, so I give all the campaign folks a lot of credit.

Filmmaker: Have any of the candidates seen the film to your knowledge? Do you hope to show any of them the film at some point?

Schnack: Senator Santorum has seen the film and has been pretty public about the fact that he likes it a lot — certainly it captures a pretty special experience for him and his family. I’d love for them all to see the film, but their reactions may vary.

Filmmaker: Did you ever consider continuing on to New Hampshire and beyond?

Schnack: No, we wanted to stick with the Iowa story and made the decision to only include the footage that happened there. Actually, it was pretty funny on Caucus night, our friends in the national press corps would say to us, “See you tomorrow in Concord,” and we were like, “Oh no, you won’t. We’re going to the bar.”

Filmmaker: Who is your personal favorite of the candidates? Why?

Schnack: I really liked being around Newt Gingrich because he was always going off message in a really interesting way. By that, I mean he’d give a big speech on brain science, something completely disconnected from what the politics of the day were, and he’d be offering up these really unusual, unconventional ideas. It was so wonky and different from everyone else’s campaign-style.

Filmmaker: Were you ever in the position, as the candidates were themselves, of needing to raise more money midstream?

Schnack: We’ve were able to shoot the film, but as with a lot of filmmakers, we had to raise money during post. We’re still trying to raise money just to get the film out as broadly as we can. So, I sympathize with them on that count, definitely.

Filmmaker: What were the biggest challenges during the edit? Did you have to lose things during that process that were painful?

Schnack: Once we knew that we were going to focus on and juxtapose the campaigns of Senator Santorum and Congresswoman Bachmann, we knew that it meant not being able to include all of our favorite moments of the other candidates. There’s some stuff of Governor Perry and Speaker Gingrich and Herman Cain, even Tim Pawlenty, that I really miss, but that’s what outtakes are for.

Filmmaker: The movie is somewhat reminiscent of Drew’s Primary and Pennebaker and Hedgeus’ The War Room. Were those important touchstones for you?

Schnack: Huge, yes. As a student of documentary and a fan of vérité films, we definitely wanted to operate in the same stylistic space as those two films. I mean, the film is called Caucus, so we’re pretty transparent about the influence of Primary. Those films are so deep in my psyche that there are a few moments in Caucus that are unintentional call-backs to those films, things I didn’t realize until I saw The War Room at Hot Docs where I was also premiering Caucus. Seeing Bill Clinton onscreen chowing down on a bowl of cereal a day or two after watching Rick Santorum eat his way across Iowa made me tip my hat once again to my predecessors.