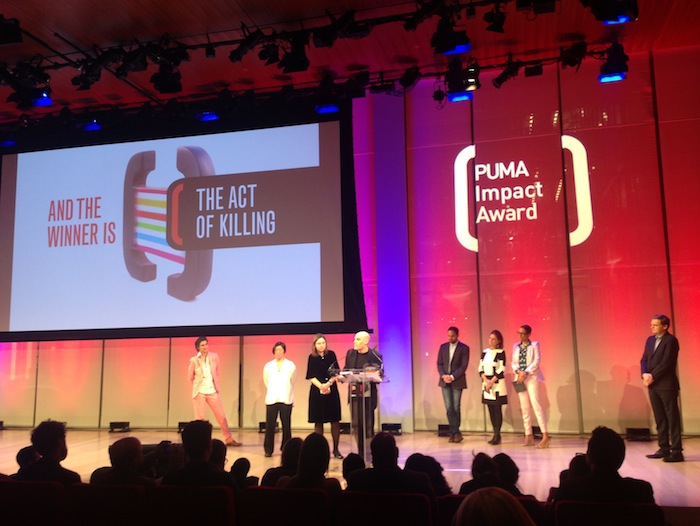 by Sarah Salovaara
in Festivals & Events, Filmmaking
on Nov 14, 2013

BRITDOC, Bully, Documentary, The Act of Killing, The Interrupters, The Invisible War

Last night at the Times Centre in New York, BRITDOC’s Puma Impact Award was bestowed upon the visibly shell-shocked filmmakers behind the year’s most innovative film, The Act of Killing. Director Joshua Oppenheimer, co-director Christine Cynn, and producer Signe Byrge Sørensen assumed the stage to collect their iridescent trophy – and its accompanying 50,000 Euro prize, to be split between the team and their activist efforts – from jurors Susan Sarandon, Zadie Smith, and Ricken Patel. Absent were two members of the jury, Gael García Bernal and Eric Schlosser, but, perhaps more notably, The Act of Killing’s anonymous co-director and 60 crew members who risked their lives in the making of the film, and continue to do so, in the proliferation of its message. “We would love nothing more than to replace the credits sequence,” an emotional Oppenheimer said of the Indonesian censors.

The ringleader for the evening, BRITDOC’s CEO Jess Search, described the Puma-sponsored honor as “a reward for the documentary film that has created the most significant impact.” Indeed, her foundation assembled impact reports, monitoring the lasting effects the five nominated films and their respective campaigns had in elevating awareness and promoting change. In addition to The Act of Killing, the other finalists included The Interrupters, Bully, The Invisible War, and Give Up Tomorrow. Whittled down from a shortlist of 14 by a process of peer review, the Puma Impact Award presents a unique opportunity to gauge the significance of a documentary years after its release, as every film save The Act of Killing was distributed in 2011.

Mira Nair, a juror in 2012, introduced the series of film-specific presentations with a tribute to the stamina of documentary filmmaking, “in a world that regards beauty as commerce, and truth as increasingly unpalatable.” “There is not just one truth,” opined Nair, “it depends on who’s doing the looking and where,” before regarding the medium as one “that has the potential to affect the world more than a missile or a drone.”

First up was Steve James’ The Interrupters, which follows members of the organization CeaseFire, as they strive to protect Chicago communities from the very violence they once employed. Since its Sundance premiere, The Interrupters has screened in over 400 communities, and Chicago mayor Rahm Emanuel has pledged $1 million to CeaseFire. Principal subject Ameena Matthews – a centerpiece in Robert Greene’s call for the creation of a Best Performance in a Nonfiction Film, which the Cinema Eye Honors have dutifully answered – was on hand along with the filmmaking team. She called the film an essential opportunity to acknowledge violence, “the pink and purple 89-billion ton elephant that sits on our chest…that we have the influence to stop.”

Lee Hirsch’s Bully set out to reach 1 million children through germane school screenings: they currently stand at 2.9 million. Further, two teaching unions in DC banded together to organize screenings for policymakers, courting the attention of President Obama. David Long, a subject of the film, whose son Tyler committed suicide as a result of classroom torment, said that, “without Lee, I don’t think we’d have a voice today.” Long and his wife Tina have since established everthingstartswith1.org to combat the bullying epidemic. 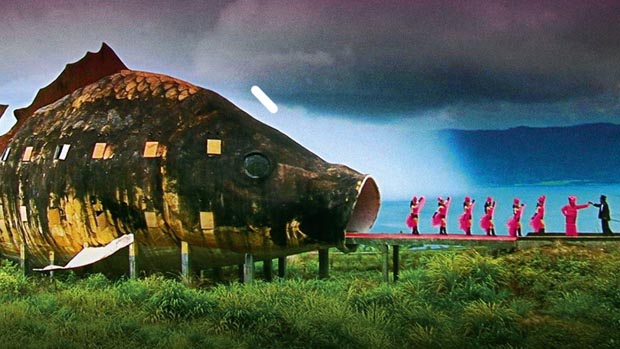 With the release of The Act of Killing, the Paula City government took the unprecedented step of issuing an official apology to its citizens, publicly acknowledging the Indonesian genocide for the first time, nearly half a century after the fact. What began as 50 local, covert screenings on International Human Rights Day, eventually grew to a free online download, available to all Indonesians without the meddling threat of censorship. Oppenheimer, who speaks with a swift and almost inhuman intelligence, urged audience members to visit saysorryfor65.org, and speak out about the upcoming 2014 presidential election, and its frontrunner, Prabowo Subianto, who was responsible for some of the worst human rights violations during the Indonesian dictatorship.

Oscar nominee The Invisible War, which offers an unflinching look at sexual abuse and its devastation in the United States military, succeeded in boosting government spending by $30 million in the prevention of assault. Producer Amy Ziering believes that the film’s successful impact lies in its message, one that is not simply anti-military: “We wanted it to be heard by the military as a critique, and not an attack.” Instead, Ziering and director Kirby Dick sought to illustrate the inherent issues of “reporting a crime within your chain of command.” Though they were unable to convince any senators to participate in the filming of The Invisible War, 46 have now signed the government petition. Their great strides can be found, as Zadie Smith noted, “in a total of 20 pieces of new legislation,” as she conveyed the film a Special Commendation Prize.

Lastly, Give Up Tomorrow, the decade spanning chronicle of Spaniard Paco Larrañaga, wrongly sentenced for rape and murder in the Philippines, miraculously led to the abolition of the country’s death penalty in 2006. Filming brought the case to the attention of the Spanish government, who negotiated Larrañaga’s expedition to his home country, where he currently has 20 years left in his sentence. Members of BRITDOC visited Larrañaga on prison break from cooking class, the same passion he was pursuing when arrested 14 years earlier, who remained confident that “the truth will set me free, it’s just a question of time.” Filmmakers Michael Collins and Marty Syjuco run freepaconow.com to keep the pressure on.

Sustaining an impact is more than just bolstering good over evil, offered Oppenheimer in his acceptance speech. Not only that, but, “We need more than just popular moments – for instance, Barack Obama being elected the first African-American president — we need popular movements.” Causes that an audience and a people can sink their teeth into. Much like their fellow finalists, The Act of Killing team won’t be letting up anytime soon, as Sørensen casually mentioned that another film, this time from the formerly guarded survivors’ perspective, could be out by next August.