All in the Family: Shawney Cohen on The Manor 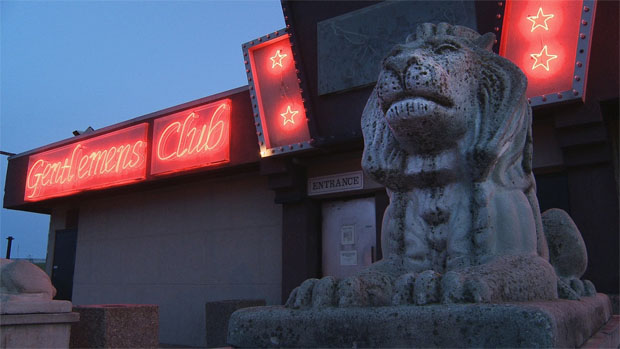 by Lauren Wissot
in Directors, Interviews
on Nov 15, 2013

The following interview was initially published at the time of the film’s world premiere at Hot Docs 2013. This week, The Manor plays as part of DOC NYC.

The titular subject referred to in Shawney Cohen’s debut feature has nothing to do with ladies and lords, but with the Cohen family business – a combo strip club/motel in a small Canadian town. And The Manor has nothing to do with in the ins and outs of the sex industry, so to speak, but with the inner workings of the Cohen family, which includes Shawney’s 400-pound father (who bought the place when the director was only six) and 85-pound anorexic mother. Ultimately, the doc’s not so much north-of-the-border, reality TV than a nuanced portrait of a loving yet dysfunctional family, more in the vein of Capturing the Friedmans and Crazy Love.

Filmmaker spoke with the director/son/strip club manager prior to the film’s world premiere today as the opening night feature of this year’s Hot Docs.

Filmmaker: So this must feel quite amazing for a first-time filmmaker to open such a big, prestigious film festival. What was the production journey to Hot Docs like? I read somewhere that you pitched at IDFA Forum.

Cohen: The journey was unconventional, to say the least. Over the last few years I have been wearing two hats: one of son and strip club manager, and the other of filmmaker. In 2011, we pitched the film at IDFA and it was the first time I showed my footage in any type of public forum. There were a lot of important issue docs being pitched – from global warming to the Egyptian revolution. I remember thinking, “What the hell am I doing here with a family film about a strip club?” I had no idea what to expect, but we ended up winning an award for best roundtable forum pitch and, shortly after, (awarded financing) from the Tribeca Film Institute Documentary Fund. I think it was because The Manor was a refreshing departure from the type of social issue docs broadcasters were expecting.

Filmmaker: As someone who’s experienced the sex industry firsthand I’m always delighted to see it depicted authentically, sans the sensationalist bullshit, to get to the more mundane aspects of what is, at heart, a business – or, in your case, a family business. Indeed, this film could have followed a number of storylines. What prompted your decision to remain so narrowly focused on the family and its dynamics, giving very little screen time to the strippers or to the dynamics of the Manor itself?

Cohen: I remember the first time I filmed my father. At the time he was close to 400 pounds, smoking a cigar and swearing in Hebrew on the phone in his office. I could barely understand a word he was saying, but he just jumped into the lens. I experimented with shooting other storylines related to the club – strippers, pimps, customers, etc. – but to be honest, their stories just bored the shit out me. For a while I felt directionless, until I filmed my mother. She’s been struggling with anorexia for years and her addiction was something she would rarely speak about in person. However, the second the camera was pointed in her direction she just opened up – especially about her relationship to my father and her feelings about the strip club. The heart of the film is about my parents. All other story arcs, including the strip club itself, are just a dimension of their relationship.

Filmmaker: Watching your parents onscreen I was reminded of Burt and Linda, the eccentric subjects of the documentary Crazy Love. Obviously your father never went to the extreme of blinding and scarring your mother with lye, yet one could read that his emotional abuse is similarly, insidiously increasing her dependence on him (while driving her to a slow suicide). And yet, like with Burt and Linda, it’s nearly impossible to think of one partner existing without the other – either both heal together or neither will. Was turning your lens on your parents at all an attempt to probe the mystery of this complex relationship?

Cohen: Good question. During the process of making the film, what I found most interesting is how well my parents actually know each other. When I screened the film for them for the first time, my biggest fear was thinking I may have pushed the boundaries too far and created an extra layer of anger that might be seriously detrimental to their relationship. I was wrong. The first thing my mother said to my father immediately after the screening was, “Roger, that’s exactly how you are,” and then she started to laugh. Despite the emotional abuse, codependence, and all their dysfunctional craziness and addictions, I’ve come to accept they understand each other in a way I never will. They’re currently on an intimate two-week vacation in the Bahamas together.

Filmmaker: Another aspect that makes your strip club story quite unique is that it’s told from the male employer’s point of view rather than from the female employee’s. You, your father and brother feature most prominently in the film. Was it a conscious choice to cast the women in minor roles, so to speak?

Cohen: While I help propel the story with my voiceover, this film is told from the perspective of the core nuclear family – a family running a strip club. I often get comments from people who watch the film like, “My family’s been running a bakery for years… I understand where you’re coming from.” Casting The Manor and all characters related to it in a secondary role was a conscious decision. They are the backdrop to the four of us. I will say my mother’s voice is quite prominent in the film, especially in the second and third act. My mother and I spend the least amount of time at the strip club, so some scenes at the Manor may appear to be dominated by my father and brother who are there all the time.

Filmmaker: Any future projects currently on your plate? I can see Hollywood come knocking to turn your doc into a reality TV series, though that doesn’t strike me as something a Canadian director would jump at the chance to do.

Cohen: I have some ideas in the oven. It’s been a long road and took almost five years to complete The Manor. I want to be absolutely certain my next project is the right fit for me. Funny you mention reality TV… I’ve had a few opportunities to go in that direction. I like Storage Wars as much as the next guy, but I’m not sure I could do that to my family. (Although my dad is addicted to Pawn Stars.)