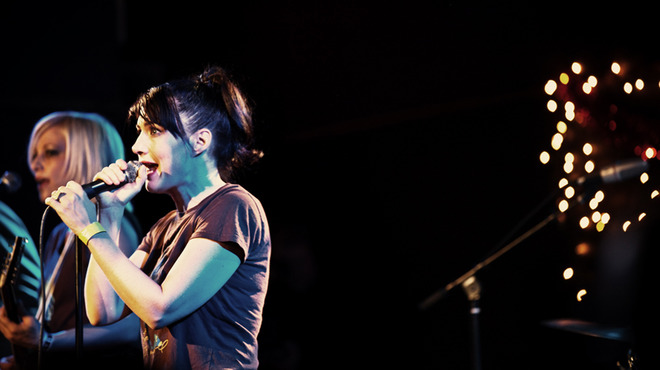 by Brandon Harris
in Directors, Interviews
on Nov 30, 2013

For many, Kathleen Hanna — frontwoman for the bands Bikini Kill and later Le Tigre — was the defining protopunk, feminist icon of the Clinton and W. eras. A centrifugal force whose career spans the entire era in which the genre folks used to call Alternative Rock grew and waned in popularity, this riot grrrl mysteriously left the public eye in the mid aughts without any explanation. In The Punk Singer directed by Sini Anderson, a friend of Ms. Hanna’s, and produced by the music video auteur and CB4 director Tamra Davis, she reemerges from the shadows of semi-retirement. The film is a fairly straightforward archival-footage-meets-talking-heads celebration of the rabble-rousing Ms. Hanna, but fortunately for her and Ms. Anderson, there is more than enough revelatory footage from the heyday of her two acts and the scenes they floated in and out of to make the movie more than a mere celebration of the rocker. Plus there’s the unearthing of just why Ms. Hanna has been sidelined for so many years, which will surprise and sadden many.

Lyme disease is a difficult thing to treat and an even harder thing to diagnose we learn from Ms. Hanna, her travails with the disease portrayed with stark intimacy by Ms. Anderson as the piece draws to a close. A bit older and more haggard in her contemporaneous interviews, Ms. Hanna is nonetheless still the prickly and charming presence that was at the center of her incendiary bands, ones which proved to be remarkable influences on an entire generation of performers. She seems at home with Ms. Anderson and though the approach my border on hagiography, the intimacy that she shares with Ms. Hanna and her inner circle, including Kim Gordon, formerly of Sonic Youth, and husband Adam Horowitz, formerly of the Beastie Boys, allows Anderson to score one fresh and candid insight after another from her subjects.

The Punk Singer had its world premiere at this year’s South by Southwest Film Festival. It opens in limited release today from Sundance Selects. 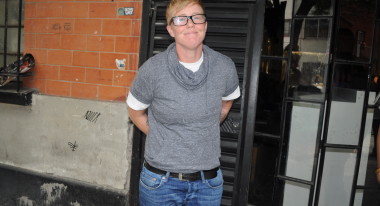 Filmmaker: How did you go about approaching Kathleen about doing this documentary on her life and work?

Anderson:  I’ve known Kathleen about 12 years. We’re friends. She approached me about working on a doc about Le Tigre. That evolved into more of a conversation about when she was going to tell her own personal story.

Filmmaker: Was she reluctant to do that initially? Did it take some convincing?

Anderson: It took a little bit of convincing. I think she was nervous about the idea of their being a piece that was completely concentrated on her and her work. What it really took was making her understand that there are a lot of young feminist out there who could benefit from hearing her story. Once you tell Kathleen that, she responds. She had not told her story before in any real, human, personal way. That was what I was interested in getting at, both what was behind all her music and activism.

Filmmaker: When did you start to collect interviews and tracking down archival footage specifically for this doc.

Anderson: The conversations with Kathleen were shot over the course of one year. We went and shot at her lake house every season for one year. We started in the summer and ended the following spring. I waited to do interviews with outside people, those interviews that you can see which were shot in a van, a big punk rock band with Christmas lights and stuff, that lasted about another six months after we finished shooting Kathleen. I was pretty organized about it. I knew who I wanted to talk to and had a schedule.

Filmmaker: Were you cutting during that period as well?

Anderson: No, we weren’t. Were were doing a lot of reviewing of the footage, but we did not start to cut until we shot much more. I was doing a lot of watching, however.

Filmmaker: This is a very revealing project in so many ways. Were there things that you learned about her that were complete surprises to you, despite the friendship you’ve had with her?

Anderson: I was pretty shocked to know that she didn’t really have a foundational storyline of what her life is really about. In one of the last scenes in the film she asks, “What is the story of my life? I have no idea.” I found that pretty shocking. This movie happened because of our friendship and  the thing that was most surprising was that she was coming to some conclusion about her life while we were shooting, so we’d have these uncomfortable silences that would last a few minutes and normally you’d cut the camera off and give her a second and my camerawoman would turn to me and ask, “Should I stop?” and I’d say, “No, it’s okay.” We sat in a lot of long silences until she could formulate her thought and put it together and come to a conclusion about something, right there in the moment. I felt like that is really special. I don’t think that’s something we get to see a lot. When something wasn’t formulated, we could talk about was. There was this emotional space to just sit there and let her process things. A lot of surprising things came out of that. That was my favorite part of it. One of the most surprising things is she isn’t really sure herself why she’s stopped playing music. She was kind of working that out as we were shooting these interviews. She told herself and she told her husband she had stopped because she had said everything she needed to say, but it was really because she didn’t have control over her body. So that was really shocking.

Filmmaker: The ravages of Lyme disease are a really profound thing. There are moments when you show her on medication and really struggling, but were there were moments you’d have to pull back from, in fairness to her privacy, when depicting how what’s happening to her?

Anderson: She was really open and willing, and so was her husband. They would always inform me when I couldn’t be there. As two feminist artists, we both know that what we consider the most feminist thing to do is to tell the truth and say, “This is what I’m doing, this is where I’m at, it might not be pretty and it might not be cool, but it’s the truth.” The nature of Lyme disease is a political one in that its diagnosis is hard to come by and comes with a certain stigma and we thought it was important to include that. It was a big consideration to see what we should include, what we should not include. I think we ended up on the conservative side of things. Some of the footage that was not included is super intense. We choose to go that direction because we didn’t want the disease to cancel out the rest of her story, we wanted it to balance out and not overshadow everything. We didn’t want the Lyme disease to take over her entire story. It was a big consideration.

Anderson: She saw our second rough cut. She was like, “You guys are doing great.” She was really hands off until the very end. When Tamra Davis came on, she was coming in and giving more notes, mainly stuff about accuracy and time frame. But she was really gracious throughout.

Filmmaker: Was there stuff you had to lose in the editing that was really precious to you, stuff you wished you could have included?

Anderson: Oh my God, so much! [laughs] Nearly about 30 minutes. The answer that I’ll give you is that we didn’t have an opportunity to share with the audience how funny she is. We had to cut a lot of the humor. The hard answer to that is that there is sort of an architectural frame that the film is shot in, it had a lot more silences. We ended up losing some of the art and some of the humor.

Filmmaker: What was the motivating factor behind some of those editorial decisions?

Anderson: We wanted a really tight cut where we could hold people’s attention. That’s what you do. I would love to see the longer cut. I’d love other people to see it, but I feel so happy about where we were able to get to. It’s doing its job for people, it’s holding their attention and her story is coming across, so that’s the most important thing. As a filmmaker, I want more of the art in there, but I think it still did come through. She could have her own special on Comedy Central or something, though; she’s hysterical. As much as we were laughing in the editing room, it was better this way.

Filmmaker: How did your relationship to the film change over the couple of years you were making it?

Anderson: I’m interested in people stories. Whether I do it in a film or in a book, I’m interested in the story, in emotion, in moving people. I just started a feature documentary about the ravages of late-stage Lyme disease in part because I did this film. All of my subjects are feminists. I’m really interested in there stories and experiences of going to doctors and being misdiagnosed. But to go back, I don’t think I’m as optimistic now as I was when I began making this film. It was really really hard and I’m very grateful for the movie is being seen, that the hard work is finally paying off, but it really sucked at times. It was really hard to finish it, it is really hard to pay the rent, but it’s not going to stop me. Even if I’m cranky about it or something.