Visual Effects on a Budget – Don’t Fix It in Post 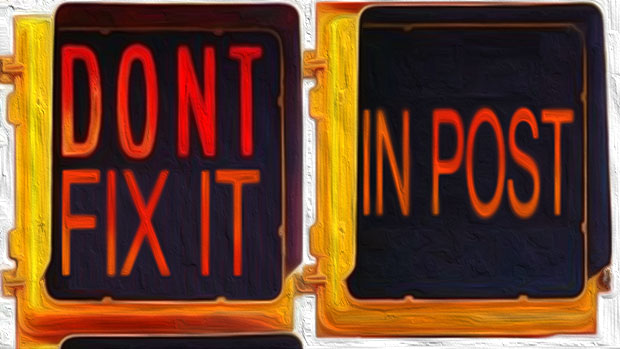 by Michael Murie
in Post-Production
on Dec 4, 2013

Visual effects supervisor Scott Squires appeared this week in an online webinar for Moviola.com entitled “Visual Effects on a Limited Budget.” His number one tip? – Don’t fix it in post.

The presentation began with a look at the different roles in Visual Effects and the factors to consider when designing shots. Squires, who worked on movies such as The Mask and Star Wars: Episode 1 – The Phantom Menace, then spent some time stressing how important planning is, and how shooting it right the first time, rather than fixing it in post, will save you time and money.

It’s particularly important to avoid unnecessary fixes, and Squires suggested that you should work like there were no digital fixes possible. Many of his tips were basic; use makeup to hide imperfections or tattoos on your actors, and make sure wigs are adjusted correctly. He cited a feature film that spent $2 million on makeup fixes.

Squires stressed the importance of storyboards for planning your shots and clearly communicating what you want to accomplish. Clear storyboards make it possible to break down your effects shots and help you figure out ways to reduce them. “It’s important to make each shot count, that they tell the story and aren’t just eye candy,” said Squires. He believes it’s better to have a few well-done VFX shots rather than a lot of poorly done ones. “If you’re on a limited budget, you want to do as few as possible”

Other tips he offered included researching old methods and stage magic, like Pepper’s Ghost, forced perspective and Poor Man’s Process, and he highlighted early movies that used practical effects, such as Jean Cocteau’s La belle et la bête (Beauty and the Beast) made in 1946. This movie features many imaginative effects.

Squires recommended using locations that are as close as possible to your final results, even if they aren’t exactly what you want and you know you’ll have to add plates or other VFX. The closer the location is to the final result, the less VFX will be needed, and the easier it will be to add the VFX. There was also discussion of using miniatures, another option that may save time and money. “It can take weeks to get an explosion right in VFX, and you could do it in a couple of days with miniatures,” said Squires.