Revising Your Script: The Evolution of Even The Dogs Know 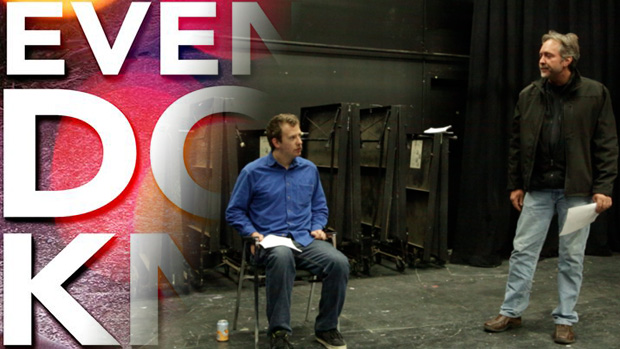 by Michael Murie
in Screenwriters, Screenwriting
on Dec 16, 2013

Michael Capodiferro, a student at Hampshire College, has written the script for Even The Dogs Know and is planning to direct the short film as his senior project. The film is about the lengths someone will go to find someone to talk to.

In a description of the project Capodiferro briefly outlined the process of developing the script:

The script work for Even The Dogs Know began almost a year ago in January. It was a much darker, in-your-face, louder story than it is now. It’s taken me many drafts to build up the story and tear it down again and again.

Intrigued by how the script had evolved, and because Capodiferro had worked on the script through several screenwriting classes and workshops, I asked him if he would explain the evolutionary process of the script in more detail:

“I started with the pure intent of telling a good story. The original story revolved around an old cowboy notion of killing somebody for the fame of it. The character Nate had killed a semi-notorious musical artist that night and Jim arrested him for it. The script was about legacies and that’s a thread that stayed with future drafts.

“In the Spring of 2013 I took a Screenwriting class with Andrea Hairston at Smith College. It was there that I went through the process of revision. I would write a couple of pages, the classmates would read it, and in class we’d all discuss it. I’d take notes, ask questions, then go home to rewrite and revise. Since it was a group of about 15 people I didn’t reach out to other people to read my script yet. In that workshop I completed a draft of the script that was about 10 pages.

“For our final, each of us put together a staged reading of our scripts. From that staged reading I got a sense of what characters belonged in the story and what didn’t. I also learned how the tone of my piece was perceived. 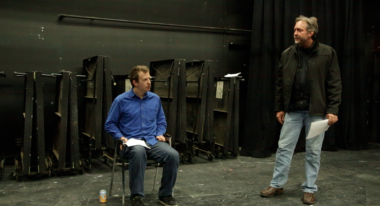 “That summer I did an internship with Hampshire College alum, Will Reiser, writer of the award-winning film 50/50 starring Joseph Gordon-Levitt and Seth Rogan. With the notes I got from him and through the subsequent drafts that I did, I learned that I had lost the soul to my script. It was a tight sound script, but it lacked heart.

“I spent a couple of weeks starting a new draft from scratch, and restarting again and again. Finally I had one long night where I pushed through and got to a new end. I cut two characters – the wife and son of the cop – and I also cut the story of the infamous musician. I broke the story down and got to its core, which was about these two men not knowing how to deal with their emotions.

“This year I was also a part of Susan Shilliday’s screenwriting workshop at Hampshire, and it was within that class that I finalized the script. I spent most of the time stripping the script down to its core, even to the point where I removed the fact that it’s Valentine’s day. From the skeleton, I built it up again adding back the Valentine’s Day bits and some other details to give the characters more depth.

“I always tell people to only let a maximum of two to three people read your stuff at a time. With that amount of people you can see what notes overlap, and what contrast, and then make your own decisions as to what to edit.

“I enjoy being a storyteller simply because I’m curious about the people around me, and their stories. I consider Even The Dogs Know a black comedy; humor for me is seeing something as it is, simple and true. Revealing the truth of a person. Comedy and tragedy are one and the same, and when you’re able to balance on the fine line between them you get something that is true and heartfelt but also something a bit absurd.”

Principal photography for Even The Dogs Know is planned for January, and Capodiferro is running a Kickstarter campaign to raise the $3,500 to rent equipment and fund the film. (Full disclosure, my daughter is a student assisting with the production.)