Nymphomaniac: Lars von Trier Up to His Old Tricks 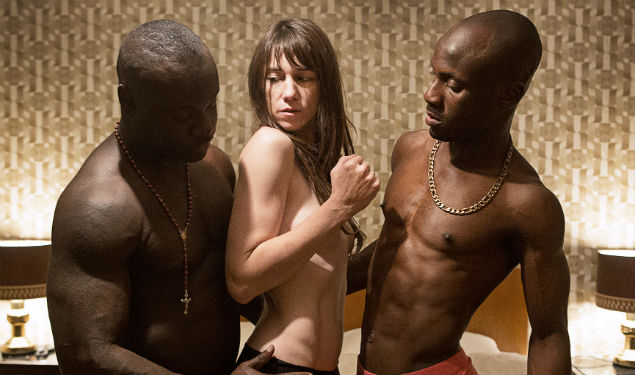 This review of Nymphomaniac is based on seeing both films back-to-back with a 25-minute interval, whereas it will be released theatrically in the U.S. in two parts, Volume 1 in March, and Volume 2 in April.  As such, this review will try to take the two films as separate entities. I have tried to write them without containing spoilers, but some I fear, are inevitable.

Nymphomaniac arrives on the back of one of the best marketing campaigns in years. The first “() Opening Soon” poster was on its own pretty special, but it was trumped by the series of posters introducing all the characters with their “bedroom” faces on (even if some of these characters, such as the waiter played by Udo Kier, have less screen time than most sexual encounters).

Yet much is as expected: Trier quickly sets up a narrative structure that carries all the hallmarks of his oeuvre, namely the meeting of a highly sexual female figure and a Christ-like paternal male. In the stead of Bess and Jan from Breaking the Waves or, more pertinently because of this film’s casting, He and She from Antichrist, are Joe (Charlotte Gainsbourg) and Seligman (Stellan Skarsgård).

The couple meet in an eerie opening, worthy of von Trier’s TV series The Kingdom. A long-held black screen, followed by a camera panning slowly down a building to the ground, sees Seligman come across Joe lying prostrate on the ground. When she tells him not to call an ambulance, he decides to take her back to his apartment. We then see them in a sad looking bedroom, old wallpaper, a single bed, and a window that looks out onto a wall. The oddness of the room only becomes stranger when Seligman reveals himself to be a well-read intellectual.

Seligman insists that Joe recounts how she got into the predicament. Joe, beaten and seemingly unaware that she could be viewed as being in a vulnerable position, warns him that the story will be “long and moral.” It’s the first of many self-referential moments, in which the protagonists act like a Greek chorus commenting on the action. The interjections are nearly all done for comic effect. The best of them sees Seligman comparing women wooing men to a fly fisher trying to catch fish in the sea. The human sexual instinct is always an animal instinct in von Trier’s films. Sex creates chaos and there is a sense of “here we go again” as the story unfolds.

Joe tells the story in chapters, five of which make up this film. Joe’s storytelling, like her attitude to life, is blunt in style: “I was two years old when I discovered my cunt.” Her mother (Connie Nielsen) is “a cold-hearted bitch,” but thankfully she has time for her father (Christian Slater), who takes her on walks through nature. Slater is the archetype of the benevolent man who eventually, and in typical von Trier fashion, cannot cope with how society resists his attempts to create a perfect world.

Joe’s story mainly concentrates on her sexual journal: The deflowering, the removal of love as part of “lovemaking” and passionless encounters. Never is Joe seen enjoying her encounters, she lies about orgasms, has multiple partners in single nights, and makes choices about men by throwing a dice. And here is where von Trier’s films stand out: Joe doesn’t view herself as the victim, but the men she conquers. She’s in control. This is so against the norms of society that it creates a destabilizing effect, one that von Trier is only too aware of, and exploits.

Long gone are the days when von Trier’s films could be seen as a provocation. He lives in a secular society where the church has lost influence, so attacking religious doctrine just doesn’t have the same impact it once did. And von Trier doesn’t attack the idea of God per se, just the idea of a hierarchical structure that was created when women didn’t have the right to a public life. All von Trier does, and increasingly effectively, is try to make a deeper, more analytical interpretation of how female sexual emancipation has changed society and the relationship between the genders. His main construct is that the idea of romantic love and a monogamous relationship are unrealistic and unobtainable goals that only create pain and heartbreak. To ram this point home, a poem by Edgar Allan Poe is read out.

What’s great is how von Trier relays these ideas with so much humor, especially in the early chapters, where we get to see the development of the nymph. There is one great set piece, a train journey that introduces the world to the talents of two formidable young British actors, Stacy Martin (who plays the young Joe) and Sophie Kennedy Clark (who plays her best friend B). The main thrust of Nymphomaniac: Volume 1 is the relationship between Joe and Jerome (Shia LaBeouf), who comes in and out of her life with such regularity and increasing incredulity that at one stage Seligman complains that he can’t believe what she is telling him. LaBeouf tries hard to speak with a British accent and gives a performance that will leave his many detractors still undecided over his talents. (Why the film is set in Britain, or where exactly it’s meant to be, remains something of a mystery to this London-based reviewer.)

Skarsgård delivers a brilliant performance as Seligman, although not much is revealed about him except that he’s well-read, benevolent and seemingly not willing to cast judgments on behavior. He is always looking to make sense of human behavior, concerned without being threatening.

Having set its stall out as a comedy, the film takes a more serious turn as Joe gets older and the demands of life become more challenging. She has to cope with death, and work, and the increasing array of boring partners. Then there is the question of love. Nymphomaniac: Volume 1 concludes with much to be resolved.

There is a tonal shift in Nymphomaniac: Volume 2. Both parts are full of references to von Triers’s earlier films; there is even a massive joke made of this, as a baby walks towards a balcony in a scene lifted from the beginning of Antichrist. But whereas Volume 1 is more freeform in approach, Volume 2 has a more structured genre narrative and revelations that make it thematically more similar to the dark revenge tale Dogville. Like Melancholia, the second half is more serious than the more humorous first half.

There is also a problem with the second half of the film in that von Trier tries to impose a plot on what has hitherto been a character study. A gun enters the storyline, there is extortion and blackmailing and this eventually leads to an ending that is over the top.

Also, von Trier tries to deal head-on with several of the ideas that germinate in Volume 1, and the results often seem like he has taken a sledgehammer approach, rather than the subtlety and ambiguity that are a hallmark of his best work. It seems that at times von Trier just doesn’t know where to stop.

This approach can be seen in the approach to the church. There is a revelation made about Seligman that reinforces the idea of him as priest, and the opening chapter is prefaced with the proposition that Orthodox Christianity is based on pleasure and happiness while Roman Catholicism is all about suffering. And boy, does Joe suffer, physically rather than mentally.

Joe loses her sex drive and the attempt at rediscovering her clitoris is the focus of her journey in this second part. It’s at this stage that Gainsbourg replaces Martin in the flashback scenes. The Antichrist star takes on the scenes in which Joe is subject to violence and the action has a more sinister hue. Gainsbourg seeks out a man (Jamie Bell in a revelatory role) who will dominate her physically.

But there are too many moments where it seems that von Trier no longer trusts the audience to interpret his ideas for themselves. The reason for this seems to be the infamous Cannes press conference for Melancholia where he jokingly said that he once thought he was a Jew but it turned out he was a Nazi (is it any coincidence that this is almost the narrative ark of Seligman?) and then ended up being made a persona non grata at the festival. This is the first major von Trier drama not to debut in Cannes. The director, like a lion he shows on one of the many moments when archive footage is put on screen, doesn’t seem to react well to being a caged animal. Being on the defensive doesn’t suit him. A debate about the use of the word “negro” sees Joe argue successfully that words shouldn’t be banned from society. While I agree with von Trier’s sentiment, it took me out of the film momentarily, and also the case he makes for his own defense wasn’t very strong. It seemed petty.

He’s also too on the nose when talking about gender roles. The analysis of female sexuality is always fascinating, but it seems a bit trite when Seligman questions what the response to Joe would have been if she was a man, just to rehash the cliché that men are studs while women are seen as sluts. One only has to compare Nymphomaniac with Steve McQueen’s Shame to see how society views the genders differently. Shame is noticeable in that there is no societal judgement on Michael Fassbender’s character or even a debate on his actions.

Yet the sex addicts played by Fassbender and Gainsbourg suffer from the same anguish. They recognize the norms of society and they judge themselves by those moral standards. Being a sex addict and someone that disregards other humans for personal satisfaction is reprehensible to them.  But von Trier over-eggs the argument, and Nymphomaniac: Volume 2 occasionally suffers because it seems that von Trier feels he has to spell everything out, and sometimes his conclusions are not easy to agree with.

Yet even with these problems, Nymphomaniac: Volume 2 continues to beguile. It’s darker in tone, and is much harder to watch. There are scenes of bondage, humiliation and the inevitable group therapy session. Joe becomes a character who realizes her behavior is destructive and leads to complicated situations. As we are told at the start of a film, the nymph only has a short life before maturing into its adult insect form. Problems arise when humans cannot complete the process.